Review: UNDER THE SHADOW, Jump Scare Terror in the Middle East

Narges Rashidi stars as a worried mother in an unsettling thriller from Iran and director Babak Anvari. 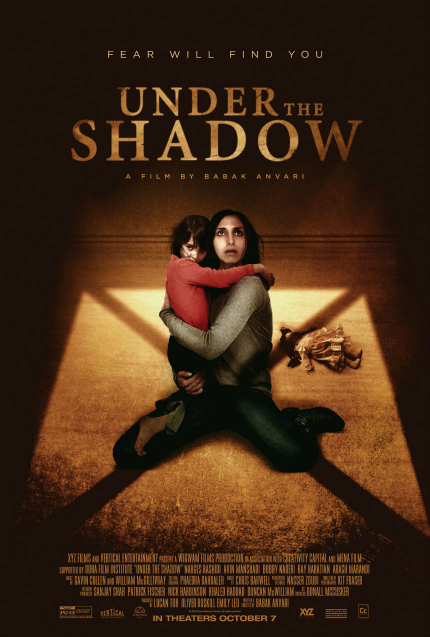 A well-executed jump scare can deliver one of the strongest physical reactions possible in a theater, but by and large, horrors that go bump in the night rely on little more than technical scares. This leads to a parade of cliched titles year after year. Not so with Under the Shadow, which, with its perspicacious use of framing, tension and, of course, loud noises, is equally concerned with presenting a poignant and simple allegory for the plight of women in a society which ill affords them an opportunity to express themselves.

During the Iran-Iraq War of the 1980s, a mother fails to re-enroll in university in Tehran following her history as a student demonstrator. Instead, she raises her child at home as her husband pursues his career as a doctor. But when he is enlisted to serve on the front line, and more and more bombs rain down on the city each day, she begins to be terrorised by a mysterious presence in her building. Refusing to capitulate, she remains in her apartment as, one by one, her neighbours take refuge in the countryside.

Kicking off as a compelling social and family drama, it takes some time before Under the Shadow edges into horror territory, but by the time it does, the socio-political hooks that have been laid add a terrifying amount of heft to the scares that follow. The story takes place in a setting ripe for discussion, using horror tropes as an allegorical tool that combine with the drama to create something greater than the sum of its parts. Iranian cinema has long been incendiary in the arthouse, yet this flirtation with new genres is a new phenomenon that has so far proven to be a potent one, with Under the Shadow arguably following in the footsteps of Persepolis.

Director Babak Anvari, who makes his feature debut with this Sundance-premiered film, weans scares and ideas a plenty throughout the film, yet perhaps his single greatest tool is actress Narges Rashidi. Playing the strong-willed and unwilling housewife, Rashidi conveys a potent feeling of perseverance mingled with helplessness.

While the scares in the film are not necessarily new, and many will compare the setup to recent Australian horror hit The Babadook, Under the Shadow has a handful of genuine jump-out-of-your-skin moments that will be hard to shake off. Also, in a rare feat for a jump scare horror, Anvari's film nails the landing, with a strong message and a quick exit.

Review originally published during BiFan in July 2016. The film will open in select theaters in the U.S. and will also be available to watch via various Video On Demand platforms on Friday, October 7.