Destroy All Monsters: HBO's WESTWORLD and the "Entertainment" of Sexual Violence 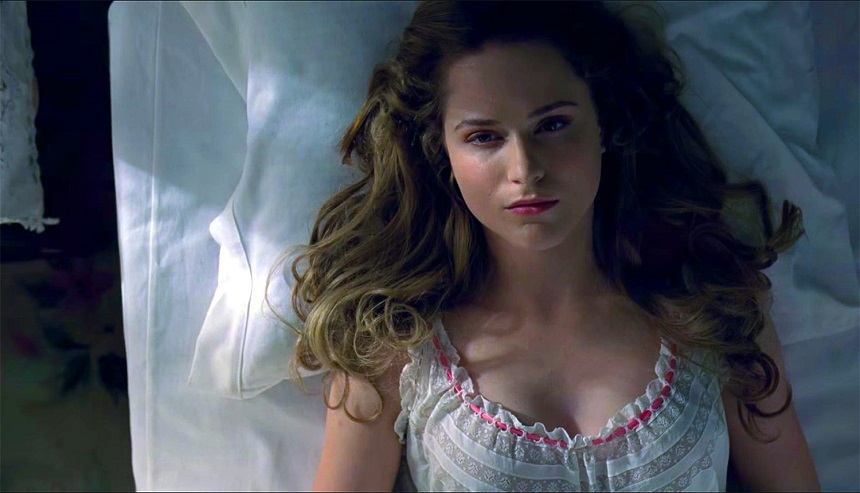 Trigger warning, sexual violence (and spoilers too, I guess, if you don't want the first fifteen minutes of the first episode of Westworld spoiled for you): at the end of the Westworld pilot's extended opening fake-out, a human man drags a robot female into a barn, presumably to rape her. He tells her, as he is doing so, that he has paid for this experience; he tells her, further, that he prefers that she fight him... and that he has paid for that too.

This is the setup of the show: in an Old West theme park called Westworld, populated by nearly perfect humanoid robots ("Hosts"), human customers ("Newcomers") play out a variety of storylines, which they've paid for. The source is Michael Crichton's 1973 film of the same name. He later revised its robo-theme-park-run-amuck conceit into Jurassic Park. The reprogrammable, erasable "people" - who might not be as reprogrammable or erasable as we think, especially given that we're using them for sex and violence - formed a similar spine for Joss Whedon's imperfect, but perfectly fascinating, Dollhouse.

As in Dollhouse, there is the suggestion even at this early stage that the robots - who are meant to be complete blank slates every time their program starts up in the morning - retain some vestiges of their previous experiences. The park's creator, Dr. Ford (Anthony Hopkins), might even be tinkering with those vestiges by way of a new operating system upgrade, which installs "reveries" - performative nostalgic behaviour - built in part on those supposedly absent memories.

So: we have a phalanx of robot playthings, who may or may not remember all the horrible things their human customers did to them in the name of getting off. And, while we're here, and whether the robots can remember the experiences or not, we have the disturbing question of just what people would do in a situation that permits them to, literally, get away with murder. It's just a fantasy, after all.

In Westworld's pilot, the primary tensions of the show are sketched out confidently and with an overriding sense that the creators (Jonathan Nolan and Lisa Joy, working with J.J. Abrams) are fully aware of the vast moral implications of the scenario, and have every intention of mining those implications for their thematic weight going forward.

In other words, they are - presumably at this point - going to earn that opening rape, in reverse. It's a massive, context-setting assault on the audience in the show's first handful of minutes, but it's clearly there with significant purpose going forward, not just in the rest of the episode (which is excellent), but - unless the show completely shits the bed - in the episodes to come, as well.

HBO, as fans will know, is coming up on a kind of crossroads; they have two seasons left of their flagship series, Game of Thrones, and need to repopulate their stable in order to continue to, well, be HBO.

They're also a network whose selfsame flagship show leads the conversation on the free and willing depiction of rape.

At least initially, Westworld seems to be positioning itself as a successor, and not just in the field of gruesomeness (more blood splatters in the premiere than the entirety of "The Battle of the Bastards!") and titillation (oh, there be boobies... and in seeming answer to the other leading charge against Game of Thrones, Westworld also gives more dick per hour than any television series since Two and a Half Men).

It's also likely that by dint of its very conceit, Westworld will be able to explore the morality of such "entertainment" in the first place.

It's built into the series' mission statement, a list of questions which park honcho Bernard Lowe (Jeffrey Wright) asks Dolores (Evan Rachel Wood), intercut with the scenes that lead up to and include her assault. Bernard tells Dolores, who is back in the shop for repairs: "You, and everyone you know, were built to gratify the desires of those who pay to visit your world."

Into this conceit strides the Gunslinger (Ed Harris), a man in black from the real world who has paid for the privilege of raping Dolores at the tail end of a home invasion fantasy, which we watch play out as the series gets started. This character is at work on a larger mission, the outline of which we do not yet know. But he makes clear that he has visited Westworld many times - has enjoyed this particular "fantasy," with Dolores, many times - and as such, lays the table for the unease at the core of Westworld, and by extension, our relationship with vicarious adventures, misdeeds, bad behaviour, and outright cruelty as part of our weekly diet of entertainment.

It literalizes the unspoken fact behind Game of Thrones' history of onscreen violence and sexual assault: we're all here paying for this, aren't we? (Well, most of us anyway.) We are choosing to be entertained in this way. Unless you're The Mary Sue, no amount of outraged think pieces in the world changes the fact that you keep tuning in, keep objecting, to something that just keeps serving up bloodshed, exploitation, and rape.

As we see Teddy (James Marsden, weaponizing his career-long penchant for playing second banana fops - "the loser," as the Gunslinger calls him) riding into town on a train, we overhear a couple of Newcomers discussing previous adventures in Westworld. One of them mentions that his first visit was fairly benign, but on his second time in the park, he "went straight evil," and those were the "best two weeks of my life." This is uncannily reasonable: given the opportunity to play a big, live-action video game with no actual stakes or consequences (that we know about), how many among us would choose to be a white hat? People get Voldemort's Dark Mark tattooed on their forearms. There are five incarnations of Grand Theft Auto. The best television series of the past decade was about a family man who becomes a meth kingpin. And on, and on, and on.

When Teddy stops by the bar for a shot of rye whiskey, a prostitute offers him her services. This is before we have learned that Teddy, too, is a robot; he demurs, and says that he'd rather earn a woman's affection than pay for it. The madam, played by Thandie Newton (we don't yet know if she's robot or human, though I'd presume the latter), assures him that he's always paying for it, and that the whorehouse is just a slightly more up-front mechanism for such.

Jokes notwithstanding, these vulgar entertainments must be similar in their intents. I don't mean to imply that every human is running around with gruesome fantasies about the worst things we can do to one another, that our chosen forms of pop culture merely exploit for dollars. It's realistic to say, however, that we are all in a relationship with those darkest aspects of human behaviour - and that pop culture articulates those anxieties in straight-forward ways, which can be bought, framed, discussed, and dismissed as needed.

The default answer for Game of Thrones' brutality has always been that it takes place in a world where such things are normal - as though we live in a world where they aren't. Westworld spins a similar historical context - it will be interesting to see how it builds upon and refracts the gutter poetry of HBO's other notable Western, Deadwood - but expands outward in concentric circles (literally, in the monitoring room) to recontextualize that history in a science fiction future where we may (per Dr. Ford) have reached the end of our evolution as a species... and yet are still entertaining ourselves by visiting our gross impulses upon weaker, less agented creatures who can't do anything but serve our pleasure.

So, once again, we live in a world where such brutality is normal; it just has that New Apple Smell, and a bunch of euphemisms around rights and personhood. It's a rich stew of ideas for the inaugural hour of any TV show, and if the series proper lives up, Westworld has some important conversations to have about what, exactly, we do for fun.

Do you feel this content is inappropriate or infringes upon your rights? Click here to report it, or see our DMCA policy.
Game of ThronesHBOJJ AbramsJonathan NolanWestworld