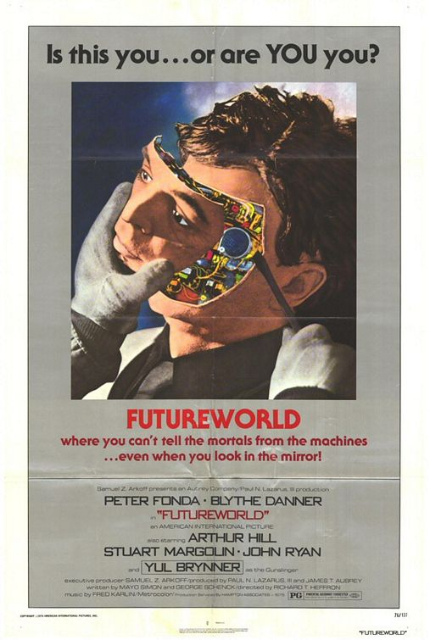 Michael Crichton's Westworld (1973) inspired a direct sequel in which he was not involved, yet retains a connection to his work that may feel faintly familiar to anyone watching the third season of HBO's adaptation under the creative direction of Lisa Joy and Jonathan Nolan.

In the paperback edition of Crichton's script, published by Bantam Books in March 1974, Crichton points out that it is "the version I had two days before shooting began. At that time, MGM cut the schedule by three days. I refused to shoot the script as written, and responded by cutting three days of work. The deleted scenes included the salesroom sequences and the bank robbery."

One of those deleted scenes featured a salesman showing potential investors a slideshow presentation, including the following dialogue:

"But what of the future? This is the theme of our fourth world, still under construction: Future World.

"Here we have used technology to create thrills that never have been, thrills of the future. Visitors will stay in an ultramodern resort complex here. The surrounding environment will be safe. There will be restaurants, casinos, and bordellos for both sexes, technologically advanced of course."

Following the completion of Westworld, the producers (including Paul Lazarus) hired Crichton to write an original script, which became Jeannot Swarc's Extreme Close Up (1973). Reportedly, though, Crichton was not interested in doing a sequel to Westworld, so MGM turned to producer Paul Lazarus III, who says he came up with a premise and then hired a writer to develop it into a screenplay. Ultimately, MGM passed on the project and it ended up at American International Pictures. (Source: Wikipedia.)

Released in U.S. theaters on August 13, 1976, the poster and trailer for Futureworld looked tremendously cool to my teenage eyes and I was very happy when my older brother indulged my love for science-fiction and allowed me to accompany him and a friend to a theater to experience it for ourselves. Frankly, however, other than the opening images -- showcasing Peter Fonda, lying naked on a table -- little, if anything, embedded into my memory.

A recent viewing confirmed that the movie is, indeed, a light, mostly forgettable genre exercise. Fonda stars as Chuck Browning, a newspaper journalist who reported on the Westworld disaster.

The amusement park has been reopened by the Delos Corporation and an executive named Duffy (Arthur Hill, who had starred in The Andromeda Strain (1971), based on Michael Crichton's novel) makes a deal with a media conglomerate to invite two of its employees -- Chuck Browning and television correspondent Tracy Ballard (Blythe Danner) -- to tour the all-new Futureworld, with an all-access promise and the hope that they will bring positive publicity to the world.

Chuck and Tracy have a checkered past together, to the point that Chuck annoys her with a pet name ('Socks'), and thus the film often feels like a would-be romantic comedy, except with robots and a nefarious corporation that claims Futureworld is a place where nothing can possibly go wrong (again, like in the first movie).

Directed by Richard T. Heffron, who had helmed memorable TV movies like The California Kid (with Martin Sheen) and Locusts (with Ron Howard), the film is based on a screenplay that is credited to Mayo Simon (Marooned, Phase IV) and George Schenck (episodic television shows).

The plot follows Chuck and Tracy on their investigation, which eventually lands in territory best described as "corporations are evil and not to be trusted, even if we don't know exactly what they're doing or planning." The pacing is slack, and moments that lack logic keep popping up, along the lines of "why on Earth would anyone do that?" Nuggets of good ideas remain, however, begging to be expanded upon (which, to its credit, the HBO series has apparently done).

Even with these reservations, I enjoyed the cool, relaxed performances by Fonda and Danner. They don't generate much heat, as far as romantic sparks are concerned, but they certainly come across as basically decent people who treat others in a very fair manner. Arthur Hill is a fine embodiment of 70s corporate thought, a decent man with surely mysterious and deceitful intentions, while John P. Ryan provides a pleasantly untrustworthy menace in his portrayal of lead scientist Dr. Schneider, who looks upon the media representatives with a cocked eye.

Two performances of special note merit attention. First, Stuart Margolin shows up midway through the story as a technician with a robotic best pal. Margolin brings a welcome dose of vitality to his scenes and enlivens the film. (Of interest, director Heffron had previously directed an episode of TV's great The Rockford Files in which Margolin appeared as Angel Martin; might Heffron and Margolin have made a connection then?)

And Yul Brynner makes a cameo in one of his final appearances on the big screen, in a truly bizarre sequence that feels like it comes out of nowhere (watch the clip below).

Futureworld may not be more than average, but I remember feeling satisfied when I saw it for the first time back in 1976. It remains fascinating for dedicated fans of the actors involved -- seriously, it's always a treat to see Stuart Margolin -- and/or science-fiction devotees.

Released in U.S. theaters August 13, 1976. Most recently viewed February 28, 2020, via Amazon Prime Video, where, sadly, it is no longer available to watch. It is available to rent or buy on various platforms, including Amazon, FandangoNow and Vudu. The Blu-ray edition, released in March 2013, is available for purchase at Shout! Factory as of this writing. 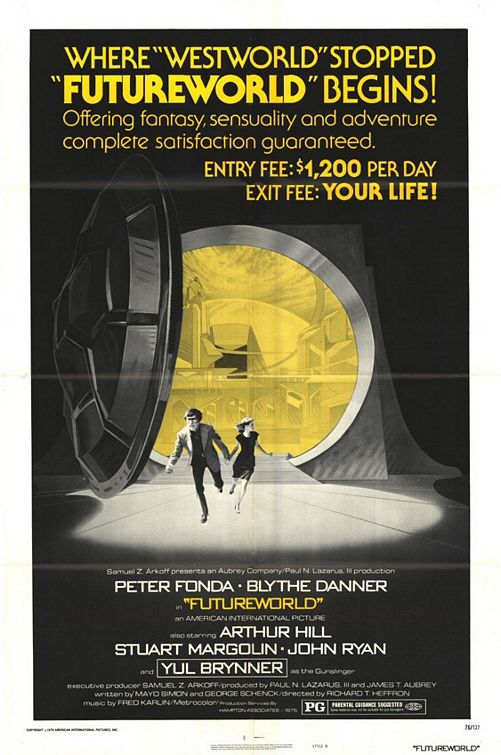 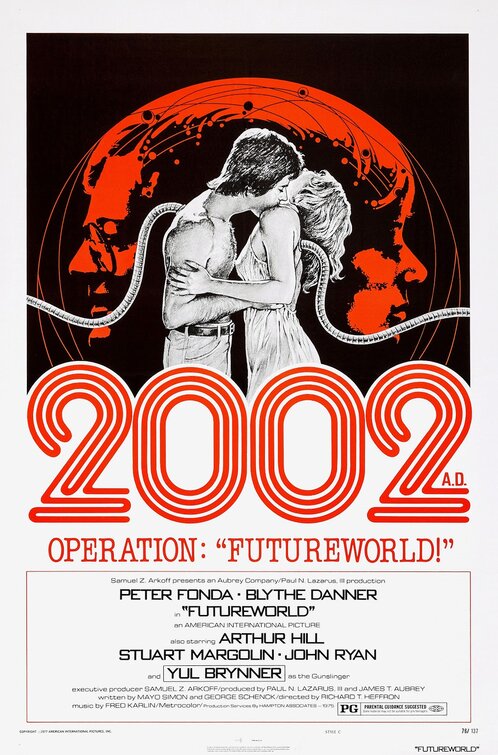 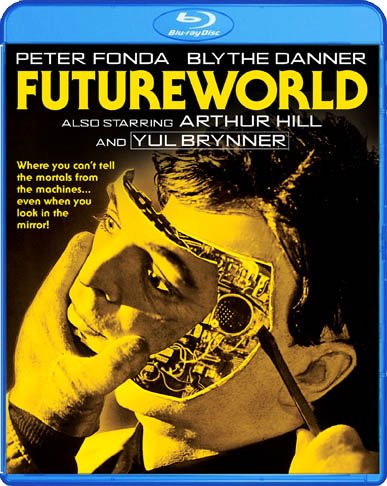 Do you feel this content is inappropriate or infringes upon your rights? Click here to report it, or see our DMCA policy.
Arthur HillBlythe DannerMichael CrichtonPeter FondaRichard Heffron