Destroy All Monsters: Go Big, GAME OF THRONES, Before You Go Home 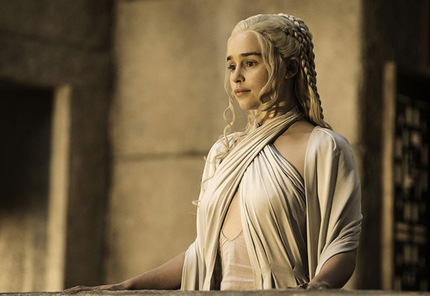 Quietly over the weekend, several IMAX theatres played two episodes of HBO's Game of Thrones on their very big screens - and grossed $1.5 million.

It's not a huge amount of money. It doesn't even fractionally compare to American Sniper's gargantuan tally on its third weekend, nor did the Game of Thrones event make any media noise on par with the Super Bowl. (And no, it's not the first time someone's put a TV show on a big screen. Doctor Who's been day-and-dating its significant episodes at local multiplexes for years.)

In spite of all this, the Game of Thrones: The IMAX Experience experiment is a unique bellwether of where we are right now in our relationship to filmed entertainment.

For one, it demonstrates categorically what we've all been saying instinctively since around the first season of Breaking Bad: cinema went to television. When the "middle class" of motion pictures was gutted in favour of a wide schism between low-budget "serious" films and ultra-high-end comic book movies, the mid-brow pictures went to TV.

Necessarily, perhaps, it brought the artistry with it. TV shows look like movies now; more importantly, TV directors cannily and expertly use the language of cinema to enrich and layer what are otherwise necessarily small-focus, character-driven stories with an in-built tendency towards boilerplating.

That Game of Thrones could withstand the big-screen experience is a testament to the visual evolution of the show, a series whose first season seemed to barely be able to frame four knights in a single shot before running out of budget.

Admittedly, the episodes screened included "The Watchers on the Wall," the episode from this past season directed by Neil Marshall that featured, for all intents and purposes, a Lord of the Rings-scale siege battle led by heroic sad-sack Jon Snow. Game of Thrones has not, to date, put forth a more spectacular visual event, so the episode lent itself to a big-screen treatment all along. (The heat is on them, now, to up the stakes in Seasons Five and Six.)

Second point: The IMAX Experience demonstrates what Gone Girl reminded us of in the fall. The middle class may be out of the cinemas, but that doesn't mean the market for it isn't still there.

In a desert landscape bereft of those middle movies - movies neither as high-minded as Selma nor as youth-skewing as Guardians of the Galaxy - Gone Girl made a fortune, for being lurid and entertaining in a fashion where being alive for thirty or more years was an enhancement to one's ability to enjoy the story, not a detraction. At home, Game of Thrones is arguably the entertainment mega-property right now for those same middle-class, just-below-middle-age adults.

That the series could do well on the big screen should come as no surprise; if anything, the big screen experience was exactly what was missing from Game of Thrones all along. We were content to watch it in our living rooms, but unconsciously, perhaps we always saw it as a movie.

On minimal marketing and based on two episodes that (imaginably) every single person who attended The IMAX Experience on the weekend had already seen, this experiment drew a million and a half dollars. That's fascinating, and combined with cinematic television's potential interchangeability with traditional filmmaking, suggests a further breakdown of the walls between media.

With Amazon and Netflix both in the game to produce and license traditional motion pictures while still retaining their potential day-and-date streaming opportunities, and with the original television networks all but expired under the weight of the boutique cable outfits, the question of who produces media is changing rapidly.

Now that signature cable outfit HBO is cramming itself into the streaming media space while simultaneously experimenting with big-screen distribution for "TV" content, the lines aren't just blurred; they're gone.

Third and final point, and personal advice time: if HBO knows what they're doing, they'll immediately do away with the notion of concluding Game of Thrones' storyline in the series' seventh and final (televised) season. The groundwork isn't there for anything other than an abbreviated finale, and George R.R. Martin is still wandering around his creative wilderness trying to figure out how to reel back his one thousand speaking characters into something resembling a workable climax. (Martin's publisher confirmed this week that there will be no Book Six in 2015.)

The advice is this: wrap Game of Thrones on television at the end of Season Seven with a gargantuan, audience-strangling cliffhanger, and then move immediately into production on a trilogy of Game of Thrones motion pictures developed at just under the Lord of the Rings scale and marketed for adults. I suspect by the time they're ready for release, they're going to earn a hell of a lot more than $1.5M.