Destroy All Monsters: Wane Of THRONES 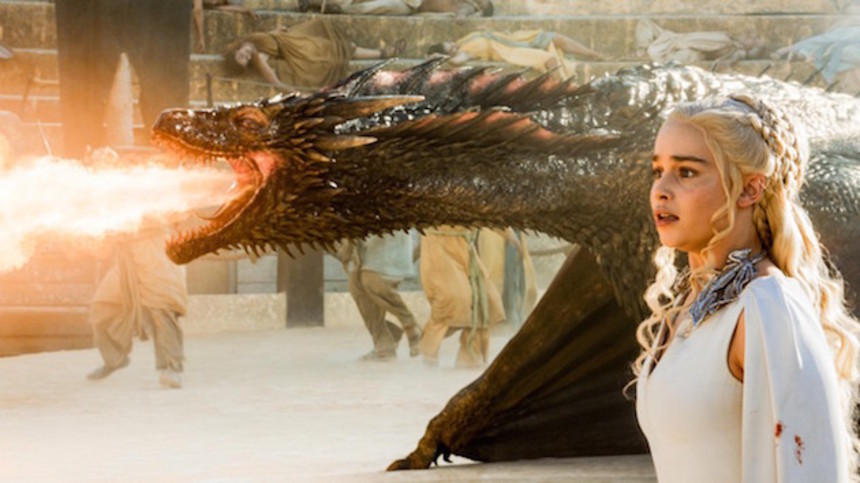 There have only been two extraordinary sequences on Game Of Thrones this season (with one episode remaining), and they've happened in the last two weeks: the massive and surprising battle at Hardhome in episode 8, and the smooth and unsurprising arena scene in episode 9.

These were big scenes, told visually, paying off both the series' fealty to its book sources, and its extrapolation beyond those books. The two scenes are the season in microcosm: simultaneously chained by and unbound from the writing of George R.R. Martin, and throwing into day-glo relief the degree to which the rest of Season Five of Game Of Thrones has really, really sucked.

I've gone on the (tumultuous) record previously, saying that my money was on Game Of Thrones telling Martin's A Song Of Ice And Fire story better than Martin could. Part of this was mere logistics: newsflashes whatever, but I will personally buy Martin a shiny Iron Throne toilet if he ever writes an ending to this book series of his.

The series seemed like the perfect antidote, taking the parts of Martin's storytelling that worked - the worldbuilding, the dramatic conflicts, and the penchant for slaughtering the principal cast wholesale - and dispensing with the books' enormous failings.

(Those failings, for those keeping score: an ever-burgeoning narrative that bears no supporting weight for its Catholic-rabbit-multiplying storylines; a cast of speaking parts that has, for reals, been counted in the four digit numbers; and a willingness, particularly in the latter novels, to never waste an opportunity to unfold a plot point across six chapters when any sane or rational writer might merely have used one.)

Plus, Game Of Thrones had boobs. Lotsa boobs. Like, everywhere!

The opportunity for Game Of Thrones' showrunners, Benioff and Weiss, was to take those original table stakes and then, halfway through, chuck the devotion to the source books and just play out the rest of the throne game like a throne player should: to win. Instead, they seem to have chosen the other thing.

(Plus, boobs. Lotsa boobs. Like, seriously, enough with the boobs.)

In this week's episode, "The Dance of Dragons," an adolescent princess is burned alive in front of an audience of onlookers, in what became an uncomfortably precise allegory for what's been going on with the series itself.

Within the narrative, the Princess Shireen is sacrificed to the Red God or whatever, because her royal blood can act as magic fuel to propel Stannis' military conquest of Westeros forward.

Out here in the real world, I couldn't help but feel like Kerry Ingram was screaming her ever-lovin' lungs out so that we might feel something, anything, as this moribund season dragged through yet another desperation play for our interest. As has, unfortunately, been this season's all-too-frequent calling card, the only real reaction aroused by the Shireen stunt was disgust.

The majority of the content we've seen on the series this year seems like proof that the wheels have come off the cart. On the more trivial side of things, the series has gone ahead and duplicated the books' muddy-headedness by introducing a whole country and tract of characters this season (Dorne) whose presence serves no visible purpose and whose plotting is plodding, to say the least.

And on the less trivial side, as has been widely discussed, the natural end-point to Game Of Thrones' series-long locker-room fascination with tits and ass seemed to arrive in full force this season (with a healthy setup in Season Four, to be sure) when the show ran clean out of semi-subversive sexual acts to portray on screen, and so decided to portray the rape of a teenaged principal character on her wedding night.

There's no longer much denying that Game Of Thrones, either by creative design, pathological myopia, or sheer bloody-mindedness, has become Rape Culture: The Series.

Episode 9, rather than Sansa's rape in Episode 6, was the clincher. Who are the female characters in Episode 9?

With only a couple of exceptions, to be female in Game of Thrones is to be an ambulatory fuck-puppet whose agency is either controlled or heavily influenced by the men in her immediate orbit. And with each opportunity to generate meaning and conflict around this distressingly real-world power dynamic, Thrones' only response has been to double down, double down, and double down again on the degree to which every woman's body is mere chattel to be exploited for the various motivations of the series' male characters.

I think my reliable friend Sasha said it best:

"If we put some dragons in it, no one will notice when we rape and murder young girls." - #GameOfThrones writers' room? Probably.

Taken in a straight run in "The Dance of Dragons," the evidence isn't just damning, it's so damning as to become pedantic. But that is what the rest of Game Of Thrones has almost uniformly become this year: pedantic, predictable, plotless and probably pointless.

It's bloody disappointing from a show that was (sorry!) game-changing in its day, a day which was only a few years ago. Season Five has tied up the novels' narrative threads in tighter and more constructive ways, but without arriving at a clear sense of storytelling movement. It's also vastly over-indexed on Westeros' ick factor, and has thereby turned an admittedly gritty fantasy construction into a space that no longer feels safe for many members of its audience.

This latter part, I think, may be the greatest shame. While I can admire the artistic project at work within Martin's de-glamourization of a whole fusillade of fantasy tropes, the tension between Game Of Thrones' deconstruction of the genre and the creative/imaginative potential of fantasy in general as a common theoretical meeting ground for people may finally have snapped.

Maybe Game Of Thrones never wanted to be a metaphor for anything, or a made-up universe for people to safely project their real-world shit into and come out the other side with some articulated meaning. Maybe it never even wanted to be an "ooh, ah!" experience of CGI battles and pissed-off dragons.

But for me, I'll stick with the Hardhome battle and Daenerys riding Drogon - the only two times this season when Game Of Thrones didn't seem like an extended exercise in frivolous hurt.

Do you feel this content is inappropriate or infringes upon your rights? Click here to report it, or see our DMCA policy.
A Song of Ice and FireGame of Thrones