Critical Distance: In This Movie, Your Sweet Is My Sour 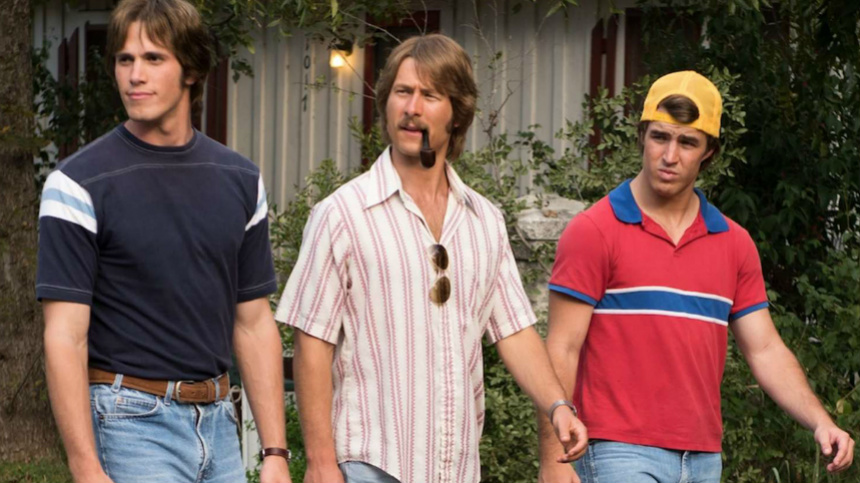 In 1979, I drove a 1965 Chevrolet Corvair from my family home in the San Fernando Valley to my job in the Wilshire district of Los Angeles every day. Depending on traffic, the commute took 30-45 minutes. My car only had an AM radio that only had five pre-set buttons, so I learned to punch between the Top 40 stations to minimize commercial interruption. And in May I grew to hate "My Sharona" by The Knack.

The song kicks off Richard Linklater's Everybody Wants Some!! and I knew immediately that I was in trouble.

After that distasteful opening, I struggled to be open to the film, but in its warm embrace of jock culture and the mainstream world at large, I soon realized it wasn't for me, an outsider who never wanted to be an outsider. I always wanted to be a professional athlete but my body never cooperated; I never grew tall enough and never developed the necessary musculature and never had any natural talents that caught the eye of a sympathetic coach. So my resentment festered for years as taller peers mocked my inability to catch a fly ball on the baseball field and knocked me down on the football field and complained about my foul-happy style on the basketball court and sped past me on the running track.

By 1977, my older brother was gone more frequently and I began tuning in the late-night dial on his home stereo, eventually discovering FM stations that were more to my newly-found taste. Punk rock was angry and discordant and more in tune with my adolescent personality. Foreign films and old films and odd films would start affecting me and my life the following year, after I got my driver's license and decided against college and got my first full-time job.

But in 1977 and 1978, my teenage rebellion was fueled by punk. Yes, as Linklater's film states plainly, some music that was labeled "new wave," like Elvis Costello and The Cars, was fine. (Costello's "I'm Not Angry" became my personal theme song during that period.) As I slowly built my record collection, and discovered import 45s and LPs, I heard a clear distinction in the spirit behind the music. Influenced by local alternative publications Los Angeles Weekly, LA Reader, and Slash, as well as national rags like Trouser Press, I began to distinguish between regional rock scenes and felt defensive and protective about local bands.

And then "new wave" rose its ugly head.

Theoretically, I had no problem with zippy pop tunes coated in candy, especially those with crunchy guitars. As local punk bands struggled to gain national recognition, however, and new wave bands seemingly came out of nowhere to land contracts and release records, the festering resentment I felt for high school jocks easily transferred to new wave bands. They took the easy, commercial route, sanding off the edges of punk and singing catchy songs with easy to remember hooks. Their jeans were new and not patched up, or they wore suits or matching clothing. In short, they were the devil, and members of The Knack were the embodiment of this pernicious evil.

"My Sharona" was their slogan, and its very popularity -- over songs by much more deserving bands that played music from their guts instead of their groins -- was a slap in the face, every freakin' time I heard it. And it played over and over and over; it seemed like every time I turned on the stupid AM radio in my car, "My Sharona" was starting or finishing or in the middle, and it blared out of every car I passed on the street on the way to the freeway on the way to a job that I increasingly disliked and that eventually drove me mad.

Buying my own records helped salve my wounds, and that year my friend Jeff introduced me to repertory movie theaters and a whole new world opened up, and I survived 1979 and 1980 and 1981 and so forth and so on. I realized that stringing words together was something I had to do in order to survive, emotionally if not financially. Around the same time, Richard Linklater discovered he needed to become a filmmaker, eventually resulting in his first feature, Slacker.

Now, I'm in no way comparing my puny, scrawny words to Linklater's combination of talent, ability, and artistry, which he's demonstrated time and time again over the past 25 years. Maybe that's why it came as such a shock to me to hear "My Sharona" in his latest film, without even a suggestion of irony. When, after an hour of celebrating the type of brawny youth and top 40 hits that infuriated and abused me, the lead character sees an old friend from high school who's now a punk, I cheered. When we hear the rough, chugging, angry shouts of "Alternative Ulster" by Stiff Little Fingers, I sighed a breathe of relief. I thought, now we're getting somewhere. Now we're at the point where the poor, naive lead character will come to his senses, recognize a kindred spirit, and throw off the shackles of middle-class conformity.

Maybe that will be in a future movie that the director makes, In this one, the jocks go to a punk party and laugh it off as nothing more than a failed attempt on their part to get laid. They retreat and the lead character decides to make a romantic gesture to someone and they talk pretty and smart and witty and the athletes become a team and by the end everybody is happy and smiling and it made me want to throw up. For me, the film is nauseating garbage, but your mileage may vary; help yourself; and so forth and so on.

Everybody Wants Some!! is available on Blu-ray and DVD. This column reflects the personal opinions of the writer and is not intended as a review of the film in question.

More about Everybody Wants Some!!