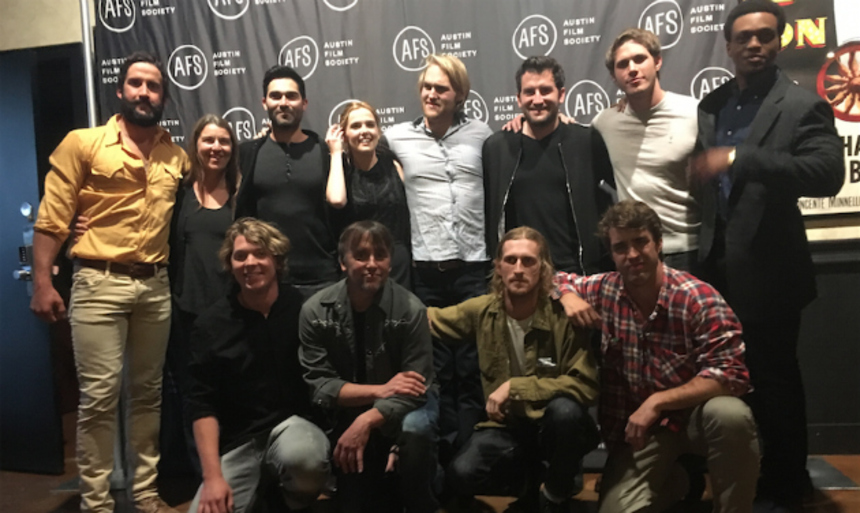 The song lyric Richard Linklater borrows for the tagline of his new film, Everybody Wants Some!!, comes from the two-hit-wonder band, Trooper. In the film, the song title is quoted by one of the team’s more aware players. “We’re here for a good time - not a long time”.

As in Everybody Wants Some!!'s spiritual predecessor, music is an integral character in his college tale - and I use the word ‘tale’ loosely. But also like in Dazed and Confused, despite its double platinum soundtrack, the music is not at the forefront. It acts as the soundtrack of his characters' lives, providing atmosphere for the good times of pedestrian hanging out that takes precedence. There’s the music they dance to, thrash to, smoke to, think to, and grow to. We all take pleasure in attributing apropos lyrics to scenarios so to lend an articulate truth to the experience of l-i-v-i-n, punctuating crucial moments.

Linklater has always had an anti-approach to the concept of a crucial moment and perhaps none of his films demonstrate this more than his ‘hangout’ films. Dazed and Everybody Wants Some!! may be the clearest examples of his unique genre, but almost all of his films similarly feature people at different stages of their lives hanging out. Whether this hanging out consists of high-brow themes of adult love or the wistfully low-brow chills of college, the crucial element of the scene has always been characters enjoying one another’s company.

By being faithful to the un-extraordinary way in which everyday life occurs, Linklater’s moments of small scale glory are measured by stimulating conversation and laughter and achieve a feeling akin to the actual joy we take in being alive on a minute to minute basis, through the loving lens of a great enjoyer.

With all that said, it is such a treat to see Linklater return to ‘the best years of our life”. This time, released from the angst of Dazed’s teenage years, the crew of Everybody Wants Some!! are liberated from the shackles of their childhood homes and free to do what they want, when they want. Living in an Animal House united by their love of baseball, the freshmen, sophomores, and seniors are free to slack, drink, score, ignore rules, succeed, fail.

Their coach sternly forbids them to drink and copulate in the house and a lesser film (every other film in the college genre) would punish their disregard for the straight and narrow, but Linklater is utterly disinterested in conflict. He is more concerned with a feeling - a moment in time where anything seems possible.

If I were to borrow a song lyric for my own college years, I might take from Arthur Lee’s “Everybody’s Gotta Live” (...before you know the reason why.) Intellectually, those days weren’t always filled with the most stimulating ideas, but they did offer bouts of pure unadulterated fun. On the one hand, the overwhelming lack of surface substance may make the times seem devoid of any real meaning. Similarly, intellectual snoots may wonder what Linklater’s driving at with his college ball bromance. But it’s a mistake to think there’s not something powerful to be said for good times, particularly at one of the most exciting phases growing up has to offer, and this is where Linklater manages to profoundly rewrite the “college comedy.” Fun isn’t what happens between substantial moments, fun is substance. It’s bittersweetly amusing how the further we get from our fancy free days of youth, the better we understand, “we’re here for a good time.”

At the Austin Film Society premiere of Everybody Wants Some!!, I was able to sit down with Linklater for a very brief chat:

ScreenAnarchy: How do you cast for something like this?

Richard Linklater: Very specifically. I think I've gotten better at it over the years. It's not just the right actors, it's the right mentality for the movie.

Yeah. Who's going to gel? This is so much about a team and the come together, so they need that team vibe. I didn’t want people who felt like they were more about themselves. Other movies, you can do that, that's fine. That's kind of who they are.

This one I was like, "I need guys. People who have been on teams.” It's kind of a team sports mentality to be there for each other. It made an ideal ensemble experience because they all knew how to act. Not just act, but act with a group and with each other.

To what extent is it casting the right person rather than the best actor?

I felt like Tex Schramm, the General Manager of the Cowboys. He would just draft the best athletes, and then figure out what position they would play. He wrote Pete Gent a note when he hadn't even played college football. He was a great basketball player at the time. He said, "We want you on the team. We'll make you a tight end."
I always told the guys like, "You're fun. Maybe you can play Brumley. No. No, you'll play Coma. No, okay, you'll play ..." There were kind of these less written parts - I'd say the five least written parts - and I'm especially proud of how they developed and didn't get lost. In fact those parts all got bigger and more distinct because of the actor and because of the generosity of the bigger part guys. They were like, "Oh yeah, a team."
Everything was about that, so you would take some line away from somebody and say, "You know, I don't think your character would say that." They didn't go, "Oh, man. He just cut out three lines of mine." You know? Never. They were like, "Yeah, I probably wouldn't," because they knew they were going to get something else in return, so there was a certain generosity and spirit amongst them that was super-wonderful.

I know this film is at least somehwat autobiographical, at least maybe in spirit.

Yeah, I admit it.

That being said, how do you find the balance between memory and presentation of memory?

Working off the memory is the main thing, but it's all in the details. You know? In fact, isn’t all of art that?

Nothing in this movie is outside of a lot of people's experience - so much of art isn't. It's just about what you do with that experience and how you replicate, or how it filters over the years, and what it ends up being back here (pointing at head) it manifests itself in a new form, so that's kind of the magic of it. That was kind of the magic I'm feeling all along. When I'm doing one of these kind of memory films, it's a unique vibe of something.

Yeah, no, some of the guys I'd say loosely. Yeah, it's inspired by certain guys, but it's also kind of a group composite a little bit.

In DAZED AND CONFUSED, the characters are like, "If I ever start referring to these as the best years of my life - remind me to kill myself,” but in EVERYBODY WANTS SOME!!, it's just a totally different vibe altogether. Can you put into words what you loved about the college phase of your life?

College is so much more fun than high school and it's because of the freedom. You know? That's my central metaphor here. I was like, "What is the difference?"

High school was restrictions and oppression. This was unabashed freedom. You're away from home. You can stay up all night. You can eat and drink whatever you'd like. No one's telling you to turn down your stereo, unless it's a roommate, and then you've got to deal with that.

It felt exhilarating and at the same time like a new level of responsibility. Well, you don't have to be in college. If you flunk out then you go get a job, so it's like, "Oh, my decisions actually matter to me for the first time. It's on me. My life is now mine."

It's what you've been working for all these years, but be careful what you wish for because there's a personal responsibility and accountability to yourself. The person you wish to become, the person you are, and that plays out every day, every choice you make. To go to the bar or not. To hang out. A lot of it's peer pressure, but how do you...

That's what the movie's about, navigating that transitional period and the notion of identity. Who are you? Who do you want to be?

Do you feel this content is inappropriate or infringes upon your rights? Click here to report it, or see our DMCA policy.
AFSAustin Film SocietyDazed and ConfusedEverybody Wants Some!!Richard Linklater

More about Everybody Wants Some!!

More about Everybody Wants Some