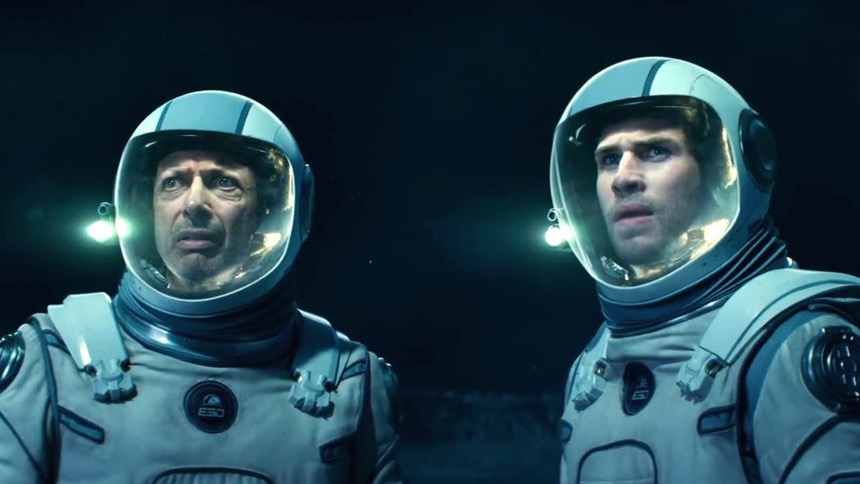 The first movie I remember renting was Independence Day, and during the 48 hours I had it, I probably watched it six or seven times. For a young kid, the charisma of its leads, the iconic imagery of its set pieces and its simple good vs. evil plotting added up to an irresistible package. 20 years on, director Roland Emmerich and producer Dean Devlin have returned to the well for Independence Day: Resurgence. The original was a fun, campy b-movie with a huge budget, but this sequel is an utter failure in almost every regard. So much so, that it makes me wish the aliens had won at the end of the first movie. That would have robbed us of ID4's fist-pumping finale, but also saved us from this pricey monstrosity.

20 years after the people of Earth came together to repel alien invaders, the human race once again faces extinction. Ex-President Whitmore (Bill Pullman) and the kooky Dr. Brakish Okun (Brent Spiner), who apparently didn't die in the first instalment, are both getting headaches and premonitions of an alien invasion. A downed spaceship in Africa has sent out a distress call and not long after a mysterious spherical ship appears before a defence base on the moon and is promptly shot down on orders from the United Nations. Science whiz David Levinson (Jeff Goldblum) hops on a ride to the moon, along with a foxy French scientist and an African warlord, to inspect the felled craft. Then the real threat comes, a mothership 3,000 miles wide that plants itself over the entire Atlantic Ocean.

Special effects have come a long way in 20 years and the team behind Resurgence clearly felt the need to up the ante. While the new elements are certainly bigger, they're also clunky and silly, but not in a fun way. Replacing the unforgettable images of monuments being blown to smithereens by an alien beam of light are jumbled vistas of cities being torn apart by the gravitational pull of the extravagantly large alien ship.

Gone too is the charm of the original's cast. Will Smith's cocky pilot has died in the interim between the films and is replaced by his grown up stepson, also a pilot, played with the charisma of an office chair by Jessie T. Usher. Other new additions include a woefully drab Liam Hemsworth as a brave orphan pilot, a gormless Maika Monroe as Whitmore's grownup daughter/presidential aide/pilot and HK star Angelababy as, you guessed it, a pilot. A crass attempt to woo the Chinese film market, Angelababy's character is a very poor fit in an already leaden cast of new recruits and is exacerbated by some bad Chinese product placement (space milk, anyone?). Returning cast members fare marginally better, with Goldblum somewhat charming though fed less convincing one-liners, Judd Hirsh tottering around for no ostensible reason and Bill Pullman seeming a little raspier and the worse for wear. William Fichtner is fine as top military brass and poor Charlotte Gainsbourg is given nothing to do as Goldblum's maybe love interest.

The plot of Resurgence doesn't make a great deal of sense, but this issue didn't hurt the first film, nor did its corny dialogue. What does hurt is the absence of fun. The plotting is murky, elements fly in thick and fast without being given the time to stick and we're never given the chance to develop any fondness for the characters. Without ID4's simplicity and its appealing characters it's hard to imagine young viewers falling in love with this lazy followup in the same way.

An awkward summer tentpole that fails to match its hefty price tag with any heart or innovation, Independence Day: Resurgence spends 90 minutes vainly swinging for the fences before falling back on its roots in an overly familiar final reel.