Critical Distance: A TRANSPARENT Look At MOZART IN THE JUNGLE 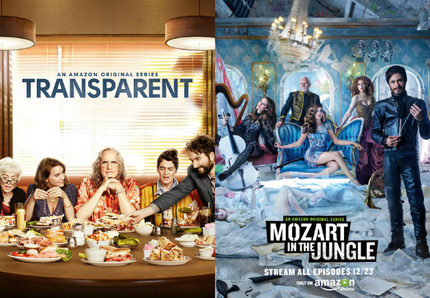 On the small screen, all one needs to do is point to HBO's True Detective, a show that dissolved into frustrating nothingness during its second season. Divorced from Cary Fukunaga, who directed all eight episodes of the first season to great success, creator and writer Nic Pizzolatto ably demonstrated the folly of not replacing Fukunaga with a collaborator at, or somewhat near, his level of accomplishment.

For me, Transparent remains a taste that I've not yet acquired. It revolves around a family whose company I find it hard to enjoy, which has more to do with my own view of people who are generally sour and entitled. What makes the show fascinating to watch is the variety of sexual orientations and gender identities that are explored.

Creator Jill Soloway, a veteran writer/producer (Six Feet Under, United States of Tara), set up the first season to focus on Maura (Jeffrey Tambor) and her decision to come out as a woman to her three adult children, Sarah (Amy Landecker), Josh (Jay Duplass) and Ali (Gaby Hoffman). Obviously, there were plenty of ramifications to work through, which continue to reverberate in Season 2.

Throughout the season, Sarah, Josh and Ali struggle with their relationships, as well as ghosts from the past. As much as they act like children, they're all well into adulthood and are confronting the need to take responsibility for their own lives, even if they don't realize or acknowledge that. Much of the time, they are assigning blame to other people and dodging the implications of their own faults.

Of course, it's easy enough to see where their inclinations come from. Maura and ex-wife Shelly (Judith Light) are nearly entirely devoted to their own emotional needs. Oh, they're still attentive when their children come calling, but their priorities have changed, at least as far as Maura is concerned. She is still working out how she fits into the community at large, and is not willing to accept some of the new restrictions that she experiences. (This is expertly tackled in the penultimate episode.)

As I mentioned, this is a show that's hard for me to enjoy, but it's easy to respect and value. Performed by its main and guest cast with empathy, anger, and self-assurance, Transparent goes far beyond surface appearances to report on what it means to be different in modern society, at least if you're living in Los Angeles with a fair amount of bank.

Mozart in the Jungle, on the other hand, is very much about surface appearances. Set in fashionably downtrodden yet improbably large apartments and extravagantly furnished homes, the employees of the New York Symphony are well-heeled yet always unhappy about something or other.

The first season detailed the entrance of young oboist Hailey (Lola Kirke) and fairly young conductor Rodrigo (Gael Garcia Bernal) into this rarefied world, Rodrigo at the top and Hailey at the bottom, status-wise. The second season finds them both a bit more stable in their respective positions, although Rodrigo continues to ruffle corporate feathers by not sucking up to major corporate donors, and Hailey struggles to pursue her musical dreams, despite Rodrigo still treating her like the personal assistant she became during the first season.

Meanwhile, board member Gloria (Bernadette Peters) continues to protect Rodrigo as best she can, and tentatively revisits her dormant singing career. (It's wonderful to hear Peters singing.) Orchestra leader Cynthia (Saffron Burrows) tries to keep the musicians united as they contemplate a strike, which doesn't keep her from being tempted by the hard-nosed negotiator she hires, the divine Gretchen Mol. And ousted conductor Thomas (Malcom McDowell) struggles to start a new career as a composer, and in the process finds himself warming up to Rodrigo, his upstart replacement.

The show is pretty and pleasant and filled with attractive people -- the musicians who are less physically attractive have sly, comic personalities -- and it's very easy to binge-watch. (I especially enjoyed the episodes in which Rodrigo visited his native Mexico.)

Yet the show never really feels essential. Executive producers Roman Coppola, Jason Schwartzman and Paul Weitz directed six of the 10 episodes between them, and the individual episodes are often witty and beguiling. But taken altogether, the show resembles good-quality butter, melting in the memory as a lovely additive.

That's not entirely a bad thing -- I like good butter! -- so perhaps it's best to enjoy Mozart in the Jungle for what it is, for as long as it lasts.

Both shows are available via the Amazon Prime streaming service. To watch Transparent, start here. For Mozart in the Jungle go right here.