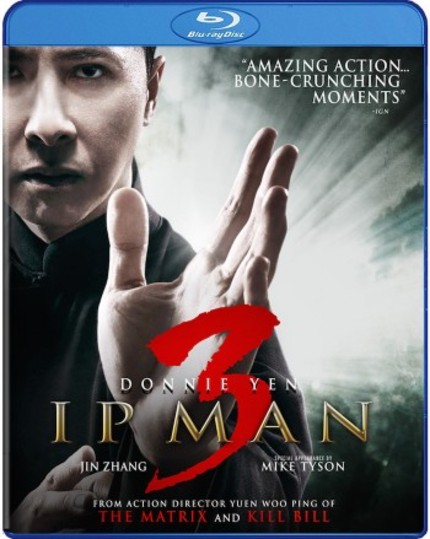 To celebrate the release of the third film in Wilson Yip and Donnie Yen's Ip Man trilogy we've partnered up with Well Go USA to offer you guys the chance to win one of three Blu-rays of Ip Man 3! I know you've probably read plenty about both, but here is the synopsis from Well Go:

Igniting the screen in the role that made him an icon, Donnie Yen (Ip Man 1 & 2, Crouching Tiger, Hidden Dragon 2) returns to the blockbuster martial arts series as Ip Man, the real-life Wing Chun grandmaster who mentored Bruce Lee.
When a ruthless real estate developer (Mike Tyson) and his team of brutal gangsters make a play to take over the city, Master Ip is forced to take a stand against the crooks, thugs, gunmen, and another rival Wing Chun master (Jin Zhang) to protect his students, his city, and his own family.
Fists will fly ​as some of the most incredible fight scenes ever filmed, choreographed by the legendary Yuen Woo Ping (The Matrix, Kill Bill)​, come to life in this genre classic.

But that's not all, we've also got two DVDs of Chen Leste's The Great Hypnotist, starring the legendary Karen Mok! This was one I had not heard about, but I'm willing to watch Karen Mok do just about anything, here's what Well Go has to say about The Great Hypnotist:

Ren (Karen Mok, Shaolin Soccer) sees dead people, and it’s driving her mad. She’s also demonstrating psychic abilities, but psychiatrist Xu Ruining (Zheng Xu, LOST IN THAILAND) thinks it’s a hoax, and his radical new therapy could uncover the truth – through experimental hypnosis.
Exploring the mind can be dangerous. If Ren’s hiding a secret, neither of them are safe. But if her powers are real, the truth might even be deadly.
From the award-winning director of Eternal Summer and The Heirloom comes an expedition through the uncharted corners of the human psyche – with an alarming twist.
If you're interested in being entered in the giveaway, just send an e-mail to josh [at] ScreenAnarchy [dot] net with your name, a US address, and the name of the film you're interested in and I'll draw winners next Wednesday, April 27. Good luck!
Tweet Post Submit