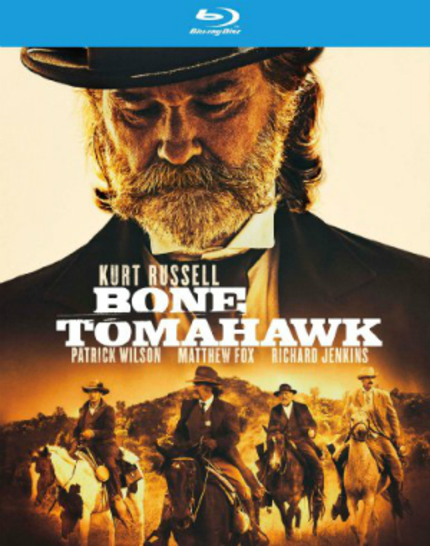 Headlining Blu-ray releases in North America this week, Kurt Russell stars in the sneaky Bone Tomahawk, which looks very much like a Western until it reveals its full palette of colors. Our founder and editor Todd Brown wrote: "Though certainly not without its flaws, Bone Tomahawk very much succeeds in demonstrating the unique voice of its massively talented creator," namely, S Craig Zahler.

Less surprising is the large-scale action in Dragon Blade, teaming Jackie Chan with John Cusack and Adrien Brody; our reviewer Loic Valcechini wrote that it "might offer thrilling fights and beautiful shots - thanks to Tony Cheung's photography and the marvelous scenery - but over-emphasised sentimentalism eventually becomes nauseous." (Note that this one actually released last week.)

The newest attempt at a game to screen adaptation, Hitman: Agent 47 "only runs 96 minutes, which is certainly to its advantage," I wrote in my review. "At its best, it's a Saturday matinee time-waster. At its worst, it's an endless video game that is only of interest to hardcore video game fanatics. Enjoy!"

What about a new variation on a fairy tale? "A film with great ambitions, despite it not always being apparent exactly what those ambitions might be, Pan proves much more than the sum of its parts," concluded our man in Hong Kong, James Marsh. (This is another one of last week's releases.)

Fans of Robert Redford, take note: "As A Walk in the Woods plays out, it's very tempting to make mental comparisons with last year's Wild, a more high-minded, grueling, and emotionally satisfying experience," according to yours truly. "But then Redford smiles, or makes a joke, and the years lift off his face, and all is right with the world, at least until the credits roll."

Links to full reviews can be found below. More releases are listed at DVD Talk or at your favorite online retailer.

More about A Walk in the Woods