Review: A WALK IN THE WOODS, Robert Redford Smiles And All Is Right With The World 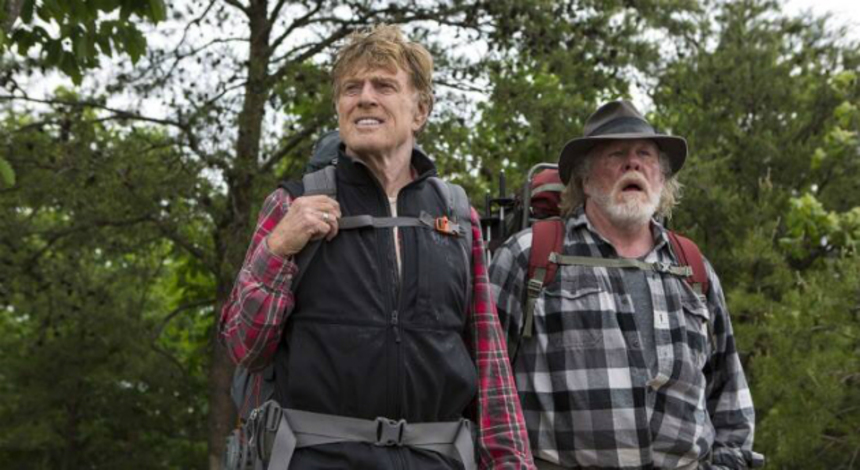 In the altogether pleasant A Walk in the Woods, Robert Redford smiles and cracks wise as he hasn't done on screen for many years. It's a marvelous, if wrinkly, sight to behold.

The movie, an adaptation of Bill Bryson's 1998 bestselling memoir, is loose and jocular and lighter than air. Bryson (Redford) is a well-recognized author who decides one day to hike the Appalachian Trail -- a hiking trail in the Eastern United States that runs some 2,000 miles (3,500 kilometers) -- without really knowing why. His wife (Emma Thompson) insists that he not travel alone, and so, after many turn-downs, his old friend Stephen Katz (Nick Nolte) volunteers to accompany him.

Katz arrives at Bryson's home in New Hampshire, overweight and out-of-shape. He's a grouchy but friendly fellow who traveled to Europe with Bryson when both were young men, not the best of friends but tolerant companions. A similar chemistry emerges after they fly south to Georgia and begin their hike. Although Bryson is in better shape, they are both older men and the hilly terrain tasks their physical abilities. While their friendship is put to the test by various obstacles, including an extremely talkative and self-confident hiker named Mary Ellen (Kristen Schaal), the journey allows them to rekindle their youthful connection and reflect upon the past, the present, the natural beauty that surrounds them, and the vagaries of life.

The lighthearted tone of the movie is established early, as Bryson endures an appearance on a television show to promote his latest collection of books, spends quality time with his wife at a funeral, and then mulls over his next adventure. It feels like adult sitcom territory -- joke, wisecrack, double take, repeat -- and immediately lowers expectations. For a movie that's been in the planning stages for a decade or so, that's not necessarily surprising. Redford at one point envisioned teaming again with Paul Newman, and the project passed through a number of creative hands before ending up with director Ken Kwapis, whose resume is filled with episodic television and movies that easily fade from memory. The script, however, credited to Rick Kerb and Bill Holderman, is sufficiently witty, and Redford and Nolte make for a good comic pairing.

Redford, who turned 79 this year, and Nolte, who is 74, are both about 30 years older than their real-life equivalents at the time the real-life story took place. They look quite good, as actors should, but their age means that the movie employs a fair amount of work by stand-ins and stunt people. For a movie that occasionally showcases some stunning scenes of beauty, it spends even more time showing Bryson and Katz stumbling through the woods.

That's not all a bad thing. Redford directed Nolte in 2012's The Company You Keep, and it's evident on screen that the two men enjoy a degree of comfort, a shared history of riding the ups and downs of careers in the entertainment business, one perhaps more successful than the other. Their personal relationship, whatever it may be, bleeds into the movie, which is strengthened by that bond.

As A Walk in the Woods plays out, it's very tempting to make mental comparisons with last year's Wild, a more high-minded, grueling, and emotionally satisfying experience. But then Redford smiles, or makes a joke, and the years lift off his face, and all is right with the world, at least until the credits roll.

The film opens in theaters throughout North America on Wednesday, September 2.

Do you feel this content is inappropriate or infringes upon your rights? Click here to report it, or see our DMCA policy.
Bill BrysonKen KwapisNick NolteRobert Redford

More about A Walk in the Woods