Review: DRAGON BLADE, Thrilling Fights And Beautiful Shots, Yet Sentimental To A Fault 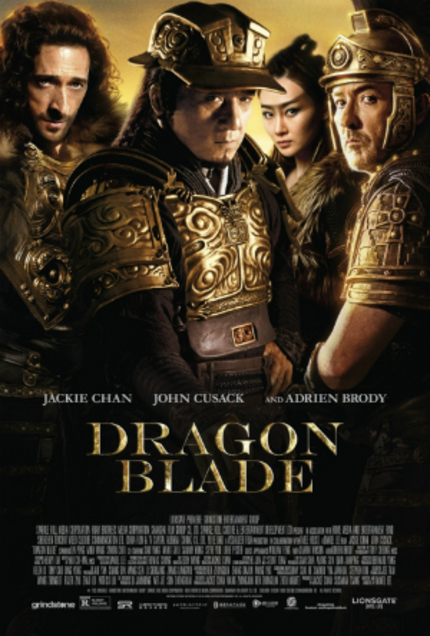 Daniel Lee's war drama suffers from too much naivety that cannot be counterbalanced by its technical qualities.

Grossing more than $50 million only a few days after its release in local theaters, the Chinese blockbuster revolves around the "true" story of Roman and Chinese armies whose paths cross on the Silk Road during the Han dynasty. Although the encounter between Huo An (Jackie Chan) and Lucius (John Cusack) starts off on the wrong foot, both protagonists soon join forces to fight Tiberius (Adrien Brody) and his malicious plans, all the while trying to restore peace in the region.

As I have not seen the Chinese theatrical cut, I wouldn't be able to make comparisons with the international version that screened [here]. What I did notice, however, was that the prologue mentioned here and there was totally missing. Dragon Blade opens with a thundering montage that encapsulates the coming issues that the film will soon depict and quickly offers a nice action scene between Huo An and various characters.

Maybe because of the missing prologue, Lee's film contains some clumsy editing transitions, as it relies too strongly on fades to black in order to jump from one place to another. Of course, it is the very primary usage of such a device but in Dragon Blade it leads to repeating certain decisive elements (Lucius' escape) while other scenes end abruptly and lack narrative smoothness, as if some parts were removed to cut to the chase.

Soon, the cultural clash introduces some light sequences that allow the bromance between the protagonists to blossom. Although Huo An's moral values guide the film, there are fortunately no abusive differences in the treatment of the Roman and Chinese armies. Each of them shows their own assets that will eventually help during the final sequence, where togetherness and unity end up being decisive values.

Not so surprisingly, the only Roman feature that truly moves Huo An and his Chinese fellows is their devotion to their homeland, when the Roman troops start singing a hymn in Latin. After all, it seems that lyrical nationalism is one of the world's only cross-cultural feelings, which feels weird when contrasted to the naive anti-war statement delivered by the film - and by Chan, whose actor's persona somehow transcends the fictitious dimension to issue this pushy and ambassadorial message.

With its massive budget and colossal scale, Dragon Blade expands its cast to include international actors. While John Cusack manages to deliver a strong performance, Adrien Brody on the other hand is hardly convincing in his hateful character who spends most of his screen time frowning and shouting. The film also contains its quota of musical celebrities, with Korean boy-bander Choi Si-won as Huo An's fellow and former French pop singer Lorie as the Persian Queen, both of whom are hardly seen.

Where the film proves to be the most satisfying is in its technical qualities. Lee is fortunately no newbie and although he used quick editing throughout most of his career - it was even his trademark in his very first film (What Price Survival) - he delivers steady and rather long shots that enhance the action choreography, provided by Chan, who as always does an amazing job, despite his advanced age.

In the end, Dragon Blade might offer thrilling fights and beautiful shots - thanks to Tony Cheung's photography and the marvelous scenery - but over-emphasised sentimentalism eventually becomes nauseous. The uneven performances from the international cast added to the constant highlighting of the film's statements, bringing the audience to a point of separation where it's hard to keep watching without feeling derisive about it. While Lee doesn't reach the epic scale he was aiming for, Dragon Blade isn't the catastrophe that one could have feared and contains enough satisfying elements to maintain a high curiosity regarding future Chinese blockbuster productions.

Review originally published in slight different form during the Udine Far East Film Festival in May 2015. The film opens in select theaters in the U.S. via Lionsgate Premiere on Friday, September 4.

Do you feel this content is inappropriate or infringes upon your rights? Click here to report it, or see our DMCA policy.
Adrien BrodyChinaDaniel LeeJackie ChanJohn CusackSi Won ChoiActionAdventureDrama