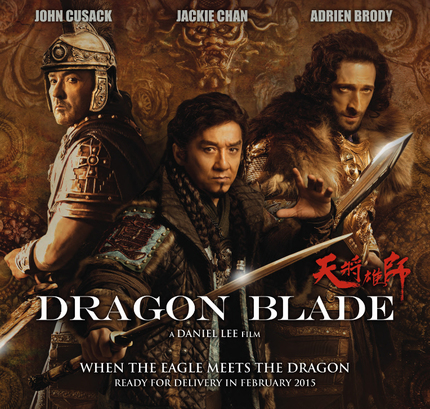 Here's the thing about the three leads of upcoming period set martial arts film Dragon Blade: Jackie Chan doesn't give a shit about his English language work, hasn't for a very long time, and doesn't even bother to hide this fact in interviews. Why should he? Mainland China alone makes him one of the world's biggest stars which means he can view the English stuff as a lucrative sideline without any concern for actual quality. John Cusack and Adrien Brody, however? They haven't been doing so hot lately and they are - for lack of a better term - very much violating the age old wisdom that you shouldn't shit where you eat with this one.

Daniel Lee directs the upcoming big budget - a reported 65 mil - spectacle starring Brody and Cusack as Roman soldiers somehow lost in China. Whoops! Sorry about that, Rome! The trailer for this one has arrived and it is every bit as gloriously stupid as you might hope for. Good lord, I would love to have been in the room when someone decided that putting swords in Cusack and Brody's hands was actually a good idea ...

Do you feel this content is inappropriate or infringes upon your rights? Click here to report it, or see our DMCA policy.
Adrien BrodyDaniel Leedragon bladeJackie ChanJohn CusacktrailerSi Won ChoiActionAdventureDrama