Review: PAN, Far From The Disaster You Might Want It To Be 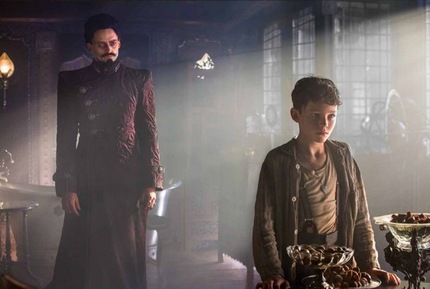 Do you feel this content is inappropriate or infringes upon your rights? Click here to report it, or see our DMCA policy.
Garrett HedlundHugh JackmanJoe WrightLevi MillerPanPeter PanRooney Mara

Critics have a hard on for hating on live action Peter pan adaptations.
They hated hook.
They hated Peter pan.
They hated this.
I admit they're all uneven but none deserve the vitriol they receive

"not that anybody asked"? Seriously? I'm not a fan of origin stories in this context either - but for goodness sake, talk about being critical just for the sake of it. Of course, many, many people asked. Or does that not really matter?

Umm, no. Critical thinking appears to be an issue for you.

Based on what? This one review, or everything I've ever written? Just curious as your comment seems somewhat throwaway.

Actually, the 2003 Peter Pan was widely praised, and remains a well-regarded film and adaptation.

And you're a Moderator? Nice.

Us mods, we can talk back if we want and participate in discussions. Which we often do.

We're not just policemen, or trying to calm everything down all the time. That only happens when discussions get out of hand, and turn into shouting matches, or (otherwise) get abusive.

In this case, I think James' wee bit of sarcasm was justified.

You know, even though I respect your work as a film critic, I have to agree with cinesimonj in that the "not that anybody asked" never serves any purpose at all. I find it often drags down the credibility of any review, because
1. it shows a kind of initial passive-aggressive hostility towards the film that does not bode well for the fairness of the review (and I do think a review should try to be fair),
and 2. it's often either not true or irrelevant, because a film doesn't have to be "asked for" to justify its existence, and because often, a particular concept has much more fans than we might suspect.
Anyway, not trying to teach you anything about your job or be critical for the sake of it, sincerely.

Hey no problem at all. If you disagree with something I've written then by all means express yourself. I still believe that most "long after the fact" origin stories, such as those in the films cited, are quite unnecessary, and serve to drain the mystery from a character far more than add to their appeal. One thing I would just like to reiterate is that I did in fact like PAN, unnecessary origin story and all, and considering how poorly it appears to be performing, would urge more of you to check it out.