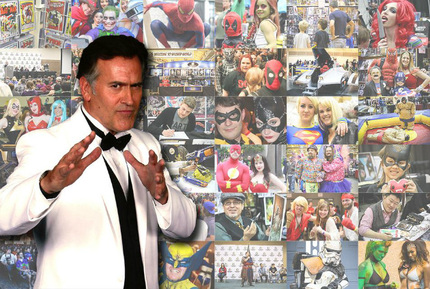 Residents of Chicagoland, rejoice! (Also, tourists who can make plans to travel there).

The program for the second annual Bruce Campbell Horror Film Festival presented by Wizard World has been announced, and it is filled with "vampires, psychotic breakdowns, cannibals, killer dogs, contagious diseases, mummies, bad decisions, and easily the most evil half man, half bunny rabbit of all time," according to festival director Josh Goldbloom.

Of course, Goldbloom might not be the most objective source, but a quick look at the films programmed by The Awesome Fest is mighty impressive. Opening night will see the local debut of Tales of Halloween, an anthology film featuring shorts by the likes of Neil Marshall, Darren Lynn Bousman, and Lucky McKee, while the closing night highlight will be He Never Died, directed by Jason Krawczyk and starring Henry Rollins, which has already gained good word of mouth.

As far as special events are concerned, Tom Holland will attend a 30th anniversary screening of Fright Night (i.e. the original, good one), Eli Roth will introduce a 35mm screening of Cannibal Holocaut -- which is preceded by a "cannibal brunch" -- and Bruce Campbell will participate in a discussion after a screening of Don Coscarelli's absolutely terrific Bubba Ho-Tep.

The festival runs from August 20-23. Here is more information, provided by the festival:

Films will screen at the Muvico Rosemont 18, 9701 Bryn Mawr Ave., mere blocks from the Wizard World convention hall. Screenings are free for Wizard World badge-holders (space permitting), and a limited number of festival badges and single tickets are available for fans who are not registered for Wizard World.

Festival badges are on sale for $100, and single screening tickets are available for $12. To purchase badges or tickets and view Festival schedule updates, visit the official site.

Bubba Ho-Tep (2002)
Followed by a Q&A with lead actor Bruce Campbell!
Elvis and JFK, both alive and in nursing homes, fight for the souls of their fellow residents as they battle an ancient Egyptian Mummy.
Cast: Bruce Campbell, Ossie Davis, Heidi Marnhout and Bob Ivy
Dir: Don Coscarelli

Bunny the Killer Thing
U.S Premiere
A group of Finnish and British people get stuck in a cabin when a creature -- which is a half human & half rabbit -- attacks them. The creature is Bunny the Killer Thing, and it is after anything that resembles female genitalia. Yes, really. Based on the 2011 short film of the same name.
Cast: Gareth Lawrence, Veera W. Vilo, Roope Olenius and Enni Ojutkangas
Dir: Joonas Makkonen

Contracted: Phase 2
North American Premiere - Cast & Crew in attendance!
Picking up directly where the creepy indie hit Contracted left off, Phase II follows Riley, one of the last people to come in contact with the ill-fated Samantha, as he scrambles to track down those responsible for the outbreak before the highly contagious disease not only consumes his body, but possibly the world as we know it.
Cast: Matt Mercer, Alice Macdonald, Stacy Burcham, Laurel Vail, Anne Lore and Morgan Peter Brown
Dir: Josh Forbes

Fright Night (1985)
Followed by a Q&A with writer / director Tom Holland!
A teenage boy is convinced that his new neighbor is a bloodthirsty vampire, but nobody will believe him -- until he enlists the assistance of a fussy old actor who used to kill the creatures all the time. In movies, that is.
Cast: William Ragsdale, Chris Sarandon, Amanda Bearse, Stephen Geoffreys and Roddy McDowall
Dir: Tom Holland

He Never Died
Chicago Premiere - Filmmakers in attendance!
Jack, a social outcast, is thrust out of his comfort zone when the outside world bangs on his door and he can't contain his violent past. A masterful combination of film noir, crime thriller, character study, and horror story.
Cast: Henry Rollins, Booboo Stewart, Jordan Todosey and Steven Ogg
Dir: Jason Krawczyk

Hellions
Chicago Premiere
A troubled teenager must survive a Halloween night from Hell when malevolent trick-or-treaters come knocking at her door. And refuse to go away. From the director of festival favorite Pontypool.
Cast: Chloe Rose, Rossif Sutherland, Rachel Wilson and Robert Patrick
Dir: Bruce McDonald

Nina Forever
Chicago Premiere
After his girlfriend Nina dies in a car crash, Rob unsuccessfully attempts suicide. As he begins to overcome his grief, he falls in love with a coworker, Holly. Their relationship is complicated when Nina, unable to find rest in the afterlife, comes back to life to sarcastically torment them whenever they have sex.
Cast: Abigail Hardingham, Cian Barry, David Troughton and Fiona O'Shaughnessey
Dir: Ben Blaine & Chris Blaine

The Pack
North American Premiere
A farmer and his family must fight for survival after a ferocious pack of wild dogs infiltrates their isolated farmhouse. Through a series of frightening and bloody encounters they are forced into survival mode to make it through the night. An exercise in suspense, in the same vein as OPEN WATER & BACKCOUNTRY, this grisly Australian horror/thriller packs a ton of bite.
Cast: Anna Lise Phillips, Jack Campbell, Hamish Phillips and Katie Moore
Dir: Nick Robertson

Some Kind of Hate
Chicago Premiere
A bullied teenager is sent to a reform school where he accidentally summons the spirit of a girl, herself a victim of bullying, who takes vengeance on his tormentors.
Cast: Grace Phipps, Lexi Atkins, Ronen Rubenstein, Spencer Breslin and Noah Segan
Dir: Adam Egypt Mortimer

Sun Choke
Chicago Premiere
Recovering from a violent psychotic break, Janie is just trying to get well under the care of her lifelong nanny and caretaker. She begins to veer off the road to recovery when she develops an obsession with a young woman to whom she feels an inexplicable yet profound connection.
Cast: Sara Malakul Lane, Sarah Hogan, Evan Jones and Barbara Crampton
Dir: Ben Cresciman