Destroy All Monsters: The Problem With The TOMORROWLAND Thesis 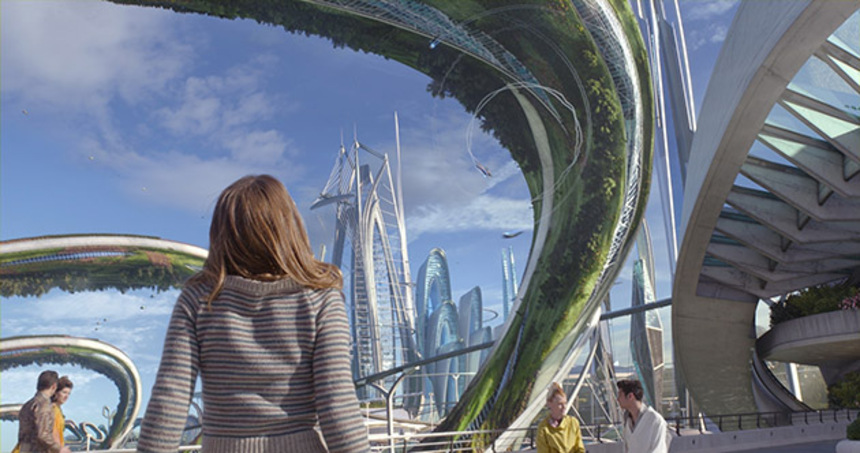 I enjoyed Tomorrowland. There was a joy about the way Brad Bird shot the film that reminded me of early Spielberg, and if the whole thing ends up turning on the audience's willingness to believe that George Clooney has harboured a crush (and therefore a grudge) on a ninja robot in the body of a 12-year-old girl for his entire adult life, well, Raffey Cassidy was excellent as the robot.

The film exists somewhere on the salt flats between "earnest" and "preachy," and has been receiving fire for it. There's a unique pop cultural thesis at the center of it all: Tomorrowland proposes that our elaborate fixation upon doomsday scenarios in our media - Fury Road last week andSan Andreas next, as many critics have pointed out - has become a kind of self-fulfilling prophecy, robbing the mainstream of hope in, wonder at, and responsibility for "the future."

It's not a bad proposal, even if by its very nature it has a smug, scolding air to it: "that thing you like is actually bad, don't you know that?!," the same whiff of heightened disdain that I wordlessly level at the pack of lifetime smokers who huddle around the doors of my office building as though they have no choice in the matter of poisoning their futures with ash.

Tomorrowland plays as though someone decided to drag the implied subtext of Star Trek out of the engine room and make it bold-face TEXT. This is doubly ironic, given that screenwriter Damon Lindelof's last big-screen effort was the script for Star Trek Into Darkness, the first Star Trek property in history that made the human future seem like a uniformly terrible place to live, and one which we should avoid at all costs.

I've long nursed a belief that idealistic utopianism of the kind that Star Trek once represented (oh, nearly fifty years ago now) and Tomorrowland proudly champions are simply an ill fit for this day and age. We seem to have moved into more complex (or, perhaps, myopic) readings of the relationship between the now and the what-might-happen.

That Tomorrowland contains an in-text rejoinder to this idea doesn't save it for me. On the whole, I do believe in the kind of social optimism that Tomorrowland insists isn't just a good thing but vital. My problem with the Tomorrowland thesis is with its other half: the demonization of our fascination with the apocalypse.

Let's take Mad Max: Fury Road as our example, because let's face it, it's the best one. I've seen the film four times in the past week. I'm going through some shit right now, and that film is what I need: a brightly coloured race through humanity's wasteland, and a small band of near-mute heroes grunting their way through their salvation.

One of the most interesting, if pathologically strange, responses to the film came on the weekend from the Tumblr user who claims to be George Lazenby (but isn't that George Lazenby). If you're not familiar with his particular breed of writing and twittering, it's worth looking at.

In his Fury Road piece, non-Lazenby proposes what amounts to an anti-thesis to the Tomorrowland idea without mentioning the latter film at all. He creates a premise around the kinds of things human beings need, whether demonstrable (vitamins and the like) or assumed (dreams and dreaming).

He goes on to position cinema as a third, vital ingredient - a waking communal dream that basically creates what we think of as "humanity" itself.

That's a big proposition, and I admire the scope. He's not the first person - far from it - to make the connection between watching movies and the dream state, but he drew a lot of useful connections that have enhanced the argument for me substantially, just in the few days since I've read it.

Back to Tomorrowland. Yes, I do believe that movies - all of pop culture, really - are our society's waking dream state. But no, I categorically reject the idea that the content of that dream state is somehow creating a self-fulfilling prophecy of doom and mutual annihilation.

I don't know about your dreams, but I know about mine. I never dream about how awesome the next twenty years of my life are going to be, or what it will take to get there. I dream about trivial things pushed into the realm of the bizarre: going to see Roar last night, except the person I'm seeing it with won't stop staring at my face throughout the screening. Attending back-to-back meetings at the office, except no one will stop eating cake and talking about pregnancy. Escaping from the Temple of Doom, except... well, actually, I guess that one doesn't fall under "trivial things."

My point is, we've yet to solve how dreams manifest the things they show us, except that it seems to me that they are a means for our sleeping brains to articulate anxieties and work through their shit, as vital to our continued sanity as sunshine and babies.

I don't think the apocalypse in our popular culture is pessimism. I don't think it's an ism at all. I think it's just a means to articulate anxieties: some very real ones about the potential for the end of the world; some very metaphorical ones about how the pieces of our society relate to one another and what that means for us as individuals.

Some wholly unconnected ones, like: I'm going through some shit right now and I really feel better after I watch the War Rig get through the canyon.

The most wonderful thing about watching Mad Max: Fury Road take hold in the popular consciousness over the course of the past couple of weeks? For me, it was watching the flowering of a zillion new memes: both the gifset memes as we generally use the term these days, and in the larger sense of new idea-units exploding into our thoughts, our language, the way we express ourselves to one another.

It was as though suddenly everyone was talking in a new, exciting dialect: finding the corners, enriching the meaning, doubling back on ideas and themes and imagery that will be part of the building blocks of our discourse for years to come.

That's not pessimism or an articulation of a societal death wish. That's the exact opposite. That's a rich culture dreaming. Cinema is one of our shared dreamspaces, and we need that dream to go where it will.

Destroy All Monsters is a weekly column on Hollywood and pop culture. Matt Brown is the co-host of the Mamo! and Super Zero podcasts, and can be found on twitter.