Review: TOMORROWLAND, Yearning For The Past, Dripping With Disney Spirit 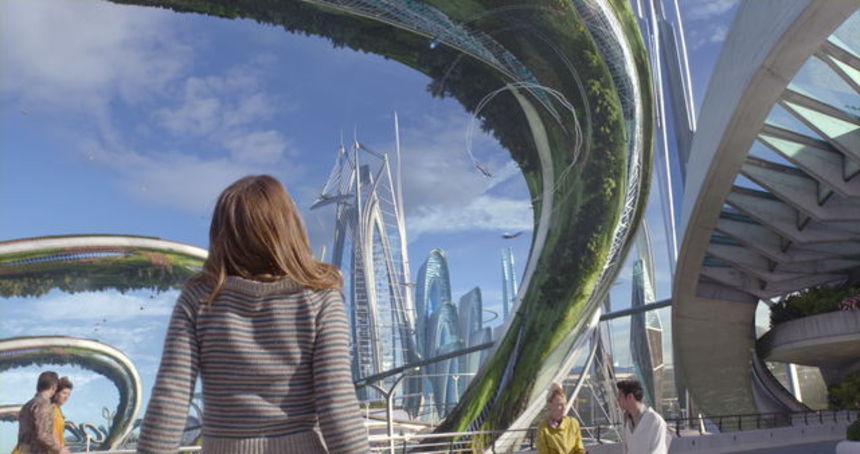 Four years after the greatly entertaining Mission Impossible: Ghost Protocol, Brad Bird tackles the live action dimension for a second time with Tomorrowland, a massive sci-fi production intended for the whole family. Despite a rather enjoyable first part and Bird's undeniable visual talent, the film unfortunately sinks into over-cheesiness and sacrifices its ending for some damaging Disney propaganda, which is more reminiscent of what the company used to do in the past rather than of the better and riskier productions (John Carter, The Lone Ranger) that they've been doing recently.

Although the original story is penned by Jeff Jensen, Damon Lindelhof and Bird himself, Tomorrowland got its inspiration from the homonymous themed land of the Disney parks that were conceived in the 1950s and 1960s. Bird teams up again with Disney after their fruitful collaboration on The Incredibles and Ratatouille to narrate this bigger than life story in which Casey, a clever and optimistic teen, discovers a futuristic city thanks to a pin showing advanced technology. She will soon need to join hands with Frank, an ex-boy-genius, in order to prevent the end of the world.

From this not so down-to-earth premise, the most entertaining parts take place in the first hour of the film. Relying on The Matrix-like narratives - meaning it involves a chosen one, a hidden universe and a few rebels fighting against an oppressive force - the story surely doesn't surprise much and falls on very recognizable patterns. This said, Bird manages to bring sufficient interesting elements to give his film a strong pace: from the moment Casey gets the pin until she meets Frank, Tomorrowland continuously offers surprising action scenes and regular funny bits that keep the viewers entertained.

Then, the film's qualities slowly but surely vanish as it showcases a series of silly ideas. The chain of events getting Casey and Frank to Tomorrowland, for instance, shows some fastidious nonsense. The biggest disappointed yet proves to be the sequences in the futuristic cosmopolis, as Bird makes no real kinetic nor thrilling use of it and rather falls for uninteresting and over-talkative scenes, as well as for an endless tear-jerking climax. While most of the actors do a good job, Hugh Laurie is the only one who doesn't fit into the universe, goofily aligning his dialogues and trying to act as the prototypical Disney bad guy.

The finale contains naivety to such a high degree that it's hard to overlook it, especially as the film sacrifices its climax to such obvious merchandising - after all, Tomorrowland is a film about Tomorrowland, so there's no expense needed to maximize the profits on the franchise as several themed parks are already built around the world. The conclusive message surely teaches a positive lesson about optimism and creativity, but the final montage with its voice over displays so much ridicule that it's hard to believe they actually went for it. Is some random street guitar player really supposed to represent one of humanity's brightest and most inventive individuals?

This cheesy feel-good sequence also displays some problematic issues as far as the question of diversity is concerned, since most of the chosen people depicted in it are Asian and Afro-American people. Don't get me wrong and don't misread this as a racist claim ; I'm only trying to highlight Disney's urge to fill its ethnic quota. The company so badly needs to show how open-minded, tolerant and peace-loving it is that it ends up shooting itself in the foot, underlining their intentions in an almost coarse way. Casting an Afro-American actress for the role of Casey would have been less obvious than this very polite political correctness - but I guess Disney isn't that open-minded after all.

Not only Tomorrowland spreads cheesy Disney's spirit all over the film, it also reminds the audience that the company is now the copyright holder of the Star Wars franchise. Silly references are made in an early scene when Casey is looking for information about the pin. As she ends up in a collector shop, the owner of the place makes a failed Darth Vader-y entrance, with John William's well-known score suddenly bursting. Even though this joke falls flat, the direct references to Lucas' saga unfortunately don't stop here. Used as a way to butter the audience up, these attempts at humorous shifts never work and rather disrupt with the flow of this action scene, which is otherwise well choreographed and nicely executed.

In the end, a relevant comparison between the trailer of Tomorrowland and the pin found by Casey can be noticed. Both are commercial constructions that are made to lure potential clients to go to see Tomorrowland. Arrived in the city, Casey realizes that the metropolis does have advanced technology but that the government is stuck with old thinkings. Watching the film in the theatre, the audience discovers one of the most recent blockbusters that does comprehend great special effects and high production values but that relies on outdated self-promotional discourses.

The deception unfortunately proves to be bigger for the audience : whereas in the fiction the protagonists manage to restore some kind of balance and eventually offer an optimistic conclusion, the viewers on the other hand leave the screening with the sour feeling that one of Hollywood's most promising directors somehow agreed to sell his artistic convictions to a very formulaic company.

This is why we need, once again, to celebrate George Miller. He might depict a darker conception of the future of mankind, but the one he offers to cinema is infinitely much brighter.