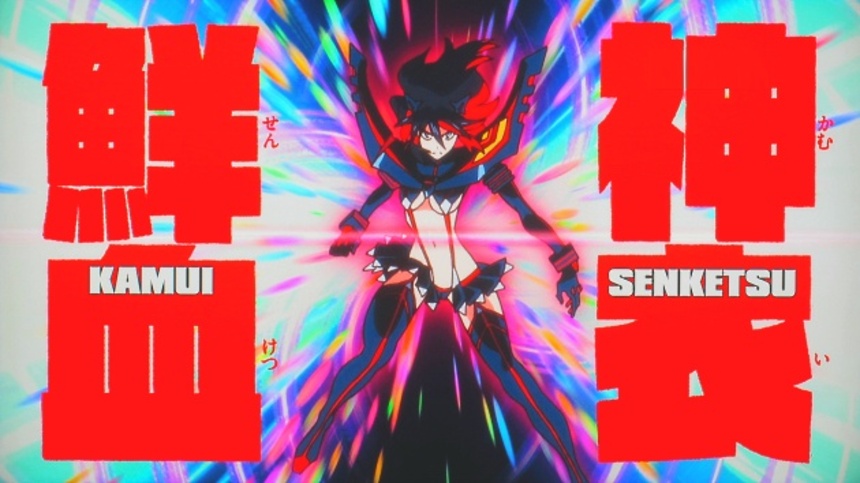 (For those with a sailor-suit fetish and/or a certain sense of humor, Christmas sure has arrived early...)

Confession time: when the first trailer and images of the anime series Kill La Kill appeared on the Internet last year, I thought it was going to be total and utter shite. I'm certainly not against titillation (ahem...), but in the past I have also raised objections about some of the more disturbing tropes in anime (ahem again...).

Yet here I am today, holding in my hands Anime Limited's quite expensive Blu-ray boxset covering (or, rather, un-covering) the first third of the series, and I'm pleased as punch. What happened? Time for a review!

In future-time Japan, the country is ruled by colleges. What job you'll get, what privileges you have, where your family is allowed to live, all depends on how good a student you are. And nowhere is this regime enforced more rigidly than at Honnouji Academy, run by its student council, the members of which wear special school uniforms, granting them superpowers.

But one day a transfer student arrives who messes up the whole system: Ryuki Matoi, who is angry, angry, ANGRY! Her father has been killed, and she has a strong suspicion that Satsuki Kiryuin, the leader of the Honnouji student council, knows who is responsible.

When Ryuki demands answers, she is beaten up and thrown out of the academy. But then she finds Senkutsu, a talking school uniform who, when worn, grants her even greater powers than the student council members. Armed with this garment and half of the scissor blade which killed her father, Ryuki prepares to take on all of Honnouji Academy, prepared to bring it down if necessary...

If there is one particular skill I admire director Imaishi Hiroyuki for, it's that he somehow consistently manages to have his cake AND eat it. Both Kill La Kill and Gurren Lagann are undeniably satires, gleefully spoofing genres and anime tropes. But at the same time they are homages as well, and stand as shining examples of those very same genres! Pleasing the same audience you poke fun at is no easy feat, but Imaishi has clearly figured out how to do it.

In Kill La Kill, it is the "magical schoolgirl" genre which bears the brunt of the attacks. A cute-looking high-school girl discovers she has awesome powers (including a revealing costume transformation) and starts using them for a good cause, only to find out she attracts heaps of trouble for herself and her friends. From there on, the only distinction between series tends to be how silly or naughty things get. And from the onset, Kill La Kill profiles itself as ridiculously silly and ridiculously naughty.

Using the "magical schoolgirl" genre as a starting point to do something special has been done before, and Puella Magi Madoka Magica is a fine example of that. But where that series lured people in with a happy happy twee twee exterior, only to confront them with a VERY dark tale of moral choices and dire consequences, Kill La Kill aims for the gleeful joy of anarchy and righteous revenge-violence.

The Honnouji Academy Student Council is incredibly annoying from the moment you see them, a bunch of over-entitled bullies with delusions of grandeur. Seeing Ryuki Matoi beat the snot out of them is highly enjoyable to say the least. If this was all Kill La Kill had to offer, coupled with copious ecchi fanservice, it would probably already have carved out a profitable niche for itself. But to my surprise, its flashy surface has more to offer as well.

For starters, Ryuki Matoi makes for a very likable protagonist, which is strange as she is depicted as little else than a violent problem child. Still, she is the "straight guy" through which the audience gets to see the world, with all its ridiculousness and endless indignities. Even through the most excessive nudity and sexploitation, she only shows embarrassment and anger, never the "Oooo-er" coyness so often prevalent in anime jail-bait schoolgirl titillation.

And the world has a lot more to show for it than just weird enemies. There is a strong focus on the sailor-suits which form the (in)famous Asian schoolgirl uniforms. Honnouji Academy is funded by a clothing business, even the school building itself seems to be wearing a sailor-suit, and each conspiracy is somehow textile-based. Even the rebellion against the academy calls itself "Nudist Beach", pointing at clothes as the enemy. Uniforms are consistently shown as evil, a facade to hide ugliness behind, masking everything with fake pride. It's telling that Ryuki Matoi's Senketsu outfit may seem like a uniform, but is actually a costume, setting her apart from the rest, and she's all the better for it.

Much has been made of the series' naughty designs, and especially Senketsu in super-powered mode seems to be designed as a challenge to the most daring of cosplayers. Indeed, Ryuki's extremely revealing transformations show sights like a crotch-shot of the costume's string being pulled hard into her buttcrack. It's off-puttingly blunt instead of alluring, as if the makers are yelling at you: "This is what you want? This is what you get!!".

But this is just a part of the same attitude which pervades the entire series. Kill La Kill is so consistently over the top in everything that it can never be taken seriously, from its fanservice, to its action sequences, to the insane family who house Ryuki. That director Imaishi Hiroyuki somehow also manages to bring poignancy, excitement and tension to the table when it's necessary, is nothing short of a marvel.

Kill La Kill kicks ass while it pokes fun at kicking ass and challenges kicking ass, and that in itself kicks ass too. Its hype turns out not being a case of "The Emperor's Clothes..." at all.

Scottish distributor Anime ltd. is releasing Kill La Kill as three boxsets, the first of which was released a few weeks ago, with the second one being provisionally planned for April.

Last week we put up some pictures of the boxset (click here), and in that article I wrote the following:

In a rather bold move, Anime Ltd. releases Kill La Kill a mere seven months after its original Japanese broadcast ended. This means the license is still hot and expensive, and Anime Ltd. has to release it above a certain price point, far above what other distributors in the UK have often dismissed as a non-existing market.

While we can certainly expect cheaper editions in a year or two, three, for now it means the series has to be split in three parts, each being sold for what you regularly would pay for an entire (but older) series.

Therefore, these editions need to bring something extra to the table, so that early adopters who are willing to shell out also have something to pacify their cognitive dissonance with. In short: this Kill La Kill release had better be kick-ass.

So the big question is: did Anime Ltd. manage to make this release worth your while? Audio and video (and subtitles) on the nine episodes are great, as can be expected from a recent anime. Annoyingly, even at this higher price range, the original Japanese dub has still been sabotaged to stereo-only to prevent Japanese fans from importing this edition.

Extras on the disc are not exactly plentiful: you get clean opening and closing credits (and alternate versions of those on the second disc), and that's it. The big pull for fans will be the design book included with this edition, and thankfully it is a great one. A softcover sketchbook with a whopping 188 pages, it contains designs, thumbnails, sketches and storyboards for the opening-and-closing credits, and the episodes of this boxset. There is a lot of great stuff in this book, and, not surprisingly (given the series), a few of the pages get pretty damn lewd.

All in all it makes this edition a pricey one (though on some on-line vendors the charge is already coming down as we speak) aimed straight at fans, but for those it will definitely be a worthy purchase. Bring on the second boxset! 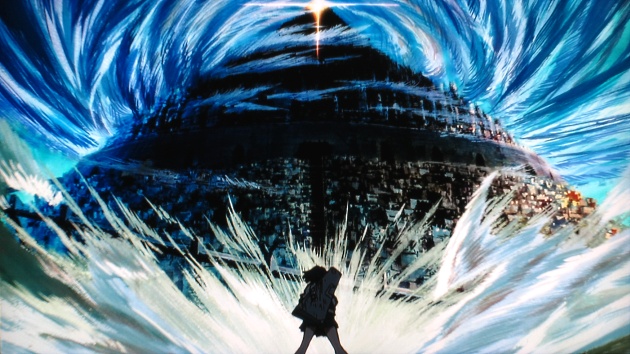