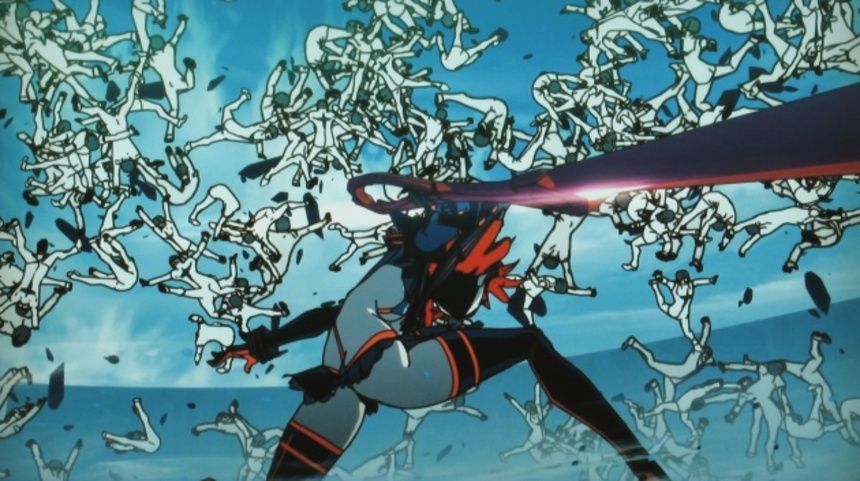 Last December, Scottish distributor Anime Ltd. released their first boxset of Kill La Kill, which was pretty much kick-ass and which I reviewed here. Now, just over half a year later, the third and last boxset has appeared. I refrained from reviewing the second boxset because it was pretty much similar to the first one, and there wouldn't have been much to say other than "it's here" and "I'll try to explain how the story continues without spoiling it".

In fact, I could do the same thing now, but with the series finished some reflections in hindsight can be added. For instance: does Kill La Kill wear out (haha) its welcome, or does it stick the landing? I can safely spoil that one: it sticks the landing. Nails it with a poker, more like. So here is my double-review of boxsets two and three.

At the start of the story, Ryuki Matoi enlisted as a student in Honnouji Academy to find out who killed her father, and her investigation got her into hot water with the school's super-powered Student Council. Thankfully, Ryuki was actually the most super-powered of them all, due to her living school uniform Senketsu.

The first boxset ended as Ryuki participated in a tournament of sorts, taking out ever stronger opponents while gunning for the main prize: a battle with the Student Council's leader Satsuki Kiryuin, who knows exactly what happened to Ryuki's father. A series of drawn out battles with a clear goal, Kill La Kill took its time with Ryuki's opponents, and it was plain to see how the remainder of its 24 episodes would probably be filled.

Except... that's not what happens. This track derails gloriously, and Ryuki suddenly gets a lot more to consider than just her personal quest for revenge...

Director Imaishi Hiroyuki can be considered to be a master in escalation. His Gurren Lagann series started with a guy in a cave trying to tunnel his way to the surface, but quickly went to world war, to genocide, to clunking planets together, to dimension-skipping celestial warfare between entire universes and realities.

Seen from that angle, Kill La Kill is a far more intimate story. It is, however, no less riveting to watch. As bizarre as it gets (and it DOES get bizarre) and as ridiculous as the endless barrage of breasts and buttocks becomes (and it DOES become ridiculous), you cannot help but root and feel for the main characters. At one point in the story Ryuki Matoi seriously doubts her purpose in life, and the lure the enemy holds in front of her is so tempting, that you can't help but understand why she at least nibbles a bit on the offer, rather than just heroically slapping it away. Through all of the exaggerations and caricatures, Ryuki Matoi remains a human character, a heroine with attitude you like. It's the series' biggest accomplishment and its greatest strength.

It needs that strength, because things get even more outrageously silly than in boxset one. This is one of the funniest anime I've ever watched, and the antics of Ryuki's crazy classmate Mako got me howling with laughter several times. The series' notorious fan-service is back in force as well, and still hilariously merged with its clothes-obsessed storyline. In short: I still loved it, and kept loving it right through its grand finale.


On To The Discs:

Boxsets two and three are very similar to boxset one, meaning they are good, carry little in the way of on-disc extras, and have kick-ass books with them. The biggest on-disc extra is the 25th episode, which is a separate epilogue OVA, released months after the series' broadcast ended.

Both boxsets are also quite expensive. People are clamoring for the price to come down, and it's easy to see why: the series was split in three parts, each of them costing what you'd normally pay for an entire series.

But.you do get something for that price: a recent, VERY popular series, with over 500 pages worth of design books attached. No doubt a cheaper Kill La Kill release will come along in a few years. Me, I'm glad I didn't wait that long.

Note that for a limited time, the third boxset will come with a big box, which fits all boxsets. I call it the Kill La Kill Killer Boxset Box, and you can see pictures of it here. Do you feel this content is inappropriate or infringes upon your rights? Click here to report it, or see our DMCA policy.
animeanime Ltd.Ami KoshimizuAya SuzakiToshihiko SekiShin'ichirô MikiAnimationActionComedy