Pretty Packaging: GHOST IN THE SHELL 1.0, And My Seven-Fold Double-Dip... 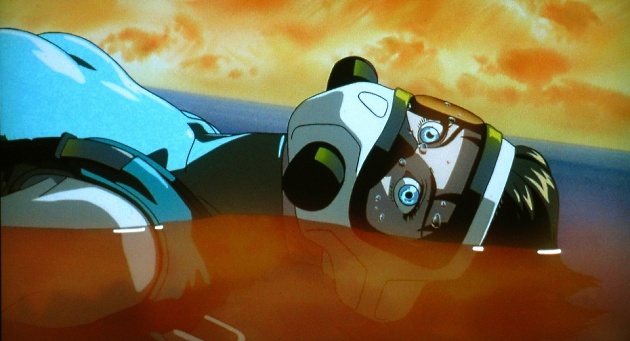 ("I can resist anything except temptation" - Oscar Wilde)

See the image above? It is from Oshii Mamoru's Ghost in the Shell. To be more specific, it's from the original 1995 version. It is not in the revamped cut called "2.0" (where it was replaced with a cgi-generated 3D model), yet it is one of my favorite shots of the whole franchise. And, thanks to Manga UK, you can now check this image out in high definition, as last week they released a Blu-ray of the original "1.0" cut.

Back in Summer 2008, I wrote an article about my love-affair with this film, an infatuation which made me buy it over and over again whenever a better version appeared. I ended that article with: "Guess what one of my first titles will be when I convert to Blu-ray?"

That was then.
This is now... six years later. Time for an update!

When I saw Ghost in the Shell for the first time, I was already late to the party. It was in 2000, at the International Film Festival Rotterdam, and luckily in a very large cinema. The film and its soundtrack blew a fuse in my brain, and I've been uncommonly obsessive about it ever since. I'm talking posters, t-shirts, books, soundtracks, and behaviors perhaps more suited to an 18-year-old than to a 40-year-old.

So here is a gallery of the many versions I now own, old and new. I'm not going to write a review for the film itself (the one by Niels already sums it up nicely), this is just about the different editions.

Have a look. Call me crazy. Feel free to point me to other editions!

But most of all, share, in the comments, your stories about the film you're most obsessed with, and which you own several times over! 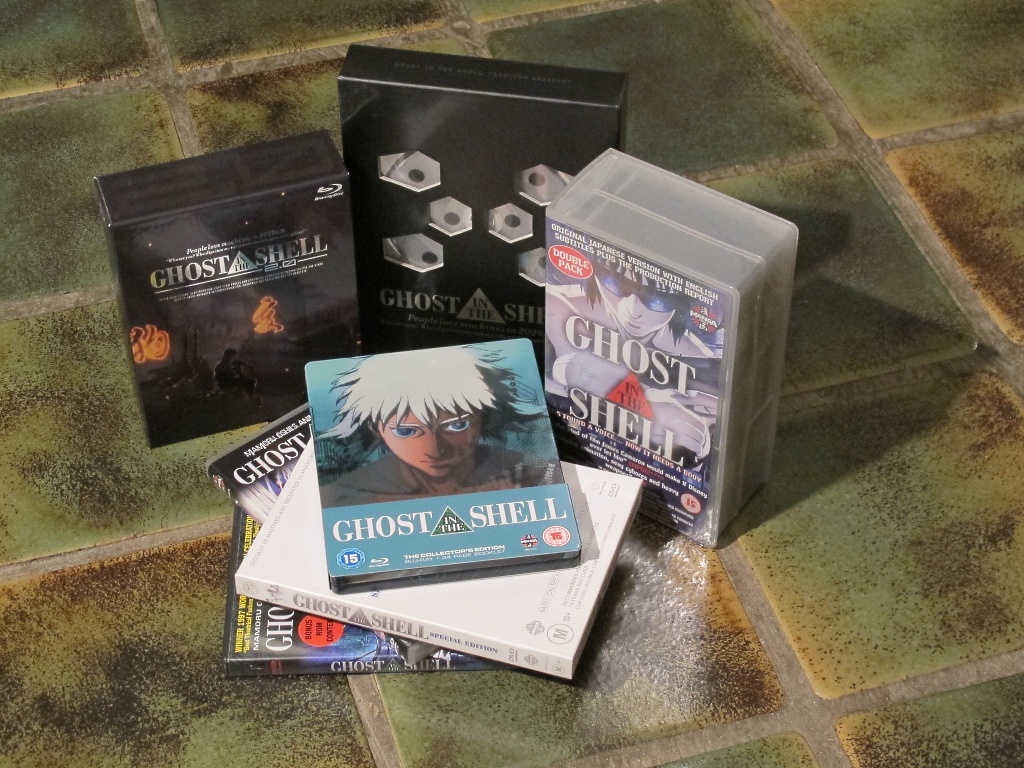 And here they all are, stacked. In this gallery, I'll run through them from old to new. For the old, I'll sometimes copy snippets from my previous article.

For the new, I end with the new Manga UK-release and give a brief opinion on that release (in short: it's good). 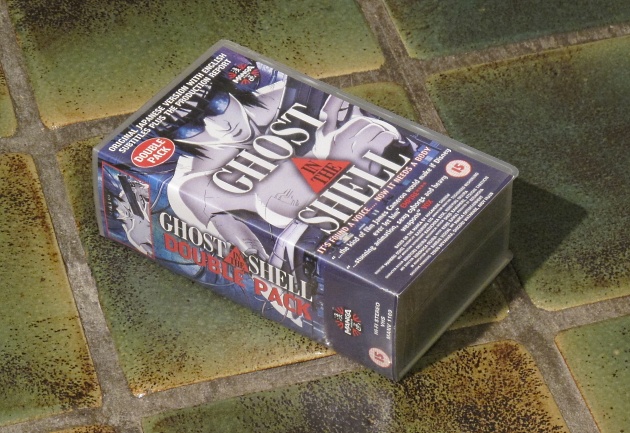 When I saw the film in 2000, it got to me in a big way, not the least because of Kenji Kawai's powerfully haunting score. It bugged me for days afterwards but couldn't find the soundtrack in stores anywhere (I wasn't too internet-savvy in those days...).

But at a videogame-store that actually sold anime as well, suddenly I found this: the Manga UK VHS Double Pack. And it was amazing.

For starters it had the original Japanese soundtrack instead of the English dub I had seen in the cinema. The Japanese track contained lots more information, so much in fact that the English subs had to run in three rows instead of the more usual two! Sound and video quality were quite high, in fact a friendly DJ recorded the soundtrack for me from this VHS-tape, ran some noise-removal filters and burned it on CD. I still have that thing and the quality is surprisingly decent... 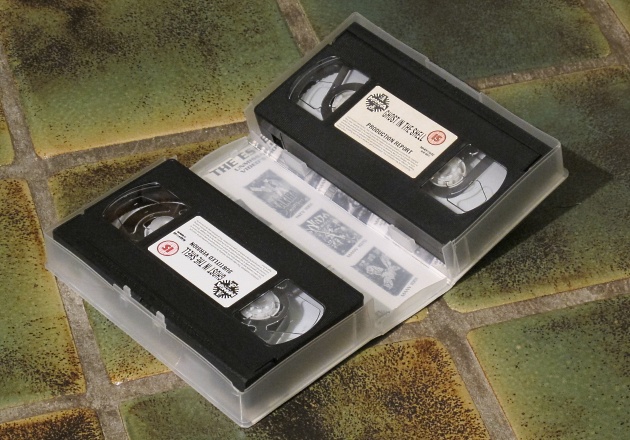 Also it had something special: extras! Mostly unheard of on VHS (extras only started to become a thing when Laserdisc was introduced), this release actually had a separate second tape with a documentary on it. 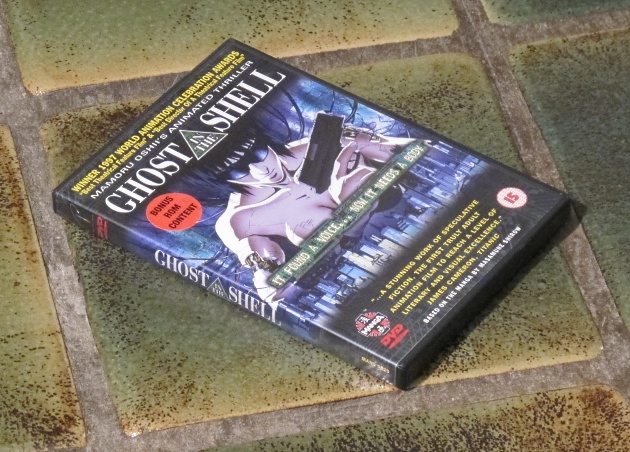 In 2002 I finally had me a desktop with a DVD-player in it and the leap in image quality astounded me. So one of the first disks I bought was the first Manga UK DVD of Ghost in the Shell.

I was in for a rude shock though: crisp visuals, brilliant clear Dolby 2.0 sound in Japanese and even Dolby 5.1 in English... But what a shame both didn't line up. That's right, this disc allowed you the choice between the English and the Japanese dub, but both are a full third of a second off-synch with the visuals. An astounding blunder for what should have been a flagship title...

It didn't even stop there: the disc also featured the documentary of the VHS double pack, but just in Japanese and without subtitles. So if you didn't speak Japanese, well... shame.

There was Bonus ROM content as well, but that was a trailer and mostly snippets from groups performing music festivals (a version of Quicktime was included on the disc as well, to watch these), but the clips were totally unrelated to the film. Bizarre... 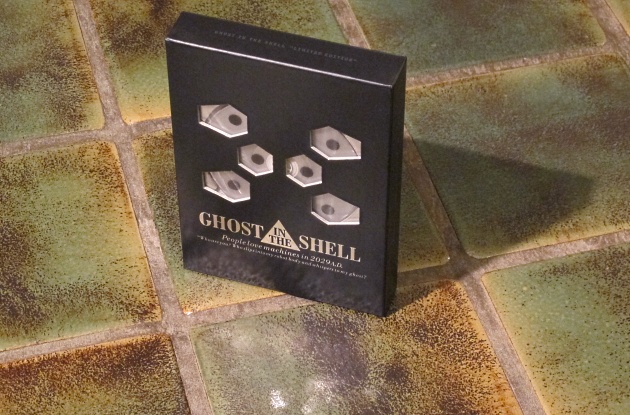 When I started to import stuff through use of the Internet, it suddenly hit me that the Japanese would probably have a darn better DVD of Ghost in the Shell than the placebo I owned, and seconds later I found it online. I had my fingers crossed it would feature English subs, and indeed it did!

But before I could order it my eye was drawn towards the alternatives mentioned in the webstore, one of which was something called the "Japanese Limited Collector's Edition".
Ooooooo! 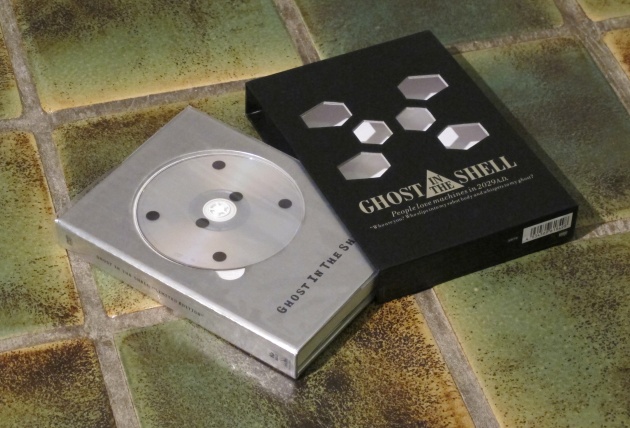 This was pretty amazing. For one thing there is the size and packaging: a tough cardboard slipcover, which contained a graphic-novel-sized hardcover book, with the DVD being embedded into the outside of the front cover! 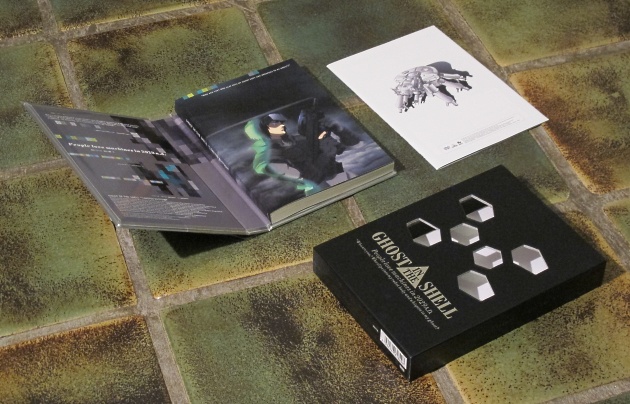 The Japanese Limited Collector's Edition, fully opened, revealing the book and the booklet. Visually, this was the best disc yet, but audiowise, this only featured the English and Japanese Dolby 2.0 stereo tracks (and English subs, thankfully).
Good 2.0 tracks, mind. For starters they timed correctly with the visuals. 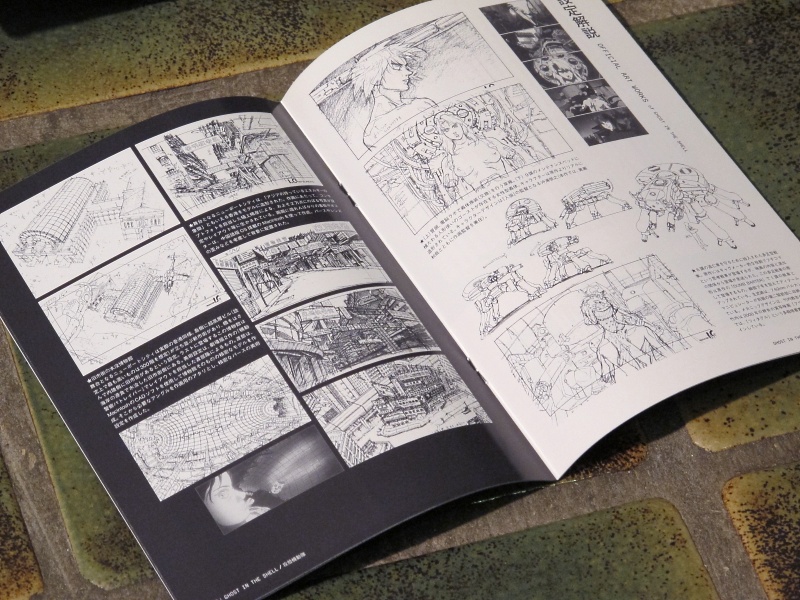 The booklet, thin as it is, shows plenty of very intricate technical drawings of the designs and surroundings used in the film. 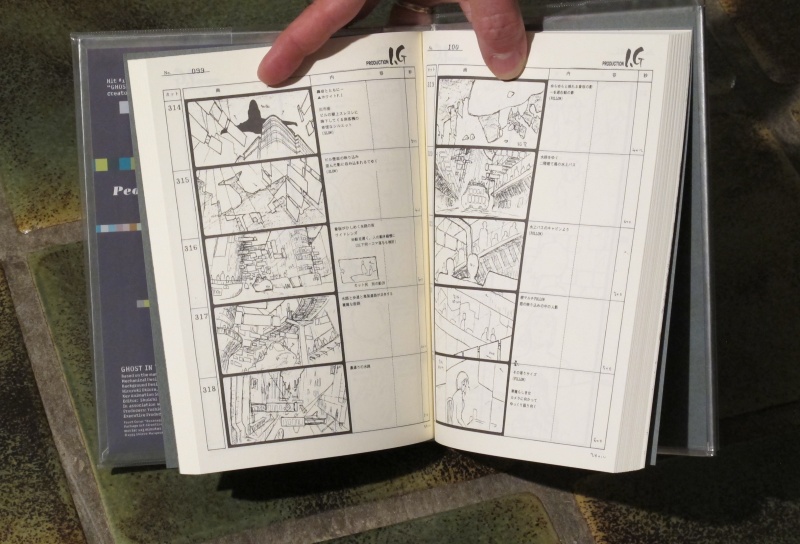 And the big 220-page book contains the full "workprint" storyboards. If you know the film well enough, you can actually ferret out some alternate takes and deleted scenes!

For non-disc related extras, this is still the best version I own. 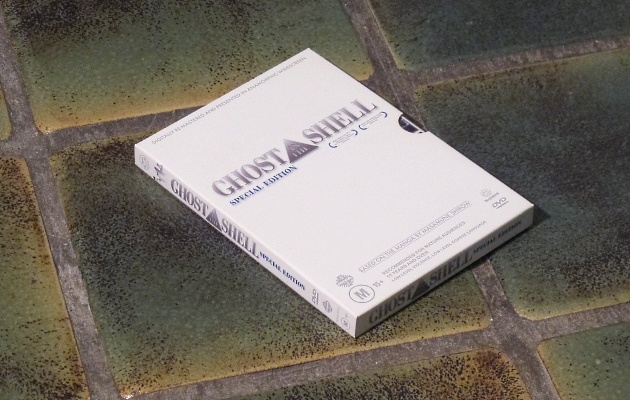 Most of the Japanese editions of Ghost in the Shell, including the Blu-rays, show a stereo Japanese soundtrack. Ghost in the Shell is known as the first anime with DTS, and upon its re-release in 2000 there were additional mixes available, so I'm not sure the whether the stereo soundtrack is a persistent oversight, or an adherence to what was attached to the film during its 1995 world premiere. Some DVD releases have DTS 5.1 mixes and one US edition even has a DTS 6.1 mix, but most of those are, indeed, remixes.

When I ran into the cheap Australian Special Edition and saw it was lauded for its Japanese DTS 5.1 mix, I couldn't help myself and bought it. And the sound on this disc is a thing of beauty... The audio gave me goosebumps, and Kenji Kawai's score touched me like it hadn't done since hearing it in the cinema. Sigh...

One thing I do find jarring in this edition, is that it fails to include the original end credits, which were underscored by Kawai's third and most extensive rendition of the "Ghost City" theme called "Reincarnation".
Instead, it features the 2000 re-release credits with the single "One Minute Warning" by Brian Eno and U2 (billed under the group name "Passengers").

Ah well, it's only a minor niggle... and until the Blu-rays appeared, this became my most played copy of the film. 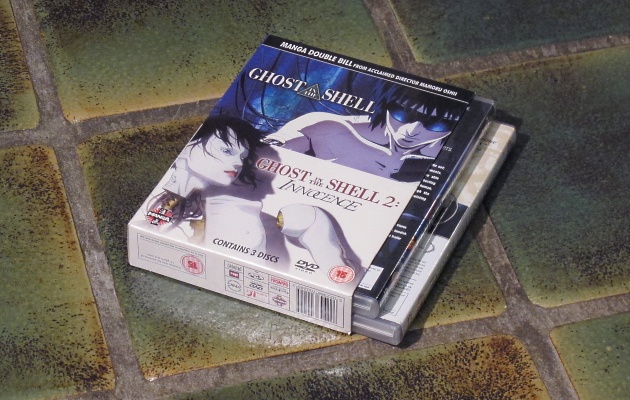 I always want friends to borrow my DVDs so we can discuss the films afterwards, or just to help them discover something which I really liked. Obviously Ghost in the Shell sits high in that list.

But I noticed a strong reluctance in me to part even temporarily with my Madman edition, while I sure as hell won't let anyone touch my out-of-print Japanese Collector's edition, and I wouldn't force the old UK edition I own upon my worst enemy.

And who has a working VHS these days?

So I clearly needed another edition. Luckily, Manga UK had a cheap double set which featured both Ghost in the Shell and its sequel-of-sorts Innocence. My DVD of Innocence was the original Dreamworks one, with the messed-up subtitles (these films REALLY don't get a break, do they?), so I liked the idea of owning a proper release of it, and get yet another copy of Ghost in the Shell which I could use to lend out to people.

It was not exactly an amazing edition: The transfer is an NTSC-PAL conversion and shows slight ghosting (haha...) and combing. It has an English Dolby 5.1 and a Japanese Dolby stereo track, and it has the "Passengers" end-track instead of the Kenji Kawai one.

But the soundtracks are in synch, and this specific release is dirt-cheap. So for buddies, colleagues and neighbors this is the ideal version to lend out! 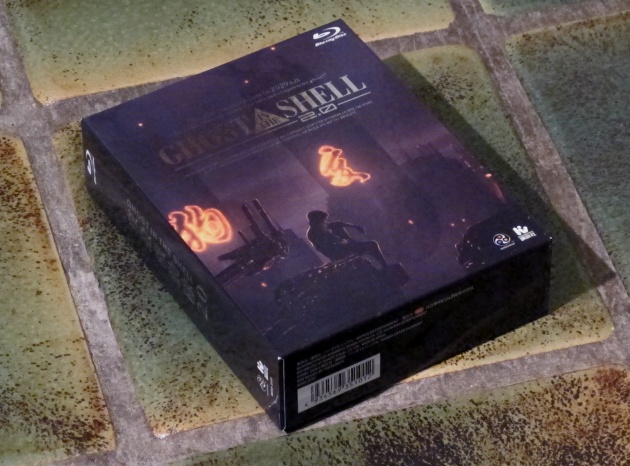 The second thing that happened, was the introduction of Blu-ray. 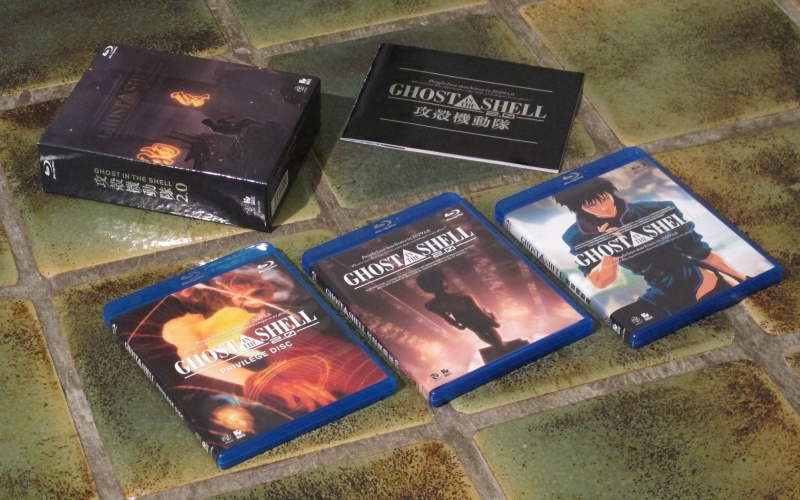 The Japanese Limited Edition Blu-ray, opened. It contains Blu-rays for both the 1.0 and the 2.0 (English subs and all), an extra Blu-ray with interviews and documentaries (alas without subs), a small booklet, and the CD soundtrack for version 2.0. 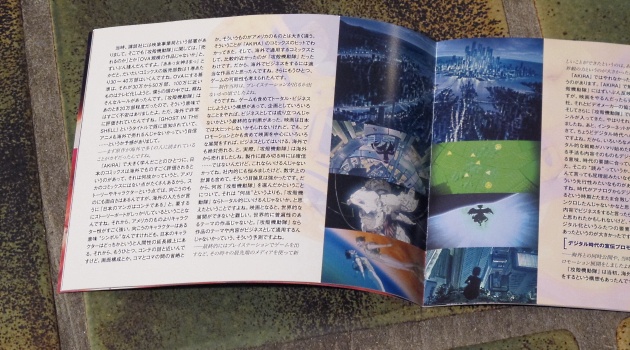 The tiny booklet in this edition is cute, but nowhere near the quality of the one included with the old Japanese Limited Collector's DVD edition (let alone the storyboard book which was in that one). 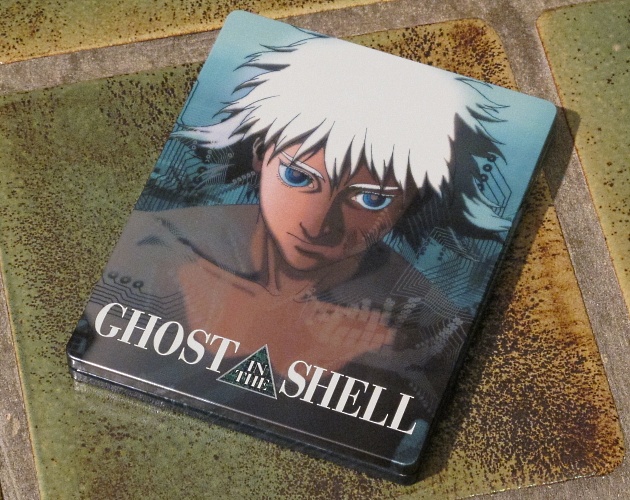 And this year, to celebrate the 25th anniversary of the manga Ghost in the Shell is based on, there are several new releases worldwide, including some for the original 1995 1.0 version of the film.

Manga UK announced a pretty-looking steelbook Blu-ray, similar to their excellent Akira release. I've given Manga UK quite a lot of grief about how they managed this title post-VHS, but I have to say their high-definition output has been great. Their Ghost in the Shell 2.0 Blu-ray from a few years ago was a good (and very cheap) edition for that version of the film, and it even contained an upscaled-from-DVD copy of the "1.0" version as an extra, to allow people to spot the differences.

This disc, however, shows Ghost in the Shell 1.0 in its full glory, with the quality of the Japanese Blu-ray but at only a third of its cost. 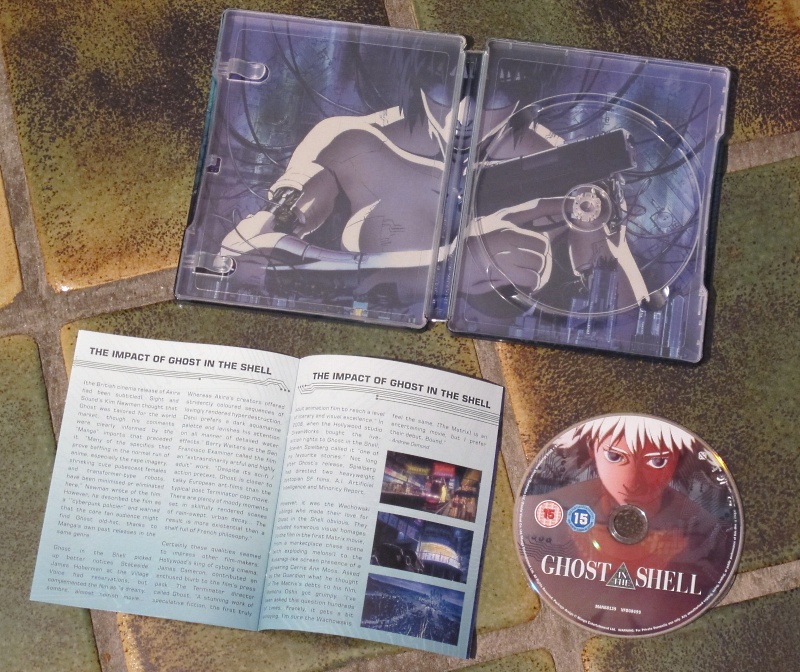 While the Manga UK Blu-ray itself is pretty much barebones with regards to extras, the booklet included is excellent. It's short, but includes an interview with Oshii and essays on Ghost in the Shell, its conception and impact. 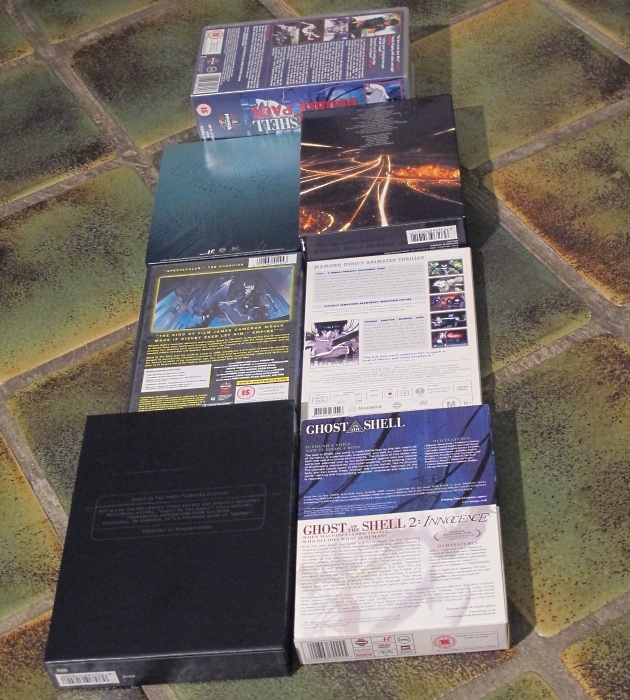