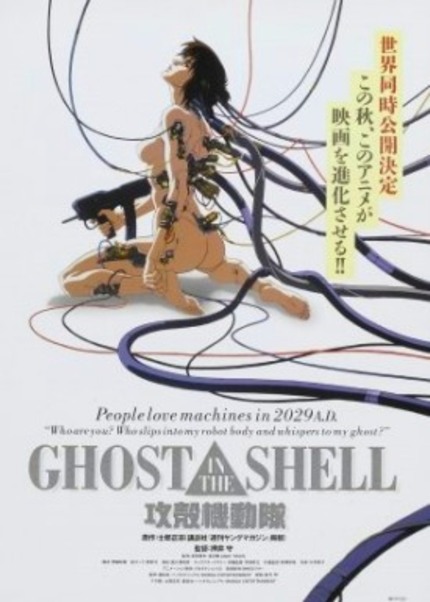 Mamoru Oshii (Tachiguishi Retsuden, Sky Crawlers, Ghost In The Shell 2.0, Patlabor 2, Tenshi no Tamago) is without a doubt my favorite director out there, so there's really no way I could ever pass up on reviewing his ultimate classic: the 1995 adaptation of Masamune Shirow's much-lauded Ghost In The Shell manga. Almost 17 years after its original release, the film still houses a truly captivating and mesmerizing power.

If Eraserhead and Tetsuo are the films that made me become serious about film as a hobby, Oshii's Kokaku Kidotai is the film that actually introduced me to the world of cinema. Sure enough I watched and liked films before this one, but only in a more simple and straight-forward entertainment-based manner. Before this film it was all jokes and gore that made me want to see a film, Kokaku Kidotai was the first film I watched that focused on atmosphere and feeling rather than just wanting to tell its story.

Kokaku Kidotai is also the film I have watched the most. At least once every two years I sit down for another fix of this film's magic. I don't really get why, but somehow it never gets stale or boring, it only takes a minute or five before I'm completely lost in the film's atmosphere, only to resurface a good hour later just as impressed with it as if I watched it for the first time. Sure there is some melancholia involved here, but beyond that I feel that time has been incredibly kind to Oshii's masterpiece.

If you want to know all there is to know about the background story it's probably best to pick up the manga first. Even though Oshii samples directly from Shirow's work, the film is a nifty reconstruction that ignores many side stories and focuses on the themes Oshii wishes to explore. The core story line is still there of course, but some events or scenes might feel a little lost if you're not well aware of the full picture. Then again, these scenes aren't exactly vital to understanding the film.

Visually Kokaku Kidotai still stands its ground. The coloring and the somewhat basic CG are the only clear giveaways that we're dealing with an older film here, the animation itself remains detailed and abundant. Shirow's character designs were toned down a little (which helps the serious character of the film) but the intricacies of his detailed settings were ported with remarkable respect and clarity. It's still a gorgeous film, even today.

But it's really Kenji Kawai's amazing score that still lends this film its captivating powers. From the unique opening music to the more ambient-inspired tunes and the sublime track featured underneath the battle with the tank (Floating Museum), the Kokaku Kidotai score is a monument amongst film scores in general, one that even managed to reach beyond the boundaries of the film world. It's an essential part of the atmosphere and one of the most impressive collaborations between director and musician I've ever encountered.

As for the voice acting, I really want to stress that the original dub is way better than the English dub, even though I practically grew up with that one. The English dub dumbs things down a bit and adds a level of cheese a film like this does not deserve. These days I even need to watch out which subtitle stream I use, as a direct transcription of the old English dub still brings back memories of the original voices (I really watched it that many times back then). If you want to know witch translation you're watching, check for a scene at the very beginning where Motoko is talking to Batou about static on the line. If Motoko is referring to a lose wire you're watching the old translation, if she refers to having her period you're watching the updated (and more correct) translation.

The centerpiece scene of Kokaku Kidotai is also right in the middle of the film. Oshii simply stops the story for a good five minutes, he picks one of Kawai's most beautiful tracks and takes the audience on a little trip through the city, slyly hinting at Motoko's identity crisis as she runs into different people "wearing" an identical body. It's something I missed the first few times I watched this film as I was too transfixed by the atmosphere, but it's a very nifty example of combining emotional cinema with storytelling. Apart from the deeper meaning though, it's also just a tremendously impressive scene in its own right.

Not only is Kokaku Kidotai an essential film in the canon of Japanese animation, together with Kubrick's 2001 and Tarkovsky's Solyaris it completes a trio of book adaptations that transcend the popularity of their originals and gave a new meaning to an already popular brand. So much that most people these days will think of Oshii's film first, only a select few will still consider Shirow's manga as the true source of the Kokaku Kidotai universe.

It's not as if Kokaku Kidotai didn't age at all or wasn't surpassed by other films (I actually liked the sequel even better), but Oshii's film remains a monument of film making that still knows to impress and entrance. It's a superb sci-fi film, boasting tons of highly atmospheric scenes and a good story to boot, even though it might require several viewings (or some background checking in the manga) to get a grip on the entire picture. It's a film that's aging gracefully and one I still whole-heartedly recommend to people who haven't seen it yet. It's not my favorite Oshii, but I'm sure it's the one he'll be remembered by.
Tweet Post Submit