Toronto 2014: THE TALE OF THE PRINCESS KAGUYA Gets A New North American Trailer 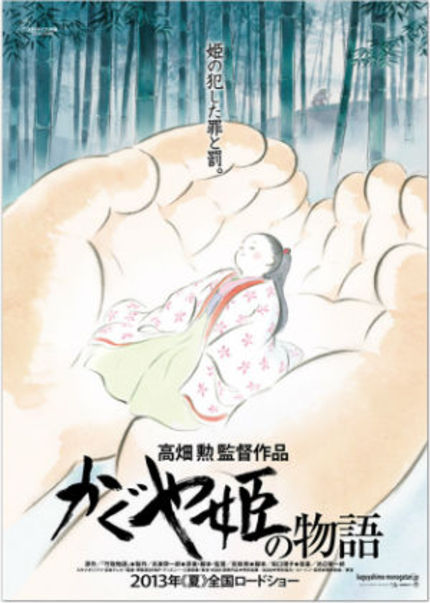 This upcoming first half of September, the Toronto International Film Festival 2014 will happen again. And one of the many treats there will be The Tale of The Princess Kaguya, the Studio Ghibli film by founder Takahata Isao.

As Cameron Bailey describes in his write-up on the TIFF webpage:


Isao Takahata is a co-founder of Japan's legendary Studio Ghibli, maker of timeless animation classics. Although he is not as widely known in the West as Hayao Miyazaki, Takahata's Grave of the Fireflies, Only Yesterday, and Pom Poko represent the best of what animated features can do: invite us into a world where anything is possible. His new film, The Tale of The Princess Kaguya, revisits a familiar Studio Ghibli theme, telling the story of a magical girl among ordinary humans.

Okina (voiced by Takeo Chii) is a bamboo cutter in ancient rural Japan. One day in the forest, he finds a tiny baby in the folds of a bamboo shoot. He brings the creature home to his wife Ounaa (Nobuko Miyamoto) and they decide to keep her and raise her as a princess. She is clearly not of this world. Kaguya (Aki Asakura) grows at an unnatural rate, soon maturing into an uncommonly beautiful young woman. Since Okina has now also found a cache of gold and treasure in the forest, every suitor wants Kaguya. But this is not a fairytale of courtship and marriage. True to the Studio Ghibli that brought us Ponyo and Kiki's Delivery Service, The Tale of The Princess Kaguya follows this strange young female as she creates her own identity.

Based on a tenth-century folk tale familiar to many Japanese people, this is not uniquely a children's film. It exhibits the finest qualities of myth, engagingly simple on the surface but containing profound lessons as well. And Takahata's imagery is breathtaking: individually drawn, hand-coloured frames that flow like a river of delicate, detailed watercolour paintings. Like Miyazaki's recent The Wind Rises, The Tale of The Princess Kaguya is an extraordinary work of art.

True words. Christopher O'Keeffe wrote a very positive review upon the film's premiere in Japan last year, and I will go one step further: in my opinion Takahata has created yet another masterpiece.

With news of upcoming screenings in North America, The Tale of The Princess Kaguya also gets a new trailer, which you can see below. And while the film as a whole is a more sedate affair than this trailer might suggest, you can clearly see how much the artwork differs from Studio Ghibli's more regular output.
Tweet Post Submit