Review: JODOROWSKY'S DUNE Delightfully Journeys Into The Brilliance That Might Have Been 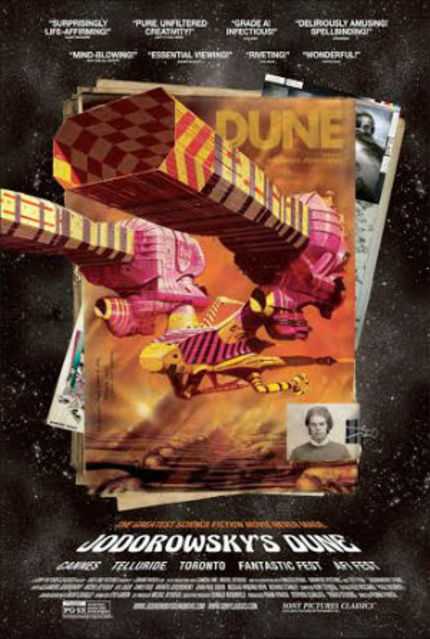 What's the most important film never made? Is it Kubrick's Napoleon? How about Gilliam's take on Don Quijote? In his excellent sophomore feature documentary of the same name, director Frank Pavich would have you believe the answer is Jodorowsky's Dune. And let me tell you this ... the man makes a hell of a case.

The film follows a relatively straightforward format of archival clips and interviews with many of the filmmakers involved in the film-that-never-was, all of whom seem quite excited to recount their memories of the process. This goes double for Jodorowsky himself, who makes up about half the interview time. A completely likeable character, Jodorowsky is lively and exuberant while telling his stories.

Jodorowsky's entire filmography leading up to Dune is discussed in detail, and we learn it was the success of El Topo and The Holy Mountain that convinced French producer Michel Seydoux to let Jodo pick whatever he pleased for his next project. Without even reading Frank Herbert's novel, Jodorowsky chose Dune and set to assembling a team of "spiritual warriors" to complete the ambitious project. Artist Moebius worked with the director to create storyboards of the entire film and Chris Foss painted detailed concept art of the otherworldly costumes and buildings.

The documentary really comes to life when Pavich uses this art to roughly animate whole sequences from the film. Stylized animation is used in a variety of ways throughout the doc and it brings delightful levity in places. Kurt Stenzel's original score is also brilliant, adding an eerie mood to the film that's slightly reminiscent of Beyond the Black Rainbow.

Things get a bit emotional when it comes time to discuss Dune's eventual fate. One of the best moments comes when we learn about Jodorowsky's reaction to watching David Lynch's adaptation of the book that was eventually made.

The final entertaining section of the doc outlines all the sci-fi classics that went on to be made by Jodo's "Spiritual Warriors," H.R. Giger's artwork for the Alien films being just one example of many. It is very clear that had Jodorowsky never attempted to make Dune, the landscape of sci-fi filmmaking over the following decades would have suffered greatly. It's also clear that we are all the better for Frank Pavich's wonderful contribution of Jodorowsky's Dune.

Review originally published during the Cannes Film Festival in May 2013. The film opens in limited theatrical release in the U.S. on Friday, March 21, via Sony Pictures Classics. Visit the official site for more information.

Do you feel this content is inappropriate or infringes upon your rights? Click here to report it, or see our DMCA policy.
Alejandro JodorowskydocumentaryDuneFrank HerbertFrank Pavich