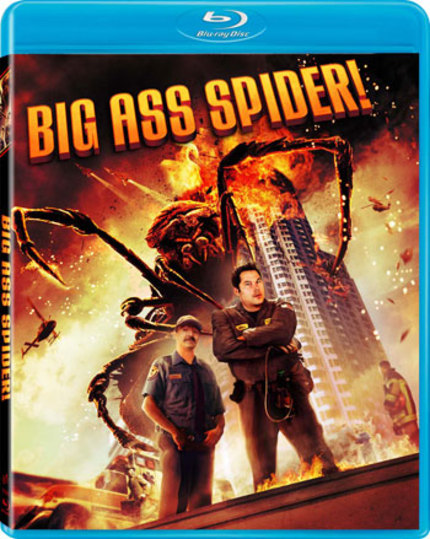 How does a low-budget creature feature become a festival circuit hit and the envy of programmers the world over? By understanding who its audience is and not taking itself too seriously.

To recap the story. Greg Grunberg is Alex Mathes, an exterminator in the city of Los Angeles who really enjoys his job. While at the hospital to have a bite looked the morgue attendant is bitten by something. Alex volunteers to take care of pest in exchange for his hospital bill and takes security guard Jose (Lombardo Boyar). The pest proves to be elusive and when the military shows up to clean up its mess it escapes into the city. There is grows exponentially to fulfill its titular role and feeds on the city's citizens. Alex and Jose must save the day, kill the spider, and get the girl before its too late.

It would be easy to dismiss a film with the title Big Ass Spider. After all, we have had to navigate the dredge of made for television movies that promise entertainment yet utterly fail to do so. With Big Ass Spider I do not have to make up a drinking game to make it entertaining for you (see here for further reference). With a very good script it rises above those other dregs. And with reasonable visual effects and a good dose of digitized violence there is enough creature in this feature to satisfy anyone.

It is almost to the movie's detriment when the spider shows up because the real entertainment value, for me, is in the comedic back and forth between Grunberg and Boyar. Gregory Gieras' script is spades funnier than any creature feature that is developed for television. While those movies take these films seriously, to the point that the ones that take themselves so seriously are laughed at the most. I believe and Gieras and Mendez understand the audience's reaction to these movies is strictly on an entertainment level so why not make the most of this opportunity and make it as damn entertaining as possible.

I echo the thoughts of Peter Martin when he saw the film at its World Premiere at SXSW last Spring.

Clearly, director Mike Mendez and his collaborators behind the camera completely buy into the idea of a cheerful, R-rated monster movie, something with the spirit of Joe Dante's Piranha or Lewis Teague's Alligator, both scripted in part by John Sayles.

As far as the home release is concerned the extra features are limited. The extras are pretty much limited to promotional material. The lengthiest extra is the SXSW World Premiere featurette. It was nice to see the Alamo Ritz in downtown Austin. Sigh. I miss it. The real goods come with the audio commentary with director Mike Mendez and his stars Grunberg and Boyar, cracking jokes from beginning to end.

Big Ass Spider is out on Blu-ray this Tuesday, January 7th. It is a really good time and you owe it to yourself to check it out.