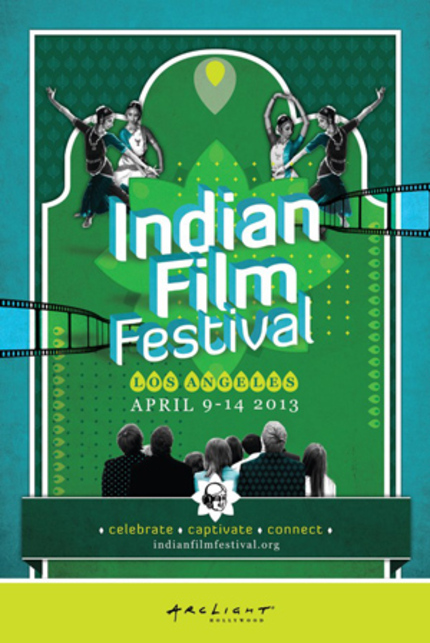 It is rare that I wish I lived in Los Angeles, but this year's Indian Film Festival of Los Angeles is making a good case for the city of angels. A few days ago we announced the opening and closing night features of IFFLA, and now we have the whole schedule to share. And It is damned impressive.

In addition to Gangs of Wasseypur and Midnight's Children, the IFFLA has rounded up some of the biggest critical and commercial hits of India's fantastic 2012, as well as a trio of classic films that I wish I could see on the big screen. The highlights for me are Ashim Ahluwalia's Miss Lovely, Vasan Bala's Peddlers (which I hope to finally be able to see and review), and my favorite film of 2012, SS Rajamouli's Eega (playing here in it's Malayalam dubbed form as EECHA). The rest of the line up brings festival hits from Cannes, TIFF, and beyond, including Shahid, Mira Nair's The Reluctant Fundamentalist, Filmistan, and Celluloid Man.

You can find the full line up as well as further information about IFFLA in the links below.

Highlights include Mira Nair's THE RELUCTANT FUNDAMENTALIST,
as well as MISS LOVELY, PEDDLERS, SHAHID, and SALMA

LOS ANGELES, CA (March 7, 2013) - Today, the Indian Film Festival of Los Angeles (IFFLA) proudly announced its 2013 lineup of narrative and documentary features and short films for this year's festival. The impressive program reflects the rich diversity of Indian cinema, which is celebrating its 100th Anniversary this year, as well as the future of Indian filmmaking, with cutting-edge filmmakers bringing their acclaimed films to Los Angeles.

Highlights include: a special screening of Mira Nair's THE RELUCTANT FUNDAMENTALIST, a political thriller based on the New York Times bestseller with a star-studded cast; MISS LOVELY by Ashim Ahluwalia, a dark look at the seedy underbelly of Bollywood C-movies and soft-porn during the 1980's, that premiered in Un Certain Regard at Cannes last year; PEDDLERS, Vasan Bala's directorial debut, which premiered at the 2012 International Critics' Week, a crime thriller following the desperation of young drug runners who are merely looking to survive; SHAHID, based on the true story of Shahid Azmi, a human rights activist murdered in India in 2010, directed by Hansal Mehta and produced by Guneet Monga and Anurag Kashyap; and Sundance and Berlin favorite SALMA, directed by Kim Longinotto, a documentary about one South Indian woman's courageous journey in the face of mass oppression.

The opening and closing night red-carpet galas were announced last week: Anurag Kashyap's GANGS OF WASSEYPUR will open the festival, while Deepa Mehta's MIDNIGHT'S CHILDREN will feature as the closing night film.

The festival is widely recognized as the premiere showcase of groundbreaking Indian cinema globally.  Celebrating its 11th year, IFFLA will run April 9 to 14 at ArcLight Hollywood in Los Angeles, the festival's home since its inception.

"Our slate of films this year showcases path-breaking works of emerging and established Indian filmmakers that are making waves at top-tier film festivals around the world," said Christina Marouda, IFFLA's Founder and Chair of the Board.  "This is a rare opportunity for Los Angeles audiences to not only catch films that are very hard to find outside the film-festival circuit, but also to engage with these talented filmmakers who are coming to Los Angeles to present their films. In fact, IFFLA has something for everyone - from cutting-edge films to Bollywood flair and thought-provoking documentaries, it is a unique, vibrant celebration of Indian cinema right in the heart of Hollywood."

Attending the festival this year to present their films will be a host of celebrated filmmakers, including Mira Nair, Deepa Mehta, Anurag Kashyap, Guneet Monga, Hansal Mehta, Vasan Bala, Nitin Kakkar, and S.S. Rajamouli among others.

Other titles of note include a documentary about India's obsession with cricket called BEYOND ALL BOUNDARIES, which will have its world premiere at the festival, and the Malayalam extravaganza EECHA, a delightful tale of love, rebirth, and revenge with dazzling special effects.

Two films at the festival this year celebrate the power of Indian cinema: CELLULOID MAN, a documentary about beloved Indian film expert and archivist P.K. Nair, and the charming FILMISTAN, the fictional tale of one man's love of Hindi films and how cinema has the power to unite us all.

More information about all the films in the line-up can be found below and at  http://www.indianfilmfestival.org.

Epic in scope, GANGS OF WASSEYPUR I and II is a mafia revenge saga that chronicles the violent and bloody decade-long turf war between two mob families.
Hindi with English Subtitles

EECHA flies into our hearts and proves that with true love, even the most unlikely of heroes can conquer any adversity, no matter how large - or in this case, how small.
Malayalam with English subtitles

The story of two brothers immersed in the seedy underbelly of Bollywood C-movies and soft-porn during the 1980's. MISS LOVELY made its world premiere in competition in the Un Certain Regard at the 2012 Cannes Film Festival.
Hindi with English subtitles

PEDDLERS, debuting at the 2012 International Critics' Week, which runs parallel to the Cannes Film Festival, is a crime thriller following the desperation of young drug runners who are merely looking to survive.
Hindi with English subtitles

Based on the best-selling novel by Mohsin Hamid, THE RELUCTANT  FUNDAMENTALIST is a riveting thriller about the story of Changez, a young Pakistani man chasing corporate success on Wall Street in the era of globalisation.
English

Shot in secrecy, SHAHID is based on true events and the life of Shahid Azmi, a defense lawyer and human rights activist who was murdered in 2010 at the age of 32, in retribution for his defense of a man accused in the Mumbai terror attacks.
Hindi with English subtitles

An exploration of the life and work of the legendary guardian of Indian cinema, P.K. Nair.
English

Meet Maya: a 42 year-old from Chennai, India, who goes through a life-changing sexual- reassignment surgery.
English

Master documentarian Kim Longinotto returns to IFFLA with her latest compelling work, SALMA, the extraordinary story of one South Indian woman's courageous journey in the face of mass oppression
Hindi with English subtitles

KABHI KABHIE remains one of Hindi cinema's most beloved films. Sweeping several awards, it began a definitive tradition of romance in Hindi cinema, which Mr. Chopra mastered to perfection and his fans came to love.
Hindi with English subtitles

A melodrama in the best sense of the word, SILSILA is stunningly shot in spectacular locations. It is remembered both for its pairing of Amitabh and Rekha and its evocative poetry. A must-see for lovers of mainstream Bollywood cinema.
Hindi with English subtitles

Shot in beautiful locations in Switzerland, the CHANDNI was a turning point for Chopra and established him as the successful commercial director of the 1980s. Sridevi was to become the star of the decade and the film launched what was to become Bollywood's signature style: a musical genre combined with an ensemble cast.  CHANDNI must be seen on full screen in order to appreciate Chopra's signature elements: stunning sets, costumes, colorful landscapes all mingled with a star cast.
Hindi with English subtitles

This is what happens in Hollywood when three 'brown' actors meet with an entertainment exec to pitch their latest internet masterpiece.
English

Fed up with entertaining a slew of annoying guests, Minocher defies her traditional Parsi community and mourns the loss of her husband in her own way.
English, Gujarati with English subtitles

Searching for a connection to the motherland...through your stomach.
English

A village, standing at the crossroads between tradition and modernity, is seen through the curious perspective of a young boy.
Hindi with English subtitles

A bold and personal look at Sikh hip-hop artist, Humble the Poet, a second generation South Asian poet and musician defining his own cultural identity.
English

A nun residing in a monastery hides her daughter from an approaching military as civil war ravages modern day Sri Lanka.
Tamil with English subtitles

Who needs a camera to make a film when you have a cardboard box, a magnifying glass, an old VHS tape and a chicken?
Telugu with English subtitles

Fawzia falls under the spell of Bollywood heroines and their promise of love and feminine perfection - in a queer light.
English

Fed up with his wife's lack of sanitary menstrual hygiene, a poor villager takes matters into his own hands, and unexpectedly starts a small revolution resulting in a million jobs for rural women.
Tamil with English subtitles

A lush, visual exploration of the transcendental space between memory and dream.
English

An elderly woman remembers her youth back home in Calcutta, India in beautiful animation.
English

One odd day, every single boy at a reform school becomes obedient.
Hindi with English subtitles

Tall tales, dreams and stories are spun as Western society's least wanted clothes are literally unraveled a world away.
Hindi with English subtitles