SAIFF 2012 Review: MISS LOVELY Is One Of The Most Excitingly Original Indian Films Of 2012 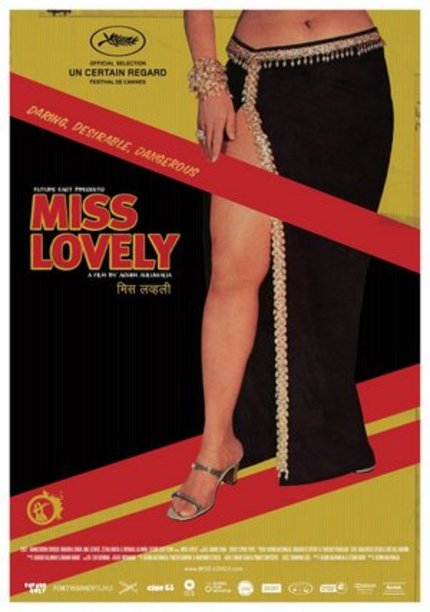 Among the toasts of Cannes' Un Certain Regard section this year was Ashium Ahluwalia's Miss Lovely, a film chronicling the ups and downs of a couple of small potatoes film producers with dollar signs in their eyes. The film takes turns frustrating and tantalizing its audience with equal ease, and all for the good of art. While many will probably tell you that Miss Lovely is grade-A wankery, I hold a rather different opinion on the matter. I think it sits proudly on the vanguard of the new Indian cinema that has been simmering for several years now, and with films like Miss Lovely, is finally reaching it's boiling point. Miss Lovely is both an adoration of the sleazy underbelly of late '80s z-grade Hindi films and a Boogie Nights-styled cautionary tale, and in both cases, I found myself riveted by the actors, action, and avant-garde splashes that spice up this film giving it that distinctive masala flair.

Nawazuddin Siddiqui and Anil George are Sonu & Vicky, the Duggal Brothers, a pair of low-rent sleaze peddlars who make their bones shooting and self-distributing no-budget horror and skin flicks to the hundreds of rural movie houses in the north of India. The film begins as a brief practical history lesson regarding people like the Duggal Brothers and the way their films got distributed. It's ugly, it's sleazy, and, surprise surprise, it's corrupt as all hell. Even as these brothers scrape by and attempt to go somewhat legit, their are repeatedly defeated by their own greed when they resort to fleeting flashes of forbidden skin in their films to sell them to local movie houses one at a time. Nudity is still more or less verboten in Indian films, and so the brief glimpse of nipple we see at the outset pretty much guarantees that Miss Lovely will never get any kind of commercial release in India, but that's kind of the point.

When Sonu decides that he's going to try to take he and his brother's business upscale by making a true Bollywood style romance, Vicky starts to see his profit margin shrinking and steps on his younger sibling with every chance he gets. Even so, Sonu begins fantasy casting his dream venture, titled Miss Lovely, with a beautiful ingenue named Pinky, and things all begin to go to hell. Sonu's violent rages begin to pale in comparison to the storm seething within Vicky, and somebody's not going to make it out of this business in one piece.

I am tempted to say that the film's greatest single strength is the performance of Nawazuddin Siddiqui as Sonu, but I have to be a bit careful with that statement because there is so much to this film that it's difficult to single out any one aspect. Siddiqui is certainly the acting highlight of the film, his performance as the sensitive, subservient Sonu is tortured and torturous to watch. Seeing this man beaten like a rented mule both physically and emotionally at the hands of his own flesh and blood is painful, but this is a character to which Siddiqui comes with much experience. Playing tortured, misunderstood misanthropes is Nawazuddin Siddiqui's area of strength. He has at least seven (more like seventeen) films under his belt this year, everything from blockbuster Kahaani to indie gangster epic Gangs of Wasseypur, you name an independent Indian film production from 2012, and Siddiqui's in it. There's a reason for that, he may be the next Irrfan Khan, an Indian character actor who crosses over to the world stage and makes a serious splash. You'll want to know his name, trust me.

Siddiqui isn't the only strength of the film, Ahluwalia's amazing visual sense and fluid narrative storytelling is a beautiful thing to watch unfold. The film isn't strictly plot driven, however, if it were it wouldn't be neatly as interesting as it is. We float back and forth between the adventures of Vicky and Sonu and the film world in which they survive. Miss Lovely is dotted with pitch perfect recreations of some of the sleaziest Hindi creature features of the '80s, the kind that faded into obscurity at the beginning of the '90s, when multiplex culture began to kill the concept of the rural grindhouse. Not only does Vicky feel his grasp on his younger brother slipping away, he also recognizes the fact that the market to which he's dedicated his life is disappearing, and sure enough, twenty years after the film's events take place, the culture is just not the same.

There are some who find the film tedious and its free form narrative frustrating, but Miss Lovely has a lot to offer to the careful and conscientious viewer. Ashim Ahluwalia's film is bold and singular, his vision: clear and concise. His film may not be a simply told story, but Miss Lovely is most definitely among the most challenging and atypical Indian features of the year, and that is almost worth supporting by itself. However, I give it my hearty recommendation, based not upon what it isn't, a cookie cutter romantic tragedy, but upon what it is, an idiosyncratically self-reflexive piece of cinematic art that will leave you drained as you leave the cinema.