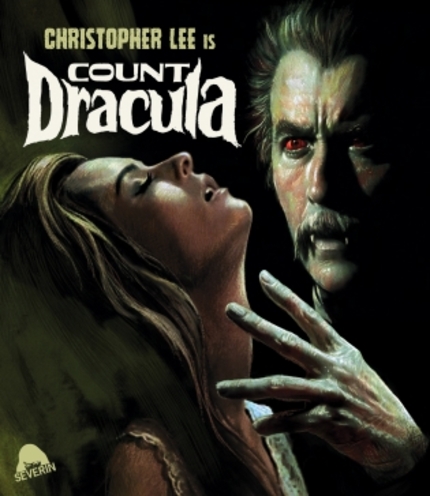 Back in 2012, I reviewed a Jess Franco film on Blu-ray from Redemption Films (Female Vampire) and marveled at the fact that this director, one of cinema's most enduring cult icons, was being rediscovered and given the HD treatment. At the time, it was the first US Blu-ray release of the director's work, though far from his most accessible or qualitatively his best film. Fast forward to today, three and a half years later, and Franco's oeuvre is surprisingly well represented both in the US and abroad, thanks to the efforts of labels like Kino/Redemption, Blue Underground, and Severin Films. That last label is especially committed to bringing Franco's work to Blu-ray and their latest effort, the Christopher Lee starrer Count Dracula, is yet another comprehensive package well worth seeking out.

Count Dracula's greatest claims to fame are two-fold. First of all, there is the presence of the screen's most prolific Count, Christopher Lee reprising the role that made him famous at Hammer. The other asterisk belongs to Jess Franco's determined claim that his is the truest adaptation of Bram Stoker's famous novel to the silver screen. Even though Dracula had been made over and over by Universal from the '30s through the '50s and by Hammer from then on, each of his multiple incarnations had been liberally adapted from the source text, much to the chagrin of Lee, an avowed bibliophile. When Franco and his producer, the notorious Harry Alan Towers, decided to offer the project to Lee with the promise that it would be the most literary to date, he couldn't help himself and the rest was history.

Due to the story's omnipresence as a staple of modern folklore, I feel no need to recount its details. What is important about this version of the film is not the “what”, but the “how”. Lugosi's Dracula was a sensual beast, drawn the the warm blood of his innocent victims. What he was not, however, was a great orator. In spite of his history with the character on the stage prior to Universal's film version, Lugosi was still a fairly recent immigrant with a very heavy accent. While it wasn't quite enough to make his speech indecipherable, it did limit his ability to monologue at length. Hammer's Dracula, on the other hand, was a far more feral beast, savage to the point of truly challenging the censors for years. Hammer did not shy away from the lustier elements of the Count, however, he wasn't the suave Dracula that Lugosi put forward, either.

For all of the work that he did on the role over the years, Christopher Lee was never completely satisfied with the character in his Hammer films, and when given the opportunity to resuscitate the character for Franco in a way that allowed him more breathing room as an actor, he jumped at the chance. As a result, this Dracula is far more eloquent and less gruesome and gory than his Hammer counterpart. In fact, the film is surprisingly subdued in terms of the more visceral horror that audiences expected from a Christopher Lee Dracula. Lee imbues this monster with a greater pathos and love for the sound of his own voice than audiences were – and are – used to. The result is possibly more faithful to the book, but certainly less viscerally engaging.

While Lee is by all means the star of the film, he's not alone in delivering a memorable performance for Franco. Also prominent in the film is the late Soledad Miranda (Vampyros Lesbos) in the role of Lucy and a wonderful supporting turn from Klaus Kinski as Renfield. Miranda gets plenty of screen time, and while I do think she's better in her solo leading performances, she is quite good here as well. Kinski, however, steals the show in his minimal time on screen as Renfield. Dwight Frye's performance as the character in Tod Browning's original film is one of my all-time favorites, but Kinski certainly gives him a run for his money here.

Franco's Count Dracula may or may not be the screen's most faithful adaptation of Stoker's novel, however, it is certainly unlike most attempts at the material, and with source material so well-trodden, that's to be commended at least. This is one of Franco's straightest films, thanks I'm sure in no small part to Lee's presence. Surprisingly little blood and gore and all breasts safely spared the light of day – or night – Franco does a fine job and for those to whom Jess is a four-letter word, this might be a good place to start.

Severin Films' Blu-ray of Count Dracula looks and sounds very good. It's roughly on par with most of the other Franco Blu-ray releases from Redemption, though I haven't yet checked out Blue Underground's releases to check. It's certainly a step up from the older Dark Sky Films DVD release, and the volume of bonus material here is more than enough to make up for any faults with the A/V presentation, of which none were glaring enough to mention.

The bonus material is spearheaded by the strange, black and white silent behind the scenes feature Caudecuc, Vampir, an expressionist behind the scenes film that is less documentary than fly on the wall alternate feature. At a little over an hour, we get a great range of footage of the film being shot with Lee both in and out of character, fascinating stuff. If that were all, it would be more than enough, however, there are hours more material on this disc to keep fans busy.

In addition we get an audio commentary with supporting actress Maria Rohm and historian David Del Valle that is heavy on history and anecdotes between this Rohm's career as an actress and her private life as the wife of Harry Alan Towers. There are also several lengthy interviews, including one with Franco, another with Jack Taylor, and a third with co-star Fred Williams in which all three discuss the process of working on this film and the many others one which the three collaborated. There is a brief appreciation of Count Dracula by Christophe Gans, director of Brotherhood of the Wolf, and finally a 90 minute abridged reading of Stoker's novel by the mellifluous Christopher Lee, in which the words simply melt as they roll off his tongue. Round it out with alternate titles cards for different languages and a German trailer and you've got well in excess of three hours of bonus material to sift through.

Franco fan or not, Count Dracula is a sold film and this presentation from Severin is impressive, even by their own very high standards. Definitely recommended.

Do you feel this content is inappropriate or infringes upon your rights? Click here to report it, or see our DMCA policy.
count draculajess francoseverin films