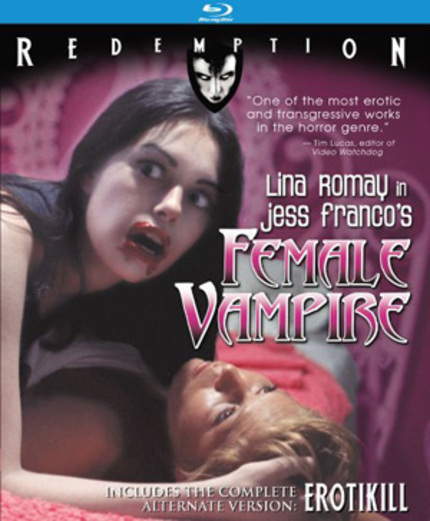 Four words I never thought I'd type, but here we are. While this is obviously proof that the Mayans' Doomsday calendar is right, I suppose it's only just that we enjoy the spoils of the apocalypse while they are ripe. Redemption Films deal with Kino has produced a great number of gems ripe for rediscovery, films that would never have made it to HD without the clout of a venerable company like Kino behind them. The question now becomes, is it really worth it?

Jess Franco has made somewhere in the neighborhood of two hundred films in his life. By the law of averages, at least a few are bound to be pretty decent, though people who've seen any substantial percentage of Franco's films will tell you that, while his work is certainly recognizable, it's rarely great. Female Vampire, the first of these Redemption releases, is a very strange beast, both in terms of content and quality, which leaves me a bit stymied when it comes to a close analysis of the presentation, however, that's why I'm here, so I'll give it my best shot.

The plot, such as it is, of Female Vampire involves Irina, the vampiress, played by Franco's muse and longtime wife Lina Romay, wandering from man to man, draining their life force. Typically in a film like this, there would be some gruesome blood letting and flesh tearing, but this female vampire runs on an alternative fuel source, you might say. This Female Vampire fellates her victims, and at the moment of climax she devours their "life force", and they die. I'm not exactly sure how they die, but I suppose if you've got to go, that's about as good as it gets

Honestly, unless you're a big fan of giant gyrating '70s bush, there's not a whole lot here to recommend. The film is a bit torpid in terms of the strained eroticism that Franco forces into overly long "love" scenes, and the bits in between with Franco on screen as a reporter are even less engaging and feel as though they were shot for another film entirely. The cinematography is horribly amateurish, the dialogue sync is frequently off, and Romay's acting consists of little more than walking around slowly wearing nothing but a cape, knee high black boots, and a leather belt, since her character is hilariously mute in the film. However, in spite of all this, there is still something mesmerizing about Female Vampire that won't leave me.

The last Franco film I reviewed, Countess Perverse, was without a doubt a significantly better film, however, there is something to be said for the repetitive, hypnotic nature of Female Vampire. Irina's violent sexual urges ooze from every pore in her body, and it's quite unnerving at times. When she has no human victim, she turns her aimless lust toward any number of objects, including a truly creepy sexual encounter with a bed post. That's just the kind of film Female Vampire is.

When it comes to Jess Franco films, I can't imagine that I would've chosen this as the first to get a Blu-ray release, but then again, I'm not the guy pulling the strings. Sex sells, even when it's boring, and this is sexy and simultaneously boring and weirdly engaging all at the same time. There is no universe in which Female Vampire would be considered a great film, however, to a certain segment of the Eurohorror fan community, it could possibly be considered a good film, though I'm still not even sure where I fall on that continuum. Definitely something you should try to rent before committing if you've never seen it.

As I mentioned above, there is a distinct lack of style and technical competence behind the creation of this film that makes it difficult to accurately determine what it should look like on Blu-ray. I can say that the film's colors appear to my eyes to have an unnaturally cold, bluish tint. That certainly could have been Franco's intention, however, viewing the DVD of Countess Perverse leads me to believe that probably isn't the case. In addition to the strangeness with the colors, there is also the double whammy of poor focus throughout the film and significant damage to the source material at several points. This is not a film that was given the red carpet treatment when it comes to restoration, and I can't say I blame them, however, it's pretty rough looking. I would imagine that the level of detail is probably better than previous DVD editions, but it's definitely hard to tell. Mondo Macabro's Countess Perverse on DVD was a much better visual presentation, take from that whatever you want. The audio is better than the video, and both the French and English language dubs are relatively clean, despite the sync issues.

What really puts this release out ahead of other DVD releases of the same film is the new bonus content. We get a decent length interview/retrospective with Jess Franco (thankfully subtitled) directed by Severin Films head honcho David Gregory. Gregory and Franco have a long working relationship as both Severin and Intervision have released works by the director, so even though Gregory is not on screen, there is evidence of good rapport between the two men. There is also a brief tribute to the late beauty, Lina Romay, by David Gouyette, who has also contributed heavily to the Redemption Rollin series. Last, but certainly not least, is the full length "horror" version of the film titled Erotikill, which jettisons much of the extended sex and adds violence. Erotikill only runs for seventy minutes, which is probably a blessing in this case.

If I hadn't gotten this for review, it is very likely I would have bought it just for the novelty of having a Jess Franco film on Blu-ray. However, if you aren't a diehard fan, I'd probably wait for a better film before making the leap.