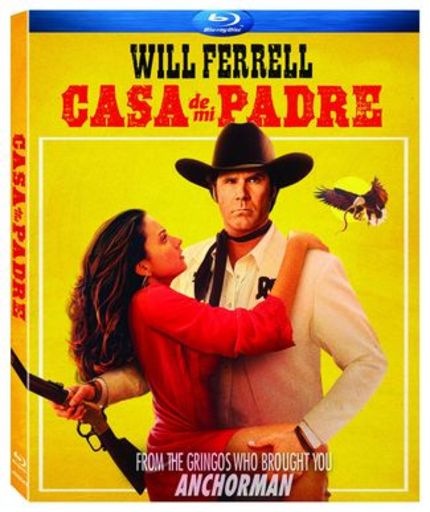 When the first teaser for Matt Piedmont's Spanish language comedy, Casa de mi Padre, appeared online, I was simultaneously baffled and exciting. Will Ferrell is an actor who has had a lot of mainstream success, but who doesn't get a whole lot of respect in the process. The fact that he was willing and able to headline a film in a language he doesn't speak and that he manages to pull it off so remarkably well is proof of his bravery if nothing else. However, Casa de mi Padre is more than simply an extended joke, it is an avant garde masterpiece that tears apart the already outre world of the Spanish telenovela and reassembles it as a feature length tribute to the best and worst of Mexican trash culture.

Will Ferrell is Armando Alvarez, a simple farmer's son who tends his father's land with his compadres Efren Ramirez (Napoleon Dynamite) and Adrian Martinez. When his brother Raul (Diego Luna) returns from the USA with his new fiancee, Sonia (Genesis Rodriguez, a telenovela veteran in Mexico), Armando's father Miguel (the late Pedro Armendariz in his final role) welcomes him home with open arms, while shoving Armando into a corner. A local druglord known as La Onza (Gael Garcia Bernal) shows up on the scene, and Raul's true colors begin to show as a turf war breaks out. It is up to Armando to save the family ranch, but can he find it within himself?

The story is the stuff of any number of old westerns, the acting comes straight out of the Mexican daytime soaps that have entertained for decades, and the production design is a little bit exploitation and a little bit Plan 9 From Outer Space. No matter what you expect going into Casa de mi Padre, you're almost guaranteed to come out with at least a half dozen surprises, though whether that is a good thing or not depends entirely on your level of patience and willingness to suspend disbelief or at least take the ride.

You see, Casa de mi Padre is not a conventional narrative in any way. The storytelling is rather straight forward, though appropriately melodramatic for the style, but that's about the only thing that is straight forward. Within about five minutes of the film's opening scene, we get our first glimpse of what the film is really like, when Armando and his farm hands witness a murder. The murder obviously takes place on location in southern California, while they are even more obviously witnessing the act from a completely unconvincing sound stage. This mix of the real and the surreal goes on throughout the film, sometimes you can see it coming, and then there are occasions on which it will completely blindside you. I can think of a couple of moments in the film during which an audience member couldn't be blamed for simply standing up and walking out, though thankfully that didn't happen the first time I saw it theatrically.

Perhaps the most remarkable thing about Casa de mi Padre, apart from the fact that is got made at all, is the incredible amount of talent on display for such an oddball little movie. In addition to Will Ferrell, who acted his part having learned his lines phonetically, two of the greatest actors to come out of Mexico in decades have major supporting roles. Diego Luna and Gael Garcia Bernal first came to the attention of the English speaking world with their performances in Mexican coming of age drama, Y Tu Mama Tambien. Since then they've each made their marks on the film world, Garcia Bernal as an adventurous soul with Michel Gondry's The Science of Sleep and The Crime of Father Amaro, and Luna has appeared in films like Gus Van Sant's Milk and the unfairly buried Nicotina. These two actors know the world that Casa de mi Padre inhabits, they grew up with these telenovelas, and they are able to deliver remarkable performances as the sleazy, smarmy villains that fans of trashy Mexican drama are accustomed to.

Last but not least is the late Pedro Armendariz, Jr. as patriarch Miguel Ernesto Alvarez. This was Alvarez's final role, and one in which he really shines. In a career spanning nearly fifty years, Armendariz made his mark on both sides of the border, and was able to bring his hefty experience in film and on TV to bear in Casa de mi Padre. From 1973's original TV movie, Don't be Afraid of the Dark, to Mark Rbbson's Earthquake, to 007's License to Kill, and beyond, Armendariz was as dependable an actor as there was. The fact that the avant garde  Casa de mi Padre speaks to his adventurous spirit, and he makes for a wonderful jefe.

Casa de mi Padre is currently fighting it out for a spot in my 2012 top ten. There's a lot of time left in this year, but this film hits such a primal chord with me that it will be hard to knock it loose. I spent much of my childhood watching my grandmother crochet on her couch while watching these telenovelas on TV and cursing at the stupid tramps and evil mustache twirling villains onscreen. So watching this film brought back fond memories. Does that could my objective opinion? Certainly, but if all criticism was objective, wouldn't that be terribly dull? Casa de mi Padre is definitely worth checking out.

Casa de mi Padre on Blu-ray looks and sounds pretty good. In an attempt to make it somewhat faithful to the material that inspired its creation, the quality of the image varies throughout the film. The color scheme falls very much on the warm side; reds, yellows, and browns dominate the palette, but that's how it looked on the big screen, so I'm okay with it. The image is sharp, but not too sharp. The image feels rather timeless, instead of being a product of any given time, this film looks like it could have come from Mexico in any time period over the last 40 years. The sound is also very good, though there isn't much flash in that department apart from a shootout toward the end, but it all turns out fine. No complaints, it's hard to screw up new releases, but somehow it happens a lot, Casa de mi Padre is not one of those, though.

On the extras front we are treated to quite a bit of material to help contextualize the material. There is an audio commentary with Ferrell, director Matt Piedmont, and writer Andrew Steele. This is a fun track that manages to give some context to what's going on while occasionally devolving into giggling fits as these three grown men realize what they've created and just how silly the whole thing is. A good attitude on a commentary track goes a long way, and this one is very listenable because of the relationship that these men have obviously built. There is a fifteen minute behind the scenes featurette that talks will all of the heavies on the film, but not nearly enough. I wish there'd been more interview footage with Garcia Bernal and Luna, but such is life. Also included are about 15 minutes of deleted scenes, some fake commercials for the products in the film, and what is mentioned as Pedro Armendariz's final interview. This last piece of touching in hindsight, though unfortunately the wind during the interview makes most of it completely unintelligible. An opportunity lost, I think.

Casa de mi Padre is not for everyone, but I absolutely adored it, and you can expect to see it again when the year end list rolls around.