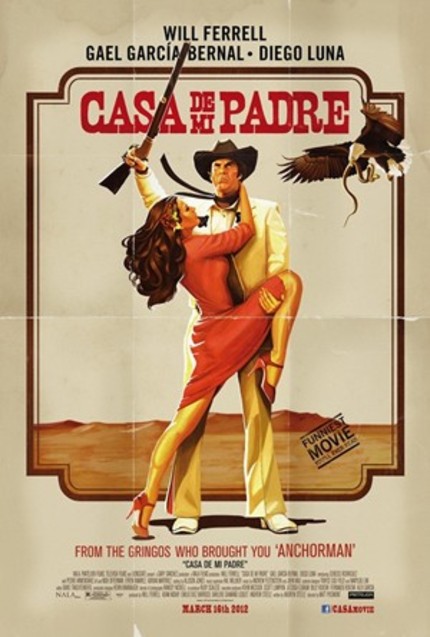 Culled from the film's opening act this new clip will tell you pretty much all you need to know about Will Ferrell's new Spanish language comedy Casa De Mi Padre. No, it's not the biggest or broadest moment of the film - not by a long shot - and the thinking behind selecting this as a promo is a bit baffling - just as the idea of Ferrell making a Spanish comedy is baffling - but I feel quite confident in saying that if you find this funny, you'll find the whole movie funny.

Armando Alvarez (Will Ferrell) has lived and worked on his father's ranch in Mexico his entire life. As the ranch encounters financial difficulties, Armando's younger brother Raul (Diego Luna), shows up with his new fiancé, Sonia (Genesis Rodriguez). It seems that Raul's success as an international businessman means the ranch's troubles are over as he pledges to settle all debts his father has incurred. But when Armando falls for Sonia, and Raul's business dealings turn out to be less than legit, all hell breaks loose as they find themselves in a war with Mexico's most feared drug lord, the mighty Onza (Gael Garcia Bernal).