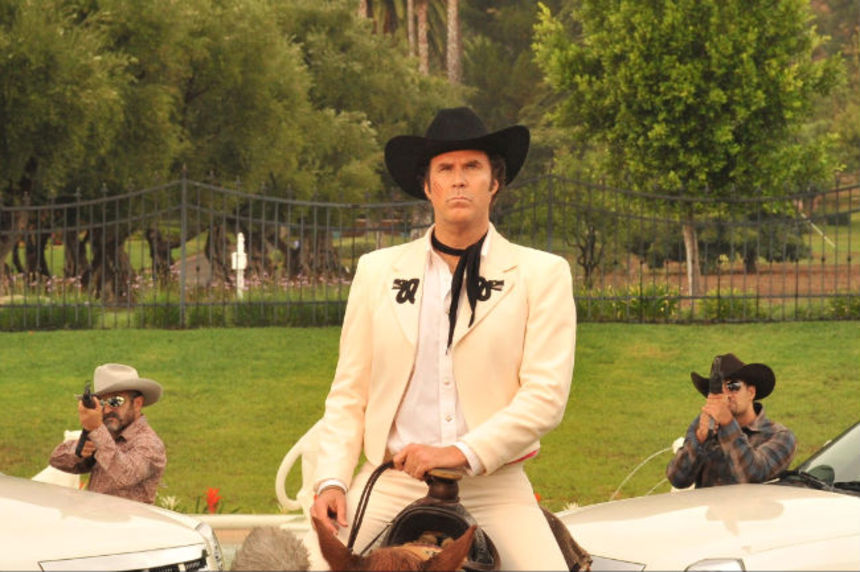 The admirably bizarre feature-length sketch known as Casa De Mi Padre seems to make a firm argument for "yes" on all of those earlier questions. While it's uncertain if fans will flock to this enjoyable curiosity the way we all do to movies like Anchorman and Talladega Nights -- frankly I doubt it -- Casa stands as a firm statement that Will Ferrell hasn't lost his knack for overt earnest weirdness, legitimately funny self-deprecation, and a dedication to taking some chances once in a while.

In other words, this is not likely to be a Will Ferrell-sized smash hit, but I don't think that anyone involved with the flick expects it to be. They thought it was an amusing lark, so off they went. "They" being former SNL writer Andrew Steele and "Funny or Die" co-creator Matt Piedmont, plus a whole bunch of doubtlessly bemused cast and crew members. They created something that may make no sense to American movie audiences: a strange and violent, yet still kinda sweet, western comedy that pokes a lot of fun at Spanish soap operas and obscure exploitation films at the same time. And if you don't get the overall "framing" joke, there's still plenty of patented Ferrell oddness, and he's capably flanked by funny performers like Diego Luna, Efren Ramirez, Gael Garcia Bernal, and, oh my yes, we need a paragraph break to talk about ...

Ms. Genesis Rodriguez, who is "presented" in Casa De Mi Padre, although she did appear in Man on a Ledge a couple of months back. In both films, but particularly in this new Ferrell flick, Ms. Rodriguez is not only stunningly pretty and curvy in all the best places, but also very funny, quick on her feet, and a very likable on-screen presence. She's sweet, sexy, funny, etc., in Casa De Mi Padre, but you should expect to see a lot more of Genesis Rodriguez in future films. Be grateful, men. She's amazinggg.

The plot is as intentionally generic as they come: Ferrell is a dim-bulb little brother to a sleazy drug dealer, but then an even sleazier drug dealer starts messing with the family ranch, and then all sorts of wacky mayhem breaks loose. Kudos to Mr. Piedmont for his often silly / sometimes lovely visual ideas, and to Ferrell and his castmates for allowing a "skit concept" to blossom into a full-fledged movie, but mostly to Mr. Steele for throwing a wide variety of comedy into the Casa mix. The gags range from simple mockery of sloppy filmmaking to subtle touches only a Spanish housewife would understand, and (at its best moments) various visual non-sequiters that make little sense, but sure do hit the screen with a welcome sense of silliness.

Either a labor of love for all involved, or some kind of wager made over a few bottles and bong hits, Casa De Mi Padre may not be as "uproariously" funny as Ferrells' most popular films, but in a way it's even better. It's odd, goofy, affectionate, creative, and sly -- and it's indicative of a big-time movie star who's willing to spend time on something that's not a sure-thing guaranteed smash at the box office. Basically, when we all look back over the guy's colorful movie career, I expect that this one will continue to stand out as a fan favorite, cult classic, or somewhere in between.

Casa de Mi Padre screened as a special presentation at SXSW last night. It opens wide across the U.S. and Canada on Friday, March 16.