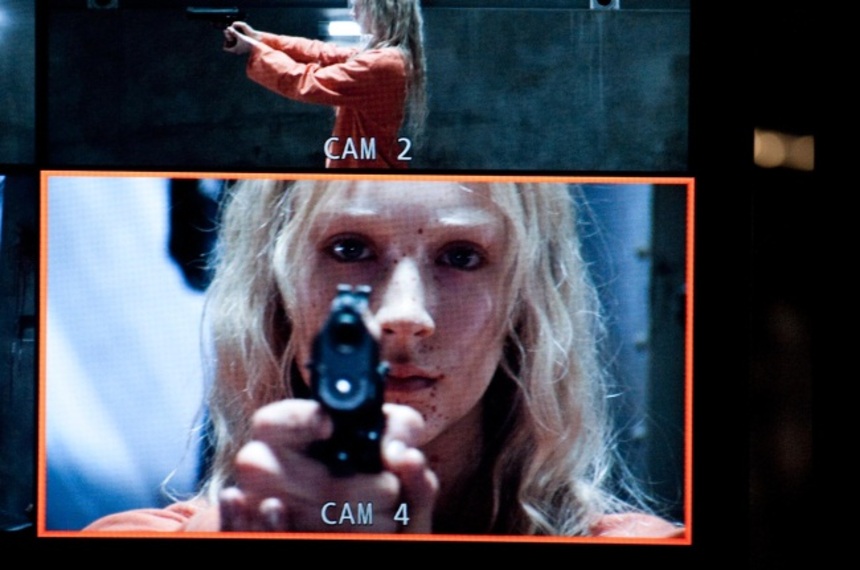 If you had asked me a year ago if Joe Wright (Atonement, The Soloist) could make a more convincing and interesting action-thriller than Philip Noyce (Dead Calm), I might have laughed at you and very likely ignored whatever else you had to say.  But who would be right (and laughing) now?  Noyce directed the recent Angelina Jolie vehicle Salt, which is an obvious point of comparison for Wright's Hanna, but any recent entry in the ubiquitous 're-activated' super-spy sub-genre could suffice.  The point of differentiation is the pint-sized protagonist, here in the form of Irish raised, Saoirse Ronan.  The actress reminds me a lot, both in looks and talent-wise, of a young Sissy Spacek and perhaps Hanna is her Carrie.  While the trio of writers string together a collection of genre and literary nods as the story unfolds - the film echoes everything from Frankenstein, Red Riding Hood, The Bourne Franchise, Leon and (why not) Starman - yet Wright massages the final product such that it comes out the other side resembling David Mamet's idea (read Bambi vs. Godzilla or his manifesto to the writing team on the Unit) of a coiled, dramatic spring.  Wright further manages to integrate great stretches of stillness, and some almost meditative cinematography that feels like warm blanket between episodes of kinetic violence set to the thundering beats from The Chemical Brothers, who musically trump both The Social Network and Tron in one fell swoop breakbeat.  The screen-filling title card slams up abruptly after a quiet hunt and kill in the arctic, and that that is how the film is.  It gets its point and its thrills across and gets out of there, not much fussing or mussing about otherwise.  It may be ephemeral, but it is immediate and completely engrossing while watching.
The story involves a young girl raised away from society by her rogue-CIA agent father (Eric Bana), but taught everything from five languages to weapons handling, close contact fighting, and all about the Russian Space program.  She is an empty vessel taught the specifics of self-sufficiency with the option for revenge on the CIA handler, Marissa Weigler (Cate Blanchett sporting a feminine power-suit and a crocodile smile) who killed her mother.  When we first meet Hanna she is all skill and no experience; deadly with a knife or a bow or a gun, but not having the apron strings cut quite yet by her trainer/father.  If our experience makes us who we are than who is Hanna?  She has a decidedly lethal skill-set waiting for a field-test, but has never experienced music or a kiss.  She yearns for all of the above.  The film opens the day Hanna decides to leave the nest by activating a homing signal to the CIA.  Her father runs decoy in the opposite direction.
From that point forward Hanna is propelled into the outside world, mainly running from the woman she looks to assassinate, from a bunker in Morocco, up through Spain and finally into Germany.  Along the way she spends time briefly with an English family (solid support from Olivia Williams, Jason Flemyng and Jessica Barden) while being chased by the tightly wound CIA Bureaucrat and her psychopath for hire (a brilliantly cast-against-type Tom Hollander who really gets his Droog-ish mojo going.)  The action sequences are clean and physical, wonderfully void of the rapid-fire cutting or shaky-cam work ever present in American action-thrillers these days.  Perhaps all that praise of the 'single-take beach scene' in Atonement emboldened its director to lay a distinctive stamp on his foray into this genre.  It is not quite the game-changer of something like Die Hard or The Matrix, but there is a lesson here in making electronica relevant again as a metronome for action movies.   At several points the film could have been called Run Hanna Run - and with Cate Blanchett's red bob hairdo, it is meta-amusing to imagine Franka Potente as the villain here (after all, she was in the The Bourne Identity also, and the facile precis of Hanna is Bourne Meets Lola.)  Despite Blanchett's dodgy-yet-interesting southern-fried accent, she brings so much to the equation, that it makes you weep for the missed opportunity for something this intense in that last Indiana Jones flick.  The devil is in the details, and just watching her brush her teeth in this film is character revealing.
The question of parentage, identity, and factors beyond Hanna's control are hinted at but are never to pointed or threaten to bring down the pace of the film and all the principal actors get their essence up on screen, ever so slightly beyond simply being types.  Character is even developed during the action scenes, and I'd like an 'Amen' for that.  As to Ronan, I cannot wait to see her Badlands.
Sign-In to Vote
Tweet 0 Submit

"...kinetic violence set to the thundering beats from The Chemical Brothers, who musically trump both The Social Network and Tron in one fell swoop breakbeat."
If I wanted to read post nerd-gasm hyperbole like this I'd go to AICN. Writing like this plus the vitriolic Sucker Punch coverage leave me feeling like I don't know what this site is about anymore. I can just say it seems that a bunch of bad blogger habits are leaking in the windows from the inter-webs.

A fair criticism, GarM. This film kinda inspires that, Hanna is actually a well constructed arthouse-action nerdgasm. I assure you though, when I make that kind of statement, it is with good reason...ie. The music is used so bloody magnificently (yea, it's showy, but in a very well executed way).

In terms of bad blogger habits, I've been here a while. I don't read AICN or any of the other geek-movie-sites, so its a strange version of digital osmosis if that is the case.

If you want a simple correlation, I wrote both these reviews really early in the morning, with less than 24 hours between the film and writing, a bit more percolation would always help, but (alas) it is not always possible.

Rest assured, however, your criticism is taken constructively.

Twitch has many good writers on film but often they are so damn fair and balanced about stuff I get nothing from it. I pay attention to the writers here and when some passion sneaks into their writing it signals something to me. Don't be afraid.

Kurt, I wanted to thank you for a measured and thoughtful response to my criticism.

My pleasure. One certainly should have thick skin when writing in any internet forum, but that shouldn't mean a thick head about things, or general inflexibility. Feedback is always appreciated.

(Making the internet civil, one post at a time)

This is why I'll never stop coming to Twitch. Cheers, fellas.