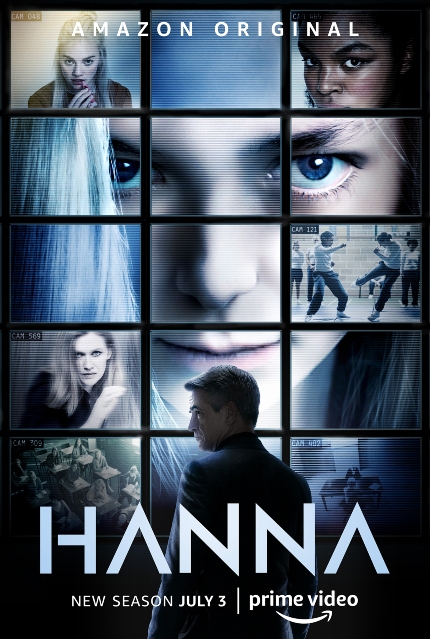 Hanna
Season 1 now streaming on Amazon Prime Video. Season 2 will be available to stream as of Friday, July 3, 2020.

"Written nearly entirely by David Farr, who co-wrote the screenplay for the film and created the series, the first two episodes retread portions of the original plot with a few twists," as I wrote last year. After watching the third episode as well, I concluded: "Watching wanton bloody slaughter and the terrorizing of innocent civilians in public places by shooting weapons in their general direction and setting off tear gas canisters really doesn't do anything for me anymore, except make me nauseous."

I struck the series from my watch list and thought no more about it until preview screeners for the new season arrived. Dutifully hate-watching the remaining five episodes, I found my resistance to the formula lessened to a degree with the seventh and eight episodes, which led to my watching the second season, which opens up the series to a greater extent.

The two most significant new players are Clara (Yasmin Monet Prince), who was whisked away from a secret spy facility by Hanna to live in the woods at the end of the first season, and seasoned white guy John Carmichael (Dermot Mulroney), introduced as a middle-management spy chief who has been charged with returning order to the spy facility, whose principal aim has been to keep young girls in drugged captivity, while training them to eventually become assassins.

It's akin to slavery, which is never specifically mentioned, though their inalienable right to freedom is frequently mentioned, before those in authority dismiss it and kill some more people. In its first season, Hanna revolved around cold, nasty people who viewed human life with no reverence or respect whatsoever. Anonymous armed agents, passing civilians, and supporting players were all treated as fodder for the assassination machine that kept grinding away.

The blood machine keeps grinding away in the second season, though a greater range of human emotion seeps into it. It doesn't exactly warm up, but it becomes more thoughtful at times, and seeks to make wider use of its running time to explore what, exactly, creator David Farr and his creative collaborators want to say about the unsavory people in positions of power who have lost all fellow feeling.

Hanna is no longer the wide-eyed innocent who wants to know her place in the world. She knows what she must do, but she has trouble convincing others to accept it. Marissa is more weary than ever, and she expends much energy in trying to make a connection with a more grown-up Hanna.

The stand-out character for me is John Carmichael. As portrayed by the versatile Dermot Mulroy, he's the type who has gotten a long way by killing people with kindness, only resorting to murdering them if he doesn't get what he wants. His smile is terribly menacing, and always chilling. (To circle back for a moment to Mireille Enos' character, her smile is always patently fake, and she uses that as a disarming weapon.)

The action sequences are well-constructed, and there are plenty of them to keep things hopping, all set in a rich variety of landscape, from beautiful forests to bustling European cities, if you can deal with the overwash of needless killing, of course. The world, indeed, can be a very cruel place, especially on modern streaming services.

Do you feel this content is inappropriate or infringes upon your rights? Click here to report it, or see our DMCA policy.
Amazon Prime VideoDavid FarrDermot MulroneyEsmé Creed-MilesMireille Enos