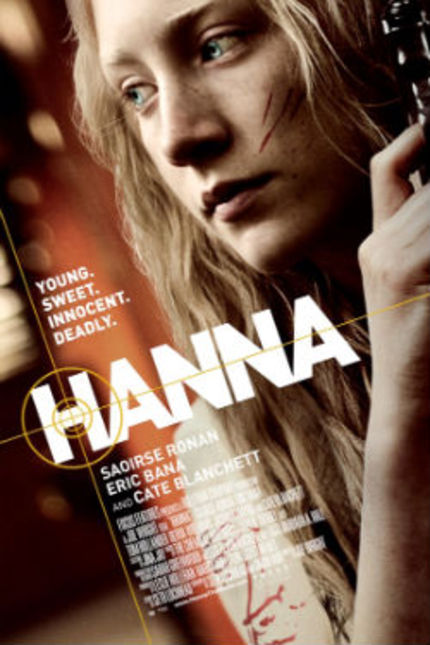 Our thanks to Diva Velez, who reports back from the New York junket and red carpet of Joe Wright's Hanna. Local journalists were given very little time in the round tables for the film but, true to form, Velez made those moments count. Check out the results below.

The Lady Miz Diva:  I must ask about The Chemical Brothers.

LMD:  At that point in the film when their music really hits, the entire audience has the same reaction; everyone's head starts bobbing.

LMD:  How did you approach them about coming onboard to score Hanna?

JW:  I called them up.  As I say, I met them nearly 20 years ago now at their very first London gig which was at a club called Rah-Rah's above a shoe shop in North London.  It was a fucking shitty club with sticky carpets and nasty graffiti in the toilets.  It always used to be referred to as a "coke-and-knives" club.  But it wasn't that night, that night it was kind of different and I was a groupie from then on, really.  So I've known them for some years and I called them up and I said, "D'ya wanna do this film? I've got this script."  I've been looking for a project to do with them for a long time.  I have quite an eclectic music taste and I love my classical, but I also love my techno, techno, techno.

LMD:  The rhythms of the score are very insistent and I wondered how it affected the way you presented the action?

JW:  Well, they had a couple of the pieces of the music written before we started filming, and so we had a big sound system on the set and we would play the music as we were shooting, so it gave the actors a kind of rhythm.  We did the same thing on Atonement as well.  I'm one of the best-paid DJ in the world, I think sometimes.  Actually, that's not true; DJ's get paid really well.  And during post-production we had a very close relationship working together, sending rough cuts of scenes and they'd send rough designs of music and we'd go back and forth like that.

LMD:  What were you watching or reading that got you into the mindset of the action you had to produce with Hanna?

JW:  I was looking at two films actually.  Although they were films I'd referenced from my childhood, like David Lynch in particular and Hal Ashby's Being There.  I think the character of Hanna is very much like Chauncey Gardiner; the kind of "holy fool" character, seeing the world without any preconditioning.  Before shooting this I was also looking at Pasolini's Theorem, the film with Terence Stamp where he kind of appears and no one knows who this character is and he has this extraordinary affect on all these people around him, but not through anything he says necessarily, but through their projecting onto him.  So, I kind of liked that for Hanna.  But in terms of shooting action, I was very scared of the action stuff.  I didn't know that I could do it, and so I tried not to think of action as fighting.  I just tried to think of action as an extension of choreographed blocking and the organisation of figures in space, and therefore was looking at films like Robert Bresson's Pickpocket, because the sequence where the pickpockets are working the train station seems to me the most beautiful piece of elegant and economic action although no one's actually punching each other.  It's not about violence, but it still has stories told through the organisation of figures in a frame.

LMD:  But you have got an amazing fight choreographer in Jeff Imada.

JW:  Absolutely!  And a huge credit goes to Jeff!  Jeff Imada is a genius.  I think he has over 400 credits, including the Jason Bourne films and his style of fight choreography is a sort of martial arts-meets-street fighting.  He started very much with me and Saoirse -- the character development came out of her physical development -- so we first of all started talking about how she breathed and breathing techniques and rhythms and it's kind of like meditation, I suppose.  And we started talking about her balance and core strength and posture and economy of movement so that she never moved unless she had to.  There's no extraneous movement.  And then we built the character from that kind of physical place.

LMD:  Last time we met you mentioned he added a particular visual to the film.

JW:  There was a stunt that he thought of.  When we did the container park sequence and Guy {Heeley, 1st AD} and I were going, "We need a good stunt here.  What should we do?"  I said I wanted her running across the top of the containers and he came up with the idea when she got to the last one, another container's put in the way that kind of divides them.  So that was his.  He came up with a couple of others which would have been lovely to do, but unfortunately we couldn't afford them.

LMD:  I find it really hard to believe you managed a PG-13 rating.

LMD:  I feel like it could have gone this way or that.

JW:  It could have gone this way or that, I think, and it could've been a lot more violent.  But I really wanted to reach a wide audience and I thought Hanna the character might have quite a lot to offer younger people, so I wanted to make the film open to them, too.

The Lady Miz Diva:  I'd love to hear about filming that amazing tracking shot through the bus terminal.

Eric Bana:  Look, it was a huge challenge, but it was one of the most exhilarating things I've gotten to do in a film.  You know, it's scary on the one hand when the director tells you the fight you've been learning is going to be all in one shot.  But to a large degree, it's kind of the antithesis to how those kinds of movies are usually made, so I was absolutely so excited to get the chance to do it.  And it's that rare environment in movie-making where the crew really does become ... it becomes sport, and you're a football team and everyone has to be bang-on for a take.  We shot that in magic hour and we only had a window of about an hour or 45 minutes to get it, to nail it.  I think we did 6 or 7 takes with no real time to review each take at the end.  I think Joe said it was take 2 or 3, one of the early ones.  So it was really exciting.

LMD:  So how much rehearsal did you have for that one crucial shot?

EB:  Scarily not a whole lot.  We rehearsed in general and we had a lot of fight scenes, so we got to a point where we were able to learn choreographed stuff really, really quickly.  So in actual fact, it's more important that you get proficient at the fighting and then learn the choreography almost close to doing it so that it's fresh, rather than learn the choreography two months earlier.  Cos the other danger is that you get so set in your rhythms, that -- as we did on the day, as well -- we then changed it.  Actually on the day when the camera can't get there for that, so it's gotta come in later and this now has to be that.  So you actually have to have the ability to go with the changes at the last minute, as well.

LMD:  I loved the relationship between Hanna and her dad.  Would you as a father have been able to let that innocent child press the button that begins the end of the life they lived together for so long?

EB:  Yeah, when she's about forty.  I hide the buttons in my house.  I thought it was a really cool device.  I also liked the fact that she finds it and then it's her decision to flip the switch, which was a really cool touch.  I enjoyed that cos it was a very important {moment}.   The heart of the movie is that she's the one that decides to set in motion the chain of events that's gonna potentially lead to her death.  I remember when I saw it on the set the first time, I'm like, "Is this it?" and Joe's like, "That's it."  I said, "That is so cool!"  I love that it's such a switch.  It's a switch, switch, you know?  Like a remote control aeroplane kind of switch, but I thought that was a good device -- a literal device and an actual device.

The Lady Miz Diva:  When we first met you spoke about Jeff Imada a little bit and since then he and I have spoken and he's your fan club.  Tell us about training with him and meeting with the martial arts legend Dan Inosanto?

Saoirse Ronan:  Well, I only met Dan Inosanto once but he was a lovely, lovely man.  I actually began training at the Inosanto Academy in LA, so it was a great place to start cos that's where Jeff is based.  He basically designed a very individual fighting style for Hanna.  When I went back to Ireland that was what we worked on.  There were different fight moves that I learned, but it was put together in a very fluid way and that's something that Jeff does very well, he's very, very talented.  I worked out in the gym for about 2 hours every day.  I got muscle definition and that was something I wasn't used to at all.  I was suddenly stronger, you know?  I was starting to hold myself differently and walk in a different way.  It's a very empowering feeling when you've stepped out of the gym and you've had a really intense training session.

LMD:  What was your favourite style of martial arts?

SR:  I like the push kick, actually.  Isn't it awesome?  And I like using the bamboo sticks, as well.

LMD:  As Hanna seems like a rare action film for girls ...

LMD:  For ladies, I wondered what you hoped ladies would take away from Hanna?

SR:  Strength, I guess.  I don't wanna sound too cheesy or anything ... I can sound a little bit cheesy.  When I walked away from that film -- I've only seen it once, but I was very excited.  I don't think the character of Hanna necessarily changed, which I kind of like.  I don't know about anyone else, but it's not like she really has an arc.  She goes through these experiences and she's sent on a mission to get rid of a particular problem, which is Marissa Wiegler, and once she does that that's kind of it.  She's a blank canvas and I think people can kind sort of paint whatever they want on to her and I like that about her.  I like that she stays they way she is.  She stays different and kind of weird and she stays a freak.

LMD:  Were there any films that you watched to get you into Hanna's head?

SR:  Joe got me to watch Being There, with Peter Sellers. That was more of a character study, I guess.  He's this man who hasn't really been involved in society ever and now suddenly he's the center of attention and has to deal with people a lot. It was a good thing to watch.  I didn't really watch any action films, just Being There.