Now on Blu-ray: THE VELVET UNDERGROUND, Into a Cultural Revolution

Todd Haynes' absorbing documentary gets the Criterion treatment, with choice extras and an audio commentary with the director and the editors. 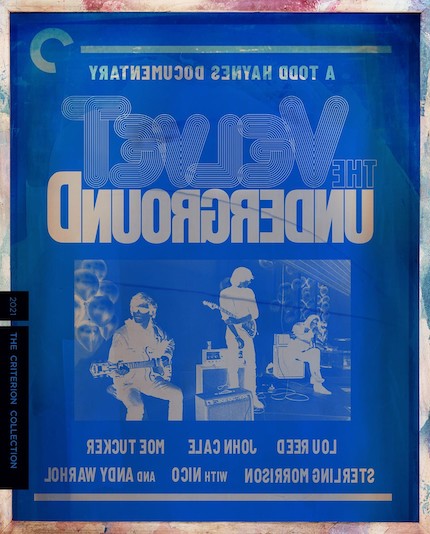 The Velvet Underground
Now available from The Criterion Collection.

Diving deeply into an incredibly fertile creative era, The Velvet Underground reflects the spirit of the New York underground movement, refracted through the lens of filmmaker Todd Haynes from a modern-day perspective.

The film enjoyed its world premiere at the Cannes Film Festival in Spring 2021, later played at the New York Film Festival, and then debuted globally on Apple TV+. In my Screen Anarchy review, I noted the challenge of wresting films away from personal expectations and memories. Todd Haynes "lulls the viewer into a pleasantly informative overview of the (relatively) short-lived band's career before more fully showing his hand by constructing a mosaic that reflects a wider river of influences that changed the course of the 1960s counter-culture."

Watching the film again on a newly-released Blu-ray from The Criterion Collection, I chose to listen to the audio commentary by Haynes, together with editors Alfonso Goncalves and Adam Kurnitz, which is essential for anyone with the coin to buy the disc. Haynes explains that he was approached about making the film several years ago.

As a huge fan of the band, Haynes was excited and immediately agreed, contacting his longtime editor, Alfonso Goncalves, about collaborating again. They were both preparing to make Dark Water, though, and so Goncalves recommended Adam Kurnitz, with whom he'd recently worked on Jim Jarmusch's Iggy Pop music doc Gimme Danger. Haynes outlined what he wanted to do with the film, and then Kurnitz set to work, constructing the first portion of what became The Velvet Underground.

The audio commentary continues as the three creative collaborators talk about how and why they made the film, a few pleasant disagreements, and a preponderance of mutual agreements on various aspects of choosing the format, which includes a great deal of visual material, from still photography to avant-garde films of the era, to illustrate and illuminate the interviews that were conducted, largely in 2018, and photographed by ace cinematographer Ed Lachman.

The supplements include outtakes of interviews that were shot for the film, including the legendary filmmaker and teacher Jonas Mekas (20 min.), who died the following year; actress Mary Woronov (13:35), who was a constant presence in Andy Warhol's Factory during the 60s; and musician Jonathan Richman (15:51), who happily got swept up into the Factory at the age of 16. Each provides a different perspective: Mekas, from his position as a filmmaker contemporary; Woronov, from her position as a woman who was not always treated with respect; and Richman, an awe-struck teenager who can now explain why the music was so revolutionary in its composition and structure.

The supplements also include a 49-minute interview by Pitchfork's Jenn Pally in 2021, conducted via videoconference with Haynes, Cale and Tucker. Pally moderates with good, insightful questions, which spurs along an invigorating and insightful conversation into the film and the underground movement from which it sprang.

If you're curious about the film that keep popping up through the film, Criterion has kindly included the helpful supplement, "Avant-Garde Films," which includes two films by Jonas Mekas, totaling about 20 minutes, and Venus In Furs, by Piero Heliczer, and runs nearly 22 minutes. Even though avant-garde films are not really my jam, I appreciate having them here, and I watched for academic interest in further understanding the creative environment of the era.

A printed booklet is also included with the Blu-ray, reprinting Greil Marcus' excellent essay, "A Ride on the Velvet Underground," which is an essential read.

My own interest in The Velvet Underground dates back to 1978, when I picked up a used copy of the
double-album 1969: The Velvet Underground Live, first released in 1974, and promptly picked up every other record by them that I could find, playing them endlessly, to the irritation, I'm sure, of other members of my household. For me, the music has always felt simultaneously ethereal, haunting, and vital, so I am grateful to have this Blu-ray, which now empowers me to irritate my neighbors endlessly.