Director Todd Haynes pays tribute to the influential rock group in a documentary that is more than a music doc, now streaming on Apple TV+. 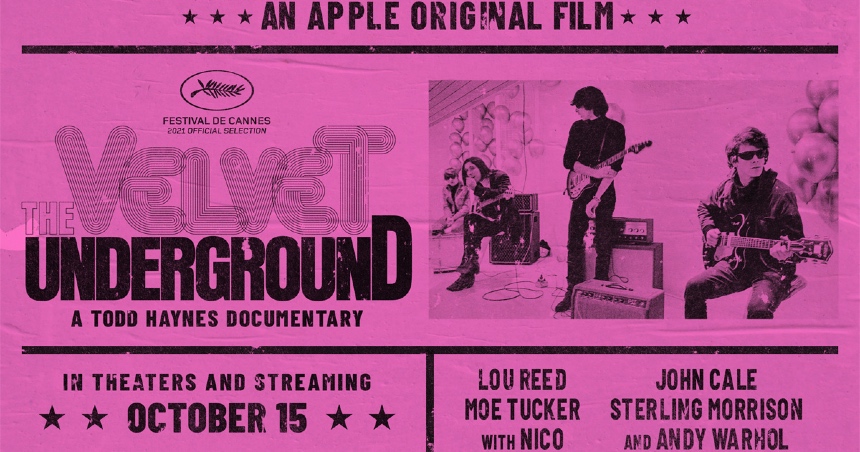 Some films are difficult to wrest away from personal expectations and memories.

Director Todd Haynes' Superstar: The Karen Carpenter Story (1987), Velvet Goldmine (1998), and I'm Not There (2007), serve as potent examples of the filmmaker's approach to musical influences and his artistic ambitions to subvert expectations through the adhesion of his personal perspective to his subjects.

So, even though, from outward appearances, The Velvet Underground may resemble a more conventional film, sticking to an anticipated narrative, much like his recent Dark Waters (2019), Haynes instead lulls the viewer into a pleasantly informative overview of the (relatively) short-lived band's career before more fully showing his hand by constructing a mosaic that reflects a wider river of influences that changed the course of the 1960s counter-culture.

It's very much an NYC film, in a manner similar to how The Velvet Underground could only have flourished artistically in Manhattan. Lou Reed, John Cale, Sterling Morrison, and Moe Tucker came together from different backgrounds and different musical disciplines and experiences, and were able to hone, refine, and expand their artistic consciousness thanks to the patronage of Andy Warhol, who ruled the Manhattan underground in that era.

Filmmaker Haynes gathers interviews with Cale and Tucker, the surviving members of the group, along with a select group of people who were there to bear witness to a phenomenon that never became very popular. Even years later, when I first heard their often transfixing music, they were little known, and were only likely to be recommended by friends.

By my entry point to their music in the mid-70s, Lou Reed was an established solo artist, and John Cale had released a string of urgent solo albums. The Velvet Underground's songs appealed to my adolescent sensibility at the time, though now I find that it resonates more deeply and more widely through my consciousness.

Todd Haynes notes the fate of all his interviewees and other key subjects in his documentary, as any good documentary filmmaker should do. By that point, he's also made his latest work of art.

Do you feel this content is inappropriate or infringes upon your rights? Click here to report it, or see our DMCA policy.
Apple TV+documentaryThe Velvet UndergroundTodd HaynesUS