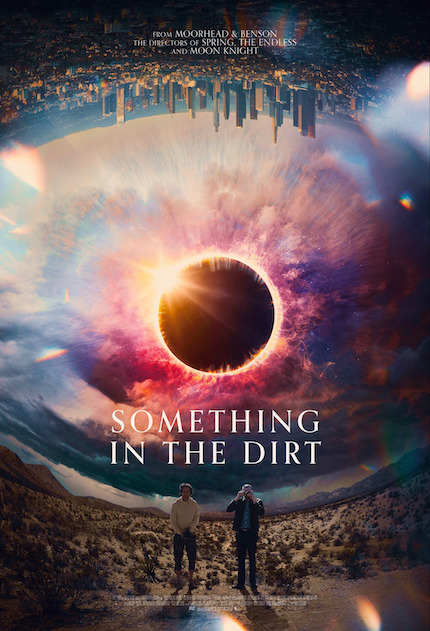 The latest film by Justin Benson and Aaron Moorhead prompted our own Shelagh Rowan-Legg to conclude her review thusly: "Delving once again into the metaphysical and its shadowy yet pervasive hold, Something in the Dirt takes a labyrinthian walk through the minds of two lonely and somewhat shifty men, something of a return to Benson and Moorhead's indie roots and yet an expansion on the unique world they've created in their films. Again asking questions to which they know there are no answers, and finding the weirdness on the journey." (Read her review from Sundance in its entirety here.

Very recently, Flanagan conducted a post-screening Q&A with producer David Lawson, Aaron Morehead and Justin Benson. Happily, the filmmakers have passed along a video of their conversation! Shot by a friend of the filmmakers (Smiling Dave?) the conversation is compelling and it's well worth a watch.

The video is down below, then get Something in the Dirt for your personal perusal on the platform of your choice.

Do you feel this content is inappropriate or infringes upon your rights? Click here to report it, or see our DMCA policy.
Justin BensonAaron MoorheadSarah Adina SmithComedyHorrorSci-Fi