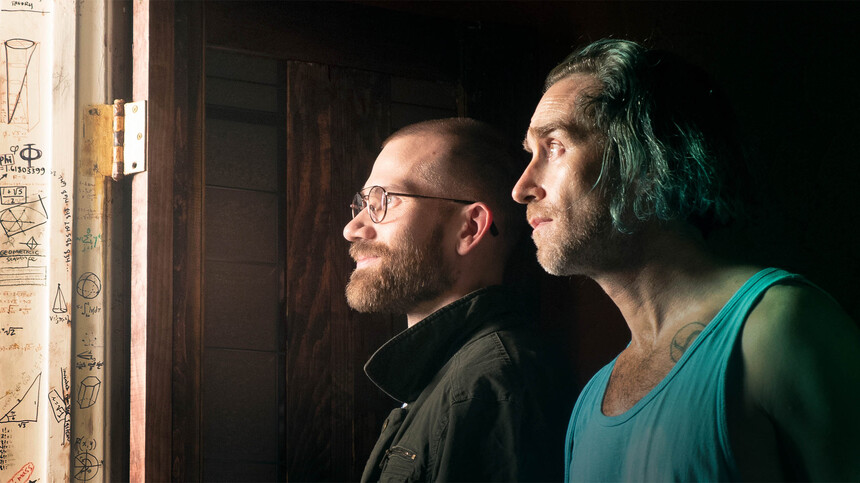 Isolation can do funny things to the mind. Even if you like spending time alone, isolation, and the silence that comes with it, is something different. Rather than calm and contentment, it can breed fear, distrust, and obsession. It can make you hallucinate with your eyes, ears, and mind. It can make you believe what you shouldn't and couldn't. It can make for very strange bedfellows. You have energy and thoughts with nowhere to go but the strangest shadowy corners, both metaphorical and all too real.

Filmmaking duo Justin Benson and Aaron Moorhead (Spring, The Endless), like many during the past two years, turned the pandemic and its accompanying restrictions into an opportunity to explore another part of their story world, this time from the (dis)comfort of home. Something in the Dirt looks inward, and upward, at the obsessions that can pick away at our individual and collective sanity, how we find meaning in symbols that we create ourselves, and the rooms of our beings that manifest on the outside.

Levi (Benson), a man with a troubled past, is on his last few months in Los Angeles, a city that has not been kind to him. But his temporary neighbour John (Moorhead) is kind, or at least seems to be, offering him some used furniture to tie Levi over until his anticipated departure. They develop the kind of friendship that comes from close physical proximity rather than perhaps any mutual interests or compatible personalities; they are both poor and carless in an expensive city with bad public transportation, isolated from any possible real human connections, and not by their own choice. An easy commaraderie forms in absence of anything else in their respective lives.

That is, until they witness a strange phenomenon in Levi's apartment. Levi had seen a few strange things before (there is something weird in a room too big for a closet, too small for a bed), things that give him pause. But then he and John see something alltogether unexplainable, and both being amateur photographers, decide to record it - for posterity? For exposure? Los Angeles is known at least for earthquakes, but that wouldn't explain what they keep seeing, and as two people without much else in their lives, this quickly becomes their focus and obsession.

John and Levi choreograph this odd and awkward dance in fits and starts; the more they learn about each other (mainly through spying and secret investigations), the more they are both wary, yet they have no one else to turn to. Like a some kind of clingfilm or thin rubber tightening around them, their only solace comes from engaging with this phenomenon that alters itself, expanding at strange angles and places, imitating the men's state of mind. Their have moments of philosophical musing and heartfelt confession, but it's always undercut by something unseen, dazzled by the proverbial and literal light that blinds them to the distrust and darkness waiting in the shadows.

Filmed almost entirely in and around an apartment, the few moments outside in the city almost reinforce what a Los Angelean film this is, despite rarely seeing it; or really, any city in which anonymity becomes something of a burden, especially to those who cannot afford to live there. The time of day, day of the week, all meld together as the men fall into this pattern of existence as they await another sign. The only play to look is up, at the sky, an urban one where light pollution means those few stars and the moon bear the burden or carrying too much meaning.

Structing the story around a documentary, layers within layers of Levi and John apparently reenacting what happened in the beginning, John and the apparent crew of this documentary discussing this footage, with notes and pseudo-diary entries (something of a nod to the novel House of Leaves). We never know what the truth is: what footage is real, what Levi and John are doing over, how accurate it is to their memories. The particular phenomenon they witness is both a delight and a distraction from each door it opens, into a room in which the characters can hide their growing madness.

Delving once again into the metaphysical and its shadowy yet pervasive hold, Something in the Dirt takes a labyrinthian walk through the minds of two lonely and somewhat shifty men, something of a return to Benson and Moorhead's indie roots and yet an expansion on the unique world they've created in their films. Again asking questions to which they know there are no answers, and finding the weirdness on the journey.

Something in the Dirt