Review: In SALOUM, Rules Are Bent and Broken With Aplomb 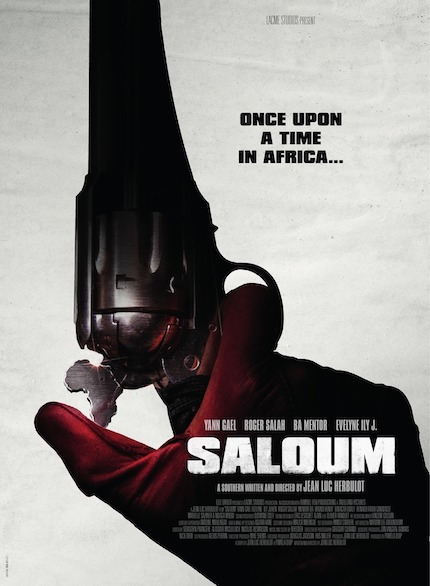 The Saloum Delta in Senegal is a land of cannibal myths and cursed kings.

Nowhere is this more true than in Congolese director Jean Luc Herbulot's supernatural skinwalker of a film that brings West African mythology to the criminal getaway thriller. Saloum layers in a healthy dose of the Agatha Christie 'whodunit' murder-mystery party, before shifting gears to whirling Diola dervishes, gris gris sorcery, star crossed lovers who flirt in sign language, even a child-soldier revenge drama.

With three iconic leads supported by a host of interesting faces, Saloum brings its own brand of cosmopolitan style, Pan-Africa by way of Paris, to the table.  As the fella says, "Stories about heroes travel faster than bullets." There is a superb bit of screen legend making going on here: The Bangui Hyenas.

Cool and sensitive Chaka (Yann Gael), Mister T with a frosted beard and aviator shades Rafa (Roger Sallah), and dreadlocked Shaman Minuit (Mentor Ba), piggy-back a heist of narco gold in the chaos of a coup d'état, they drop 'death cards' like candy before making a quick hop over the border for clean getaway.

All is not so easy, however, as vehicle trouble forces an unscheduled landing in the remote and isolated swamps, beaches, and island region, navigated only by quads and canoes, where the River meets the Sea. A regroup and hunt for resin and fuel to fix their plane lands them at commune slash vacation resort where it is unclear on whether or not they blend in or stick out, as the other denizens have their dramas and stories as well. There is a landslide of unspoken of backstory here, but the filmmakers let the actors body language and the audience imagination do the heavy lifting, keeping the pace fleet and the form functional.

With its pounding surf, sodium vapour night-lighting, a bevy of handsome overhead shots, and a devil-may-care willingness to stuff 75 years worth of global genre cinema (from Leone and Kurosawa to Miike and McTiernan) into 84 minutes, Saloum may be ragged around the edges at times, but it is never, ever, boring. Filming the lion's share of the story in a single location, a destination sea-side resort, channels its own kind of energy, the energy of the land itself. It first offers space for the characters to breath and the story to build, then as an action-abattoir for their sacrifice or comeuppance.

The director and his creative partner, Paméla Diop, have stated that their film is not a heroic movie, but a movie about heroes. Heroes that we have not seen before. The revenge story at its core taps into the anti-hero western vibes that can be set anywhere from Australia to South Korea.

Saloum is a loving home for this vision in Senegal. The filmmakers have a loving awareness of pop cinema, but are in no way beholden to it. Rules are bent and broken with aplomb. I cannot wait to see what they come up with next.

Do you feel this content is inappropriate or infringes upon your rights? Click here to report it, or see our DMCA policy.
Evelyne Ily JuhenJean Luc HerbulotRoger SallahSenegalYann Gael