The feature-length debut by Tom Hardiman delivers a cross-over between Agatha Christie and Gaspar Noé in a single-shot murder mystery. 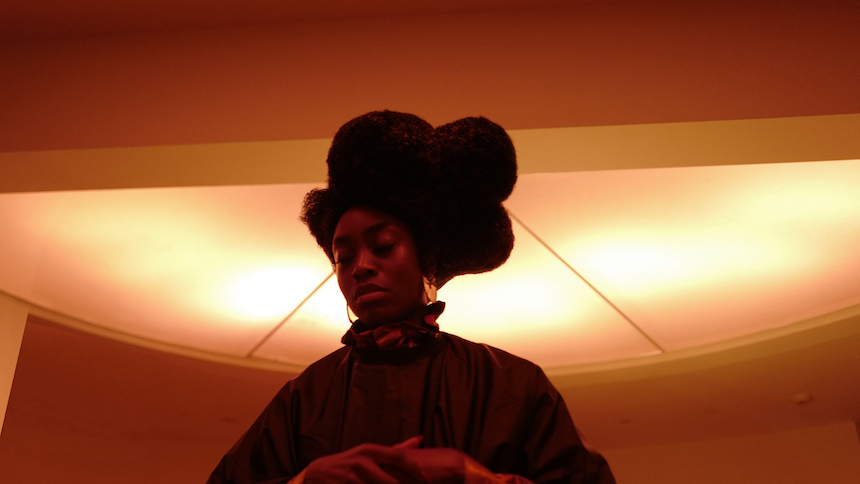 Hardiman takes a very British genre -- murder mystery -- and gives it a showy redo. The director leaves little room for imagination when demonstrating how Agatha Christie would look on Gaspar Noé. The British humor that comes along with the film is just a side dish.

The single-shot murder mystery takes place during a cutthroat hairdressing competition. The playful and inventive opening title scenes play hairdressing riffs on a James Bond-like opening,  teasing a witty and amusing approach to the genre.

It turns out the initial tone of the scene is misplaced when hairstylists Cleve and Divine begin discussing a corpse on the premises. In addition to finger-pointing and a guessing whodunnit, Cleve starts going off the rails with outbursts of anger. Despite this, she remains committed to completing her masterpiece that she thinks should win her the competition.

The plot starts moving with competitors and their models crossing through corridors and engaging in interactions while awaiting the investigation to wrap. The camera floats through dark, dimmed corridors always pinning behind somebody. When not chasing anyone through the cramped arena space, the cinematographic mode switches smoothly to observational scanning of dialogue exchanges and bickering.

As more characters enter the picture, different personality traits emerge, extending the suspense about whether the killer still lurks in the hallways. As the guess-a-slayer game continues, nerves start to loosen, spats turn physical, and a new protagonist emerges. Rene, who sports a perfectly groomed sexy Santa image, becomes the protagonist, the string-puller in the thickening plot.

His current partner was a lover of the deceased colleague Mosca. To add insult to injury, the victim has been ruthlessly scalped before the showcase of perfectly sculpted coiffures. As Rene's private and professional lives cross wires, his current partner, with whom he is raising a child, appears increasingly distressed.

While confusion and paranoia boil between contestants and their models in a crime-scene cabin-fever situation, Medusa Deluxe's form remains perfectly coiffed. Cinematographer Robbie Ryan, whose previous credits include American Honey, The Favourite, and C'mon C'mon, steals the spotlight with the logistics of steady-cam.

Ryan snakes through the hallways in a seemingly frictionless single shot, showcasing his perfectly honed craftmanship. The cinematographer spices up the experience with an additional variety of shots, including an elevating crane shot, without breaking the real-time chain of events. Editor Fouad Gaber ensures that the illusion of a single-shot extravaganza is preserved.

The cinematography tends to draw too much attention to itself and the atmospheric lighting, to the point that the film telegraphs echoes of Gaspar Noé´s Climax. Besides the visual razzle-dazzle, Hardiman's debut is undeniably British, with kitchen-sink banter between the contestants who double as suspects.

Nevertheless, the script starts to lose steam halfway through, and runs on fumes in the last act. The finale ends with an anti-climatic denouement and a friendly nod to Gaspar Noé's psychedelic penchant. With intriguing opening credits and Hardiman clearly not wanting to take a lo-fi bow, Medusa Deluxe ends with a nice closing musical number that feels like a reverse-engineered Climax. And serves also a celebration of the achievement.

Moreover, Medusa Deluxe can also serve as a reminder when one-shot movies shifted from avant-garde cinema to popculture territory.

A24 has acquired North American rights for Medusa Deluxe.

Do you feel this content is inappropriate or infringes upon your rights? Click here to report it, or see our DMCA policy.
Locarno 2022murder mysteryone-shotsingle-shotThomas HardimanClare PerkinsKayla MeikleLilit LesserDramaMystery