Master provocateur Gaspar Noe returns with Sofia Boutella and a cast of non-actor dancers to spike the punch and see what happens. 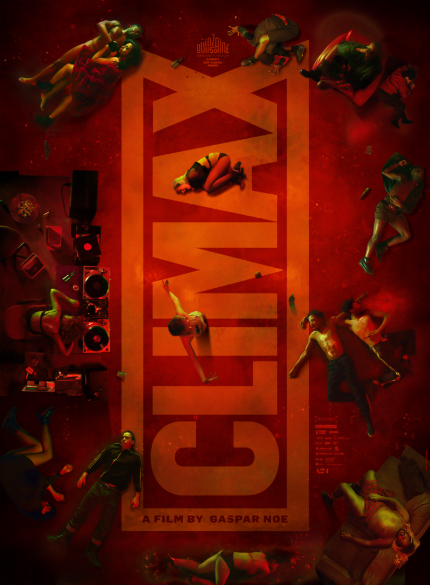 Like previous Gaspar Noe joints, the film opens pretentiously with a startling and beautiful image and pompous title cards. Fragments of film credits appear as the dancing crew is introduced, stylishly so of course, on an old-school television that is bordered by horror titles on VHS and hardcover.

Quite a bit of time elapses and it is much further in that the film title itself, and cast finally make their grand entrance. Like his previous drug narrative Enter the Void, the title credits alone are a spectacle; equally as gaudy and colourful an aesthetic as any graphic design can be; tattoos of the trauma in-store.

The dance crew are French; proudly so, as the film boldly announces with French flag almost always initially in shot. It makes sense: this is a crazy production, written in a few days, and shot in a few weeks. The cast are mostly dancers first and amateur actors second, but it works and they should be proud.

These people, sober and with their baggage, horniness and individual pasts talk and dance, holed up in a practice hall while a snow storm rages outside. They practice hard in hopes to win a competition in America, but somebody has spiked the punch. Who that is barely matters though given that it is a sane proposition to wonder, and sanity is the first thing to go when the narcotics take effect.

Climax is sublime; it demonstrates supreme beauty and technique as the dancers perform. First their actual routine, a powerfully energetic synchronised effort that takes both heart and soul. Later when they devolve, it is a free-form sort of jazz, performed on the brink, and is equally beautiful in its own grotesque artistic way. Climax is a kinetic horror, the movement of both characters and the camera capture a motion of control that spirals into unrestrained atypical violence.

Climax is an allusion; it is already a horror-trope setting; trapped by forces out of your control in a winter storm and due to the effect of a very potent dosage of a powerful hallucinogen. There are also nods to the VHS titles the starting scenes contained.

Selva (Sofia Boutella) thrashes around a room with a painted-on-forest wall, and her free-form mania is instantly reminiscent of Andrzej Zulawski’s masterful film Possession. Climax kind of is that demonic force. Losing control of your senses and your physical self, a demon driven by a deep dark desire unleashed. Culpability, confession, desire and repression all come flooding to the fore for some truly disturbing scenes. This is thanks to fucking litres of lysergic acid diethylamide. Take your worst night out and multiply that ten-fold.

As the viewer of Climax, you are a sober observer of this horror. As the camera warps and spins we witness their personal hell, but never the trippy drug aesthetic or effects they may be feeling or seeing, and this is all the more worse. This is stark and there is a reality to it. Moments build to an intensity where their drug-addled state leads to a chaos that is impossible to predict. During these parts I felt genuinely unsafe in the cinema for no discernible reason.

Climax creates such a tense and unpredictable environment that bleeds out of the screen at just what humans are capable of, and it is kind of terrifying. Fuelled by Vice, both figuratively and literally as they helped fund the film, Climax is a compelling discordant macabre dance, gothic art updated for millenials. Climax is a work of art in its own right.

Review originally published during the Toronto International Film Festival in September 2018. The film opens in select theaters in the U.S. via A24 Films on Friday, March 1, 2019.

Do you feel this content is inappropriate or infringes upon your rights? Click here to report it, or see our DMCA policy.
FranceGasper NoeRomain GuillermicSofia BoutellaSouheila Yacoub