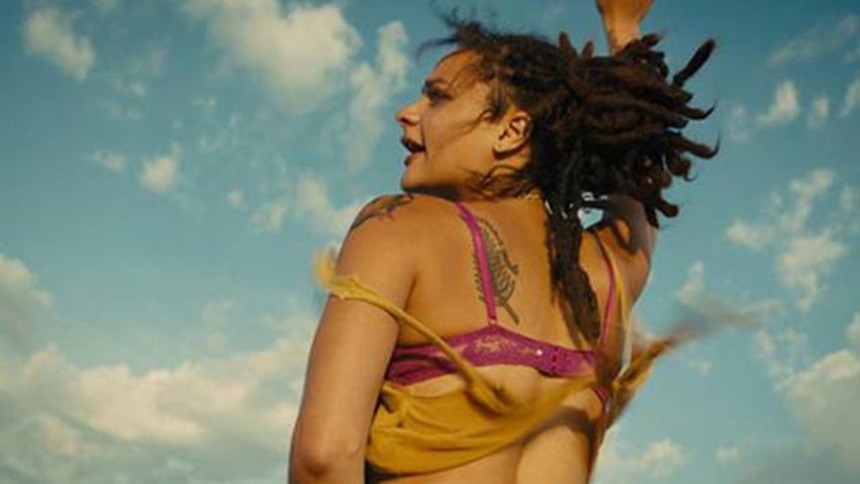 Only a few times in a generation does a film speak to youth in a lasting and powerful way. Films like Rebel Without A Cause, Easy Rider, and Kids all tapped into their respective contemporary consciousnesses with the effect of not just capturing the era for preservation, but also influencing the very generation of portrayal. With astonishing performances, remarkable use of music, and truly deft filmmaking, Andrea Arnold's American Honey has every potential to be that film for this generation. Perhaps unlike those films, American Honey also belies an optimistic message about youth and the American dream.

American Honey is the story of Star, an 18-year old girl from Texas who is stuck providing for her loser boyfriend's two young kids via whatever methods work. One day while scavenging a grocery store dumpster for food, she meets Jake, the charismatic leader of a group of nomad youth crisscrossing the American Midwest selling magazine subscriptions door-to-door to support their fun-loving lifestyle and try to save a little money (a real phenomenon that Arnold researched extensively for the film). Feeling an uncontrollable attraction to Jake and faced with no prospects to thrive or find happiness in her current situation, Star makes the enormous decision to jump -- landing in the van with this motley crew.

What follows for Star is a coming-of-age on the highways, rest stops, and cheap motels of Middle America. Her relationship with Jake is a difficult one, complicated by his 'who gives a fuck' attitude and his subservience to Krystal, the sex-infused boss of the magazine crew who keeps her distance from the team, forcing Jake to drive her from town to town in her white convertible while the rest of the crew packs into a passenger van. Jake is a natural born salesman but Star is convinced that the connection they share is real, even if she is unable to embrace his deceptive tactics for making money and manipulating people.

At its heart, this film is about the American dream; that any possibility is open to each and every person, no matter what difficult circumstances brought them to this point. But while the job sucks, the rooms are shitty, and the liquor bottles are plastic, there is nothing but optimism in these kids. They are in control of their destinies and can do whatever they want with their lives -- even if what they want right now is mostly to smoke pot, get drunk, fuck, and just have fun.

It is an enormous feat to portray this in an honest and believable way and Arnold and her team deserve the absolute highest praise for their achievement. This begins with the team of actors and the incredible debut performance by Sasha Lane as Star. It's easy to imagine a first-time actor struggling to pull off such an intense role (especially opposite two bona fide movie stars), but Lane fully inhabits Star and there is not one single moment of weakness throughout. Shia LaBeouf is perfect as Jake in his dirtiest and perhaps most honestly Shia role to date, lending just the right amount of star power to the ticket that will get the film seen by the masses that deserve to see it. Riley Keough continues to rise and her Krystal is the kind of character that demands to have an entire movie devoted to simply telling her story from her perspective.

There's not a weak link in the supporting cast of late-teens and early-20-somethings on the road, many of whom had never acted previously. Much credit goes to to the casting team that made the characters feel unique and just interesting enough to not feel overly manufactured. The "This movie was made by," closing credits points to just how important the actors contributions were to creating the realism of the world.

Sentimentality can be a tricky thing in storytelling but Arnold is able to employ it here without ever feeling trite or overwrought. Part of this comes from the audience's sense of future nostalgia that these kids will someday feel for these bonds they're forming once the realities of life and time have caused them to go too many years since they've reconnected with their friends. Part of it comes from the memories that everyone who connects to this film is sure to tap into of the time in their life that felt without boundaries yet completely unable to be appreciated as such. And part of it comes from the brilliant use of contemporary music throughout with one sing-a-long in particular the cinematic rival of Tiny Dancer in Almost Famous.

It cannot be argued that Andrea Arnold is a director at the top of her game. Just that she is able to tap into a sense of something so indelibly American is impressive. But to craft a story so touching, optimistic, and just plain beautiful is a feat sure to be appreciated and revisited by filmmakers and film viewers of this generation and for generations to come.

Do you feel this content is inappropriate or infringes upon your rights? Click here to report it, or see our DMCA policy.
Andrea ArnoldCannesRiley KeoughShia LeBeoufYouth