Pretty Packaging: The DRIVE Limited Edition Is Not Middle Of The Road

Ard Vijn
Editor, Europe; Rotterdam, The Netherlands (@ardvark23)
Tweet Post Submit
The United Kingdom-based distributor Second Sight is building quite a catalogue of excellent special editions. Their limited edition of Adam Wingard's The Guest turned heads with its extravagance and high pricing. Was that a film which warranted it? Even fans were divided and Second Sight promised to consider carefully what to do with future titles. Well... as a collector I could not be more pleased, as a string of great releases followed.

And quite possibly their finest special edition yet may be this one, of Nicolas Winding Refn's 2011 star-studded thriller drama Drive. Disc-wise it's just a Blu-ray and a 4K-UHD disc, but it comes with two books, one of which is a veritable bible for fans of the film. A few months after its release, this edition has sold out on Second Sight's own site, but it can still be caught in the wild for not too high beyond its original price.

And it has to be said: the packaging is one hell of a looker, with all that sultry gold and pink. So here is a gallery of shots. Click on the edge of the pictures to scroll through them, or at the center of each to see a bigger version... 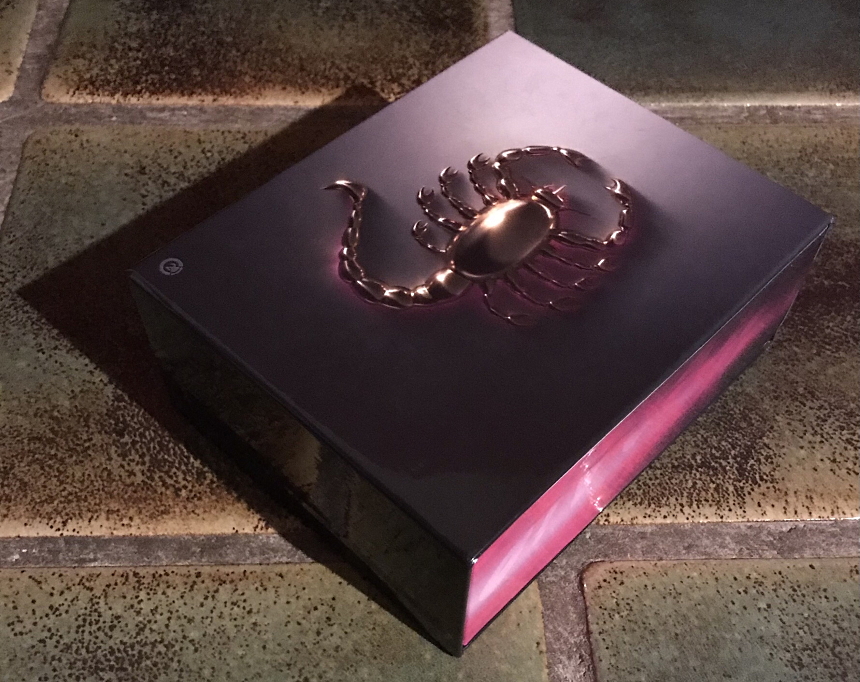 And here it is, a veritable tome. Heavy too, as bar the discs it's basically a solid block of paper.

Removing the outer slipcase shows that the contents are tightly held in an inner lid. I like this a lot. 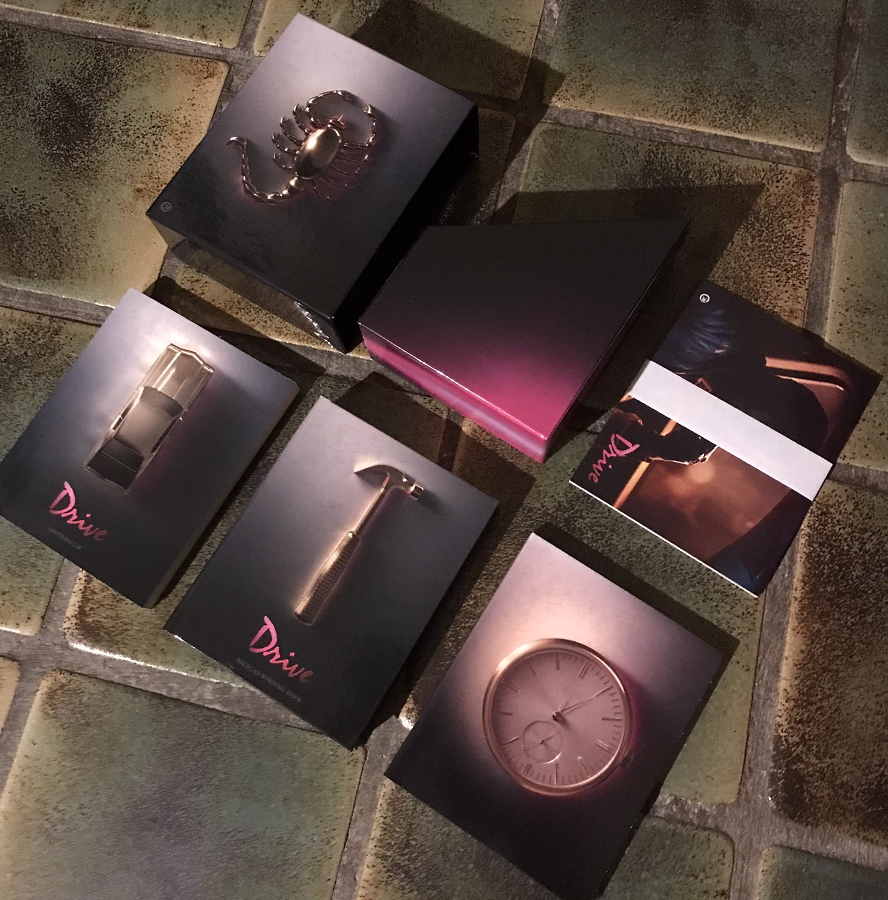 The contents taken from the box. You get a stack of lobby cards, the novel on which the film is based, and a big hardcover "making-of" book. 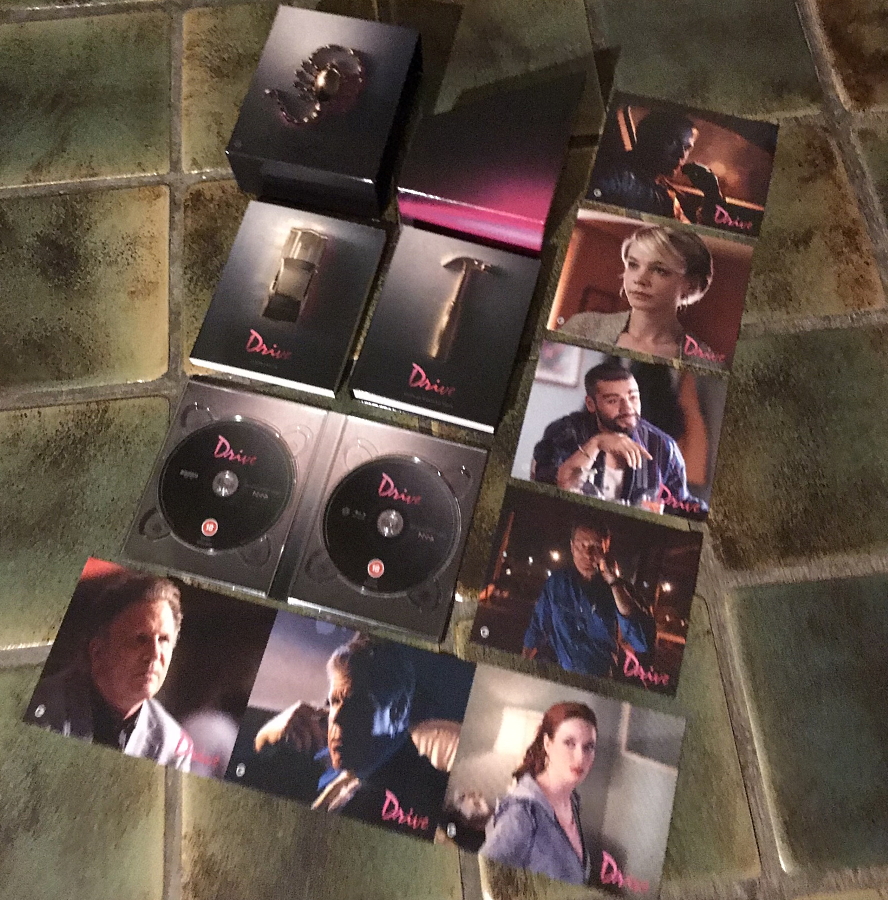 All contents opened and spread out. The discs are a Blu-ray and a 4K-UHD. 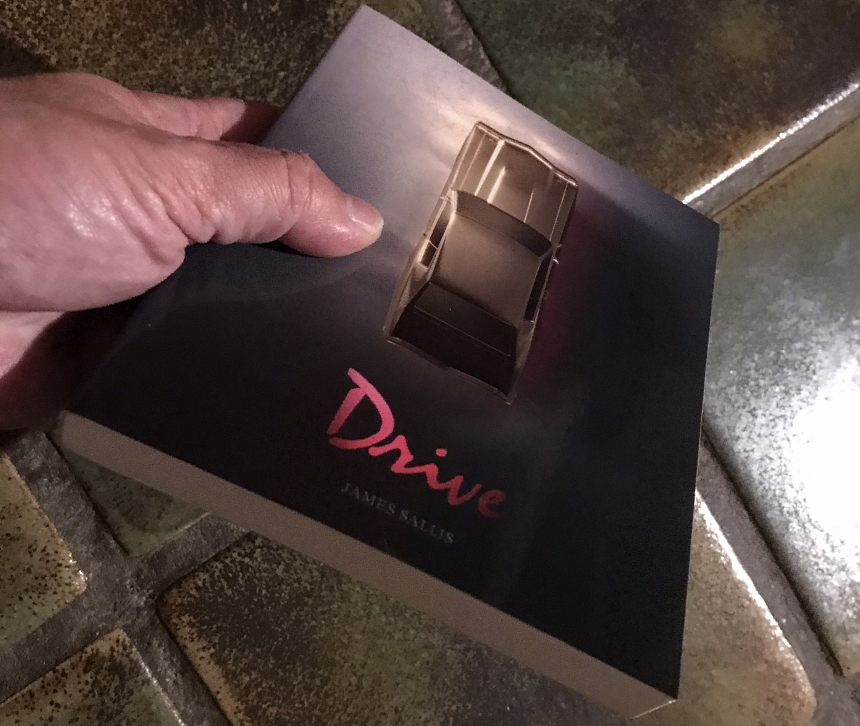 Book one: the paperback novel by David Sallis, on which Nicolas Winding Refn based his film. NOT a novelization. 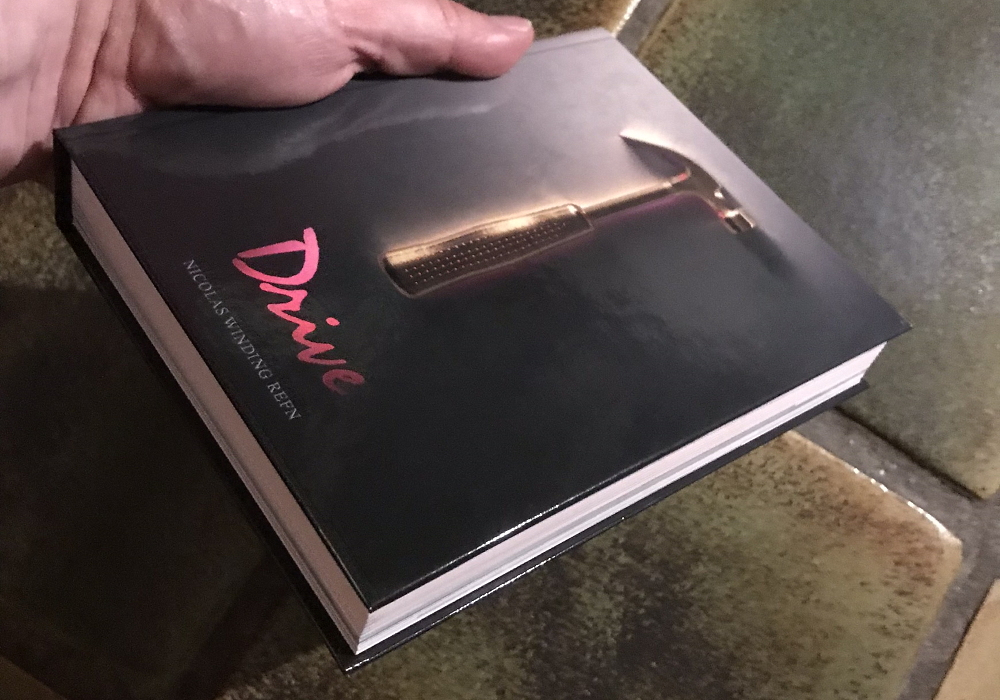 Book two: a 240-page hardcover book about the making of the film. By no measure can this be called a "booklet".

In it you get storyboards, essays, and interviews. It's pretty magnificent. 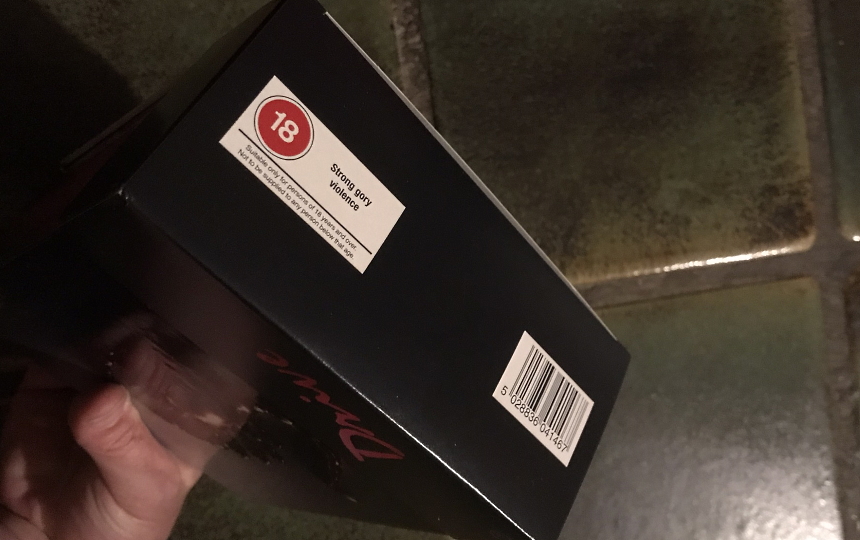 The big outer box is thankfully protected by another cardboard slipcase, and that one has the BBFC-ratings on it. 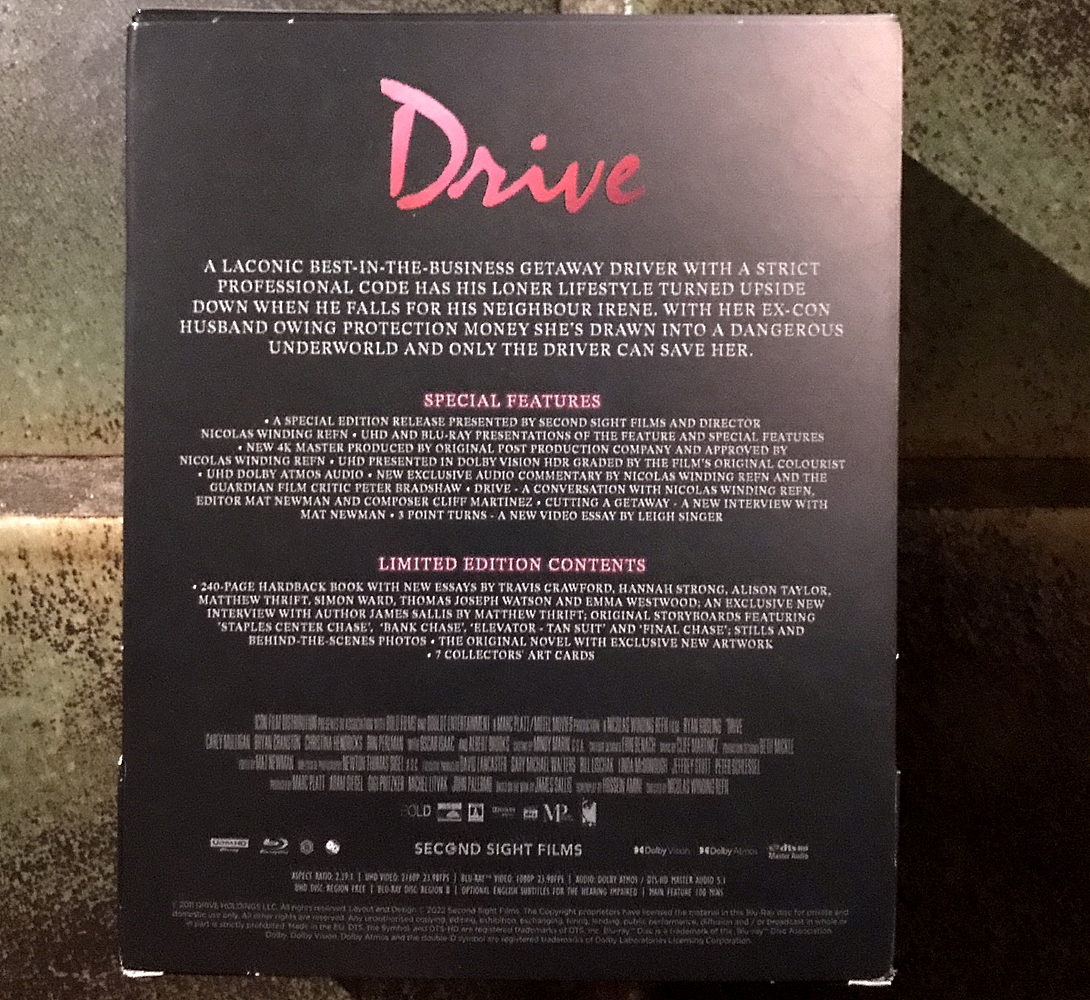 The (back)end of the slipcase, showing what's in the box and on the discs.
But the REAL (back)end is... 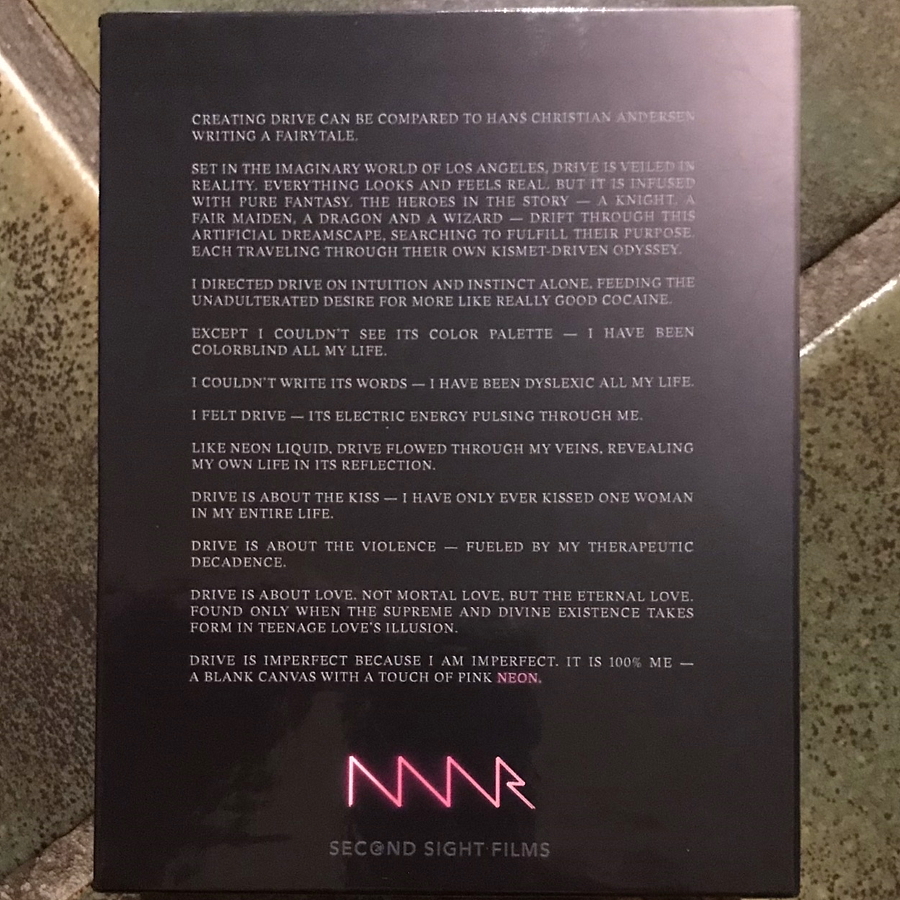 ... here, on the back of the big box itself, with a rather personal message by the director.

All in all this is an excellent release by Second Sight, and I'm keeping an eye out for what they'll be releasing next.