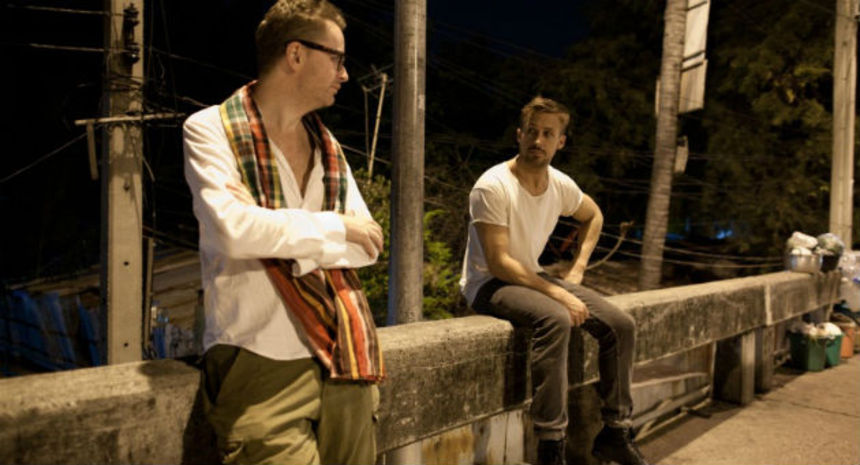 Note to filmmakers: If you capture the legendary Alejandro Jodorowsky in conversation with another filmmaker and he turns to the camera to ask you a question, be sure to lead with that.

Wisely, that's what first-time filmmaker Liv Corfixen does with her new documentary, My Life Directed By Nicolas Winding Refn. Jodorowsky is speaking with Nicolas Winding Refn, who appears to be seeking the older man's counsel. The veteran director dispenses a nub of wisdom, and then turns his attention to Corfixen, blithely ignoring conventionality.

There is no "fourth wall" in modern documentaries -- reality shows have broken our collective spirit, and we know that cameras are everywhere -- yet Jodorowsky's forthright inquiry sets the tone for the movie as a whole: it's awkward, unplanned, and thoroughly intriguing. Starting off as a home movie of sorts, Corfixen intended to document her family's experience in Thailand during the filming of Only God Forgives, featuring her husband Jang, as he's known to friends, and their children. That idea quickly morphed into a behind-the-scenes production documentary, which then morphed into something quite a bit more personal, based on Corfixen's belief that it would be more interesting to tell a more complex story.

The result is messy and compelling. Corfixen has complete access in their shared living quarters in Bangkok -- so, yes, we get footage of a famous film director in bed -- but on the set, she must retreat to a limited role, which begins to frustrate her. Is she being locked out of production meetings because she is the director's wife, or because she's a documentarian? Would anyone else have different access? How can she tell the whole story if the director declines to share it?

These are, of course, questions faced by every documentary filmmaker, in this case complicated by a long-term, very intimate relationship. By this point in their lives, Corfixen is well aware of the demands placed upon Refn; she herself has experience as an actress. But that doesn't mean it's any easier to deal with when you're thousands of miles away from home with your two young children, even if Ryan Gosling plays with them when he stops by for a script meeting.

As a followup to the more commercial Drive, Only God Forgives presented the director with all new challenges, which he met head-on ... except for the times when he questioned his own decisions, multiple times, in the privacy of his rented living quarters. That's the type of footage Corfixen captures, yet it never feels exploitative because she is simultaneously exposing herself and her own fears and frustrations. In that sense, it's a very brave film.

Perhaps the most appealing aspect of My Life Directed By Nicolas Winding Refn is Liv Corfixen's exploration of creativity from a domestic perspective that is in flux. Despite the fact that we, as an audience, know how Only God Forgives turns out -- love it or hate it, it's a provocative, unpredictable movie -- it's not altogether certain that Nicolas Winding Refn, Liv Corfixen, and their children will ever be the same again.