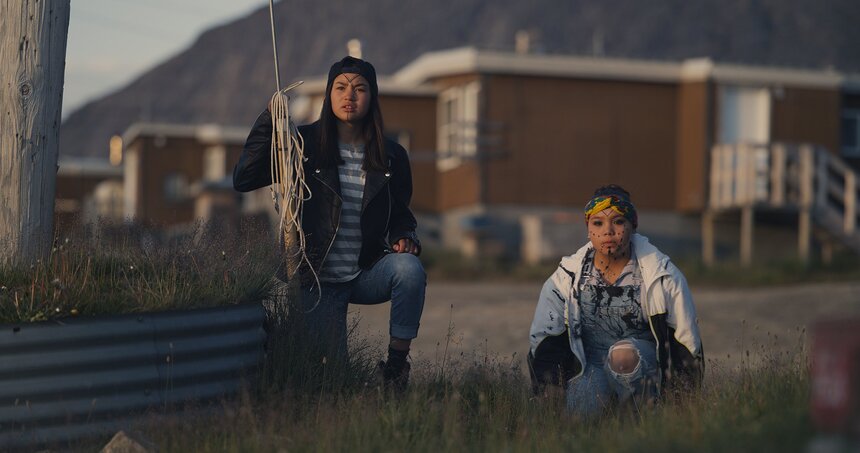 Cinema is a window, not a mirror.

I find myself repeating this mantra a lot lately, as some aging corners of cinema culture become more and more myopic, complaining about lack of representation for over represented groups or so-called force diversity. One of the things that has always drawn me to the movies is the idea that I can step into an unfamiliar world and experience it through the eyes of those who live there. Thousands of movies later, one can definitely get jaded and start to feel like they’ve seen everything, which is why it’s so exciting when a project like Nyla Innuksuk’s debut feature Slash/Back comes along.

Set in the far northern Canadian territory of Nunavut, a vast and beautiful region that drapes itself cozily across the Arctic circle, Slash/Back tells the story of four teenage girls and their fight to save the world from an alien invasion and it is rad.

Maika (Tasiana Shirley) is a teenage girl with a burning desire to get the hell out of the remote hunting village of Pang. She and her friends, the posh Leena (Chelsea Prusky), rough and tumble Jesse (Alexis Wolfe), and the slightly younger, doesn’t-thing-Pang-is-so-bad Uki (Nalajoss Ellsworth), spend their days roaming The Land, mooning over dreamy boys like Tomassie (Rory Anawak), avoiding little ones like Maika’s younger sister Aju (Frankie Vincent-Wilfe), and just generally trying to find something to do. When that eternal struggle leads them to “borrow” a boat for a day out on The Land, things get very real, very quickly when something that looks like a bear but doesn’t act like a bear attacks Aju and nearly kills her before Uki scares it off with a rifle.

Whatever that thing is, it’s not happy and it wants to hunt. Fortunately for our young heroines, there are no greater hunters than the people of Pang. Unfortunately for them, tonight is the big square dance where all of the adults go to the community center and get smashed, so by the time the kids realize this is serious, they are on their own. They round up all the help they can get and decide it’s up to them to take care of business and off they go.

Something like a rural version of the ultra-urban alien invasion classic Attack the Block, Slash/Back does a similarly excellent job of establishing the characters and their surroundings and culture before going into the hardcore action. The relationships between the characters are as important and engaging as the threat of imminent annihilation, and the script from Innuksuk and writing partner Ryan Cavan is very flexible with these characters and their interactions, which is good because there’s nothing quite as awkward as teen slang written by adults. The girls have a goal, but nothing is too crucial to not be momentarily sidelined by petty jealousies or conflicting personalities.

It’s in these moments of interpersonal conflict and resolution that Slash/Back really finds its heart. The goal, kill the invading alien, is never out of sight, but these aren’t military girls under a single command, they are a bunch of teenagers trying to figure everything out in very quick form, so it is sloppy. Not every plan works, personalities don’t always click, teenage patience levels are extremely short, things get hairy fast.

One of Slash/Back’s greatest assets is just how much time and effort it takes to set the scene and explain the culture and layout of the town of Pang. It opens a window into this culture where this remote village houses kids with dreams of escaping to the big city, Winnipeg, like it’s the world’s greatest metropolis. Maika, whose father used to be the town’s greatest hunter but has fallen on hard times since his wife passed away, has to take up her father’s knife in order to become the woman she’s meant to be.

There is a wonderful gearing-up sequence in which the central quartet gather their hunting equipment to take down the enemy. It’s one the audience has seen a million times in a million films, but there is a feeling that they are leaving childhood behind. They decorate themselves using traditional face painting to indicate their ascension to womanhood, in this instance it looks and feels like a costume for war, and it is awesome.

Slash/Back doesn’t appear from a vacuum, Innuksuk wears her influences on her sleeves. Jesse is a horror movie fan and early monologues describing crucial sequences in John Carpenter’s The Thing becomes prescient later on as the alien attempt to take human form. Not only the visuals and mechanisms of the creatures owe themselves to Carpenter, the heavy synth score from Nunavut DJ group The Halluci Nation also feels very Carpenter-esque.

The creatures themselves take on several forms, from the above-mentioned not-quite-a-bear to a second not-quite-an-elk, and eventually Men In Black-style not-quite-a-human, all of which are very fun to watch, and boldly displayed in full daylight, eschewing the urge to shoot lower budget VFX in the dark to hide potential seams. It works, for the most part, and the resulting imagery is disturbing enough to justify the kids’ reactions. I believe some the later human forms of the alien were performed by Troy James, a Toronto-based contortionist best known for appearing in Steve Kostanski’s The Void, and Guillermo Del Toro’s Scary Stories to Tell in the Dark, but I haven’t found concrete confirmation of that.

Nyla Innuksuk has worked for a while in short films and music videos, but this is her first feature, and it’s an ambitious beginning to what I hope will be a long career. Her young cast, all of whom are feature film first-timers, perform admirably with just the occasional shakiness that almost ends up endearing us more to their quirks. It’s a bloody, fun time on a piece of land that doesn’t see the light of a cinema screen much outside of Canada, and I love that about it. Slash/Back straddles the line between E.T. and Attack the Block with grace and plenty of action, these girls kick a lot of ass and genre fans young and old should eat this up.

Do you feel this content is inappropriate or infringes upon your rights? Click here to report it, or see our DMCA policy.
Nyla InnuksukRyan CavanTasiana ShirleyAlexis WolfeNalajoss EllsworthAdventureSci-Fi