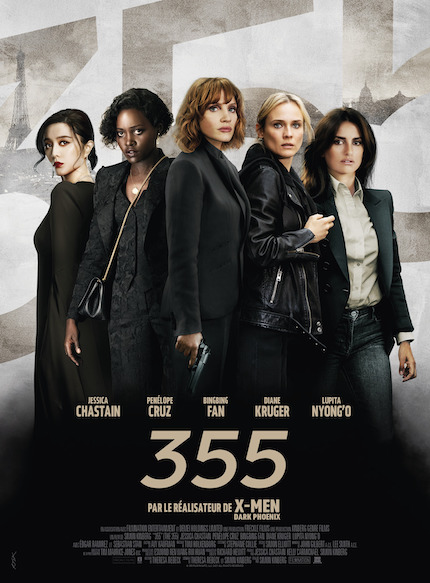 Despite a highly productive, lucrative career in Hollywood spanning the better part of two decades, commercially proven, four-quadrant hit-making, and audience-approving contributions to the now defunct X-Men franchise, writer-producer Simon Kinberg (Sherlock Holmes, Jumper, Mr. and Mrs. Smith) almost ended his own, nascent career as a director with the franchise-killing X-Men: Dark Phoenix in the summer of 2019.

While the X-Men remain offscreen in hibernation (Disney's Marvel Cinematic Universe awaits their arrival), Kinberg wisely moved on to a standalone, non-superhero project, The 355, a wildly uneven, cliche-embracing, sporadically entertaining super-spy team-up obviously meant to start a series or franchise of its own. Spoiler alert: Sadly, it won’t, for reasons both numerous and myriad.

At least initially, The 355 centers on Mason “Mace” Browne (Jessica Chastain), a CIA field agent who prefers to keep her personal and professional lives separate, up to and including a long-simmering romantic entanglement with her CIA partner, Nick Fowler (Sebastian Stan). While Fowler pushes for more, a matter of national security — a Great Whatsit that can change the balance of world power falls into the wrong hands — sends them from CIA HQ in Langley, Virginia to Paris, France using the old honeymooning couple gambit as a not unfamiliar cover. In Paris, Mace and Fowler hope to trade a backpack crammed with U.S. dollars to the current holder of the Great Whatsit, Luis Rojas (Édgar Ramírez), a Columbian national and intelligence agent, and make their way back to the U.S. of A. by the next day.

Their not particularly well-thought-out plan goes predictably awry, of course. Before the exchange can happen, a German agent/spy, Marie Schmidt (Diane Kruger), steps in, hoping to recover the Great Whatsit for her country’s government. That, in turn, leads to a long foot chase in and around central Paris between Mace and Marie on one side and Fowler and Rojas on the other.

Additional parties, some aligned with foreign governments, others aligned with an ultra-rich financier and arms dealer, jump into the fray. A Columbian agent/psychologist, Graciela (Penélope Cruz), with little or no field experience, attempts to bring Rojas home before events supersede her good intentions.

Trotting from Columbia to the U.S.A., Paris, Morocco, before setting for a stop-start third act in Shanghai, China, The 355 picks up a few more key characters, among them Mace’s former comrade, Khadijah (Lupita Nyong’o), an ex-MI6 agent and cyber-security expert, and later, Lin Mi Sheng (Fan Bingbing), a Chinese national and agent with a hidden, if wholly predictable agenda. Each stop allows for the usual mix of exposition, team bonding, and running firefights and/or close quarters combat between the newly formed super-spy super-team and a seemingly inexhaustible stream of disposable henchmen who perish in infinitely bloodless, stakes-free, PG-13 ways.

Kinberg leans heavily into his experience writing super-spies (Mr. and Mrs. Smith) and superhero teams (the X-Men series), mixing just enough granular background detail for the central characters to suggest there’s more to them than their positions as field agents/spies, their sharpshooter proficiency with firearms, or various styles of martial arts. It doesn’t always help, though, as Kinberg leans just as much into barely functional, cliched dialogue to presumably deepen character backstories and advance an otherwise over-familiar, surprise-free story. The 355 zigs (and zags) exactly where and when audiences expect, up to and including the Big Reveal that really isn’t.

All that unoriginality and predictability means that The 355 depends majorly on star power to get the plot through one rough spot after another. Luckily for Kinberg, Chastain, Nyong’o, Kruger, and Cruz give their absolute level-best to bring thinly written, underdeveloped characters to reel life.

Even then, Cruz suffers significantly from Kinberg’s decision to turn her into a field novice constantly fretting over her family back in Columbia. Individually and collectively, the cast elevates Kinberg’s banal dialogue and indifferent direction into watchable, diversionary, if ultimately disposable entertainment for fans of the genre or the cast.

The 355 opens in movie theaters on Friday, January 7.