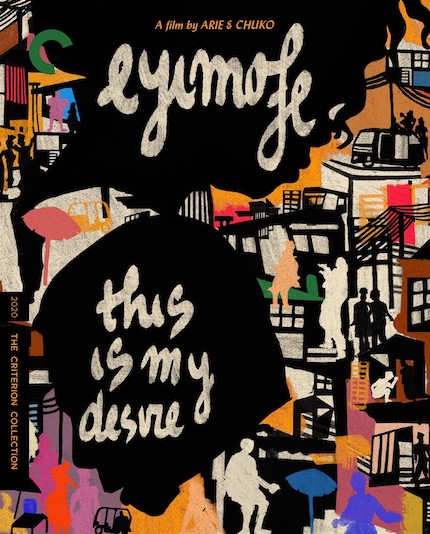 If the past couple years have felt like one long fever dream -- in which case, sympathies -- Eyimofe (This Is My Desire) may have slipped under your radar. If so, the Criterion Collection is ready to help by offering the film on Blu-ray in April 2022.

Per Criterion, the film "traces the journeys of two distantly connected strangers--Mofe (Jude Akuwudike), an electrician dealing with the fallout of a family tragedy, and Rosa (Temi Ami-Williams), a hairdresser supporting her pregnant teenage sister--as they each pursue their dream of starting a new life in Europe while bumping up against the harsh economic realities of a world in which every interaction is a transaction." The Blu-ray features a new 2K digital transfer, a new conversation with directors Arie and Chuko Esiri, three short films, an interview with producer Melissa O. Adeyemo, and deleted scenes.

In an impressive career of distinctively rebellious films, director Alex Cox made Walker, which is a biopic unlike all other biopics. I love Criterion's note: "Made with mad abandon and political acuity." Joe Strummer (The Clash) composed the score. The new Blu-ray edition features a restored high-definition digital transfer, an audio commentary, documentary, and other extras that sound quite tempting.

Nothing compares to seeing Frank Tashlin's The Girl Can't Help It on a big screen in a movie theater -- yes, I am bragging here, because I have enjoyed that pleasure -- but I imagine that watching a "new high-definition digital transfer, with uncompressed monaural soundtrack on the Blu-ray" should be the ultimate for anyone stuck at home, which is to say, everyone. Among the numerous extras is an episode from Karina Longworth's excellent You Must Remember This podcast on Jayne Mansfield.

Readers in the U.S. may have noted the April 2022 releases fall in a month during which taxes are due, which I know lays down a financial challenge for all of us, but may I offer three more reasons to wish you were independently wealthy? Criterion will also release Vittorio De Sica's Miracle in Milan (1951), Bertrand Tavernier's 'Round Midnight (1986), and a new 4K digital restoration of the stunning and soulful space doc For All Mankind (1989).