Directed by Péter Bergendy, Hungary's official submission for the Academy Awards is a period horror drama, fusing genre and arthouse filmmaking with a mainstream veneer.

Hungary, as well as France, decided to submit a genre drama into the Oscar race.

After his previous genre works -- romantic comedy, cold war spy film noir, and period thriller -- Bergendy decided to tackle horror, which was banned in socialist Hungary. The director frames the story with a bleak period in the country's history when Hungary lost two-thirds of its territory after World War I at the onset of the Spanish flu pandemic.

Tomás (Viktor Klem) had been fished out of a mass grave during the war and brought to life. He had a strange vision before being brought back among the living. Six months later, he is doing family portraits as a post-mortem photographer, providing a keepsake and a memento for grieving people.

A chance encounter with a 10-year-old orphan leads him to her village. Locals cannot bury their deceased who have fallen victim to the raging Spanish flu. as the ground is frozen solid. The dead are remaining in the realm of the living in the picturesque Hungarian village. Despite the macabre environment, the situation proves fruitful for Tomás' business, as he is hired to do a series of photoshoots.

After several portraits are made, Tomás starts noticing strange occurrences before full-blown supernatural forces start terrorizing locals in broad daylight. The outsider is blamed for disturbing the otherworldly specters and decides to investigate the situation to rectify the situation that is getting quickly out of hand.

The plot outline has the contours of template plotting, not necessarily a ghost story, as Bergendy, Piros Zánkay, and the film's creative producer Gábor Hellebrandt, the trio credited for the screenplay, throw more motifs into the mix. The father-daughter-like bonding of the leading characters or a sleepy town with buried secrets are the most prominent in the period folklore thriller about the collision of technology and the supernatural. 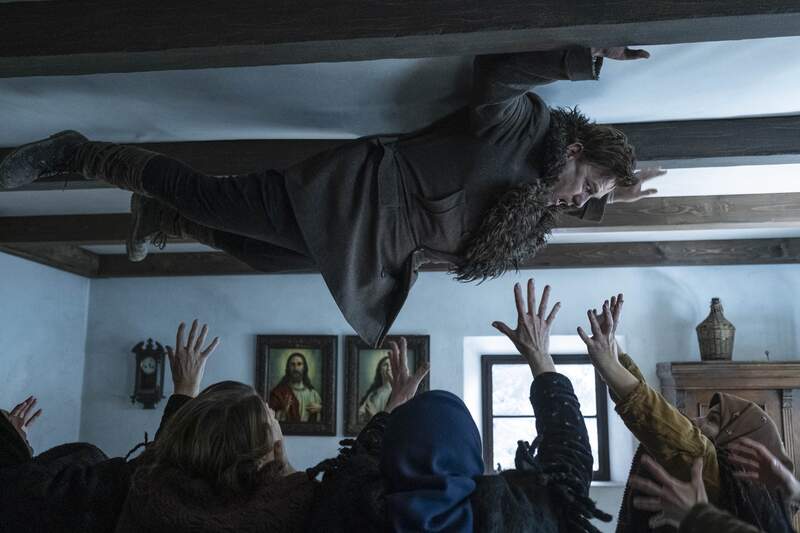 Bergendy has shown prowess in his craftsmanship, bending and fusing genres, in his previous directing efforts. Post Mortem displays similar polyvalence as the director reiterates some genre tropes while subverting others.

The film transcends the limits of a pure ghost story and conventional horror fare in a cross-over of genre filmmaking and arthouse cinema, boasting an appeal to the mainstream public. The film weaves social, psychological, and historical motifs, spiced up with delicate jump scares along with frenetic action scenes and coming-of-age melodrama in a post-modern cinematic patchwork.

The story of a traveling salesman/photographer with near-death experience dazzling countryside folk with new technology is more of a premise from different cinematic traditions. The amalgam of folklore and technology has been honed to perfection by Japanese filmmakers, not solely of the Ringu ilk.

Bergendy teleports the topic into a different historic era, although he preserves anachronistic effects reframing the target audience. Far from a cinema of nostalgia, Post Mortem is a modern piece of filmmaking thinly veiled as a folklore vintage.

The steely-tinged images of the snow-covered Hungarian countryside and monochromatic palette of the otherworld ventures display a gloss of a commercial fare lensed. The DoP András Nagy succeeds in an imitation of a Central European veneer of blockbuster, a strategy in line with Bergendy toying with tropes and styles.

Similarly, the art direction conjures up an illusion of a mainstream production design, even though the director cited budgetary constraints. Moreover, Bergendy as a graduated psychologist with a keen interest in the psychology of horror is embracing the symbology of the genre and archetypes.

As the final act approaches and the realms of the living and dead interlock, the director espouses a minimalist and a rather painterly approach, depicting the under(other)world paraphrasing horror classics and inserting intertextual references with a slightly surreal twist. At the same time, he counterpoints the pathos of the underworld scenes with a wilder extravaganza unfolding in the realm of the living in the climactic showdown. Not bothered to keep a straight face, Bergendy is not afraid to embrace pastiche and irony without satirizing the story.

The gravity and danger the protagonist experiences is undercut with an almost farcical tone, an anti-climax pits against the climax in real-time. Besides the visible testimony that the film crew had a good time on the set, Bergendy affirms genre tropes while subverting them at the same making the viewing experience enjoyable for genre connoisseurs and audience outside the ghost story bubble without alienating neither of them.

Post Mortem is the latest example of a hybrid of genre and arthouse filmmaking as the ossified hierarchy has been disrupted. Post Mortem transcends the traditional postmodern aesthetics,  resulting in a new modern concept of a cohesive blend of seemingly antagonist pairings of high and low, serious and comic, rational and supernatural, vintage and modern, genre and drama.

Bergendy's film comes closer to the borders of new fluid cinema, but does not experiment with the form and style in such a quasi-avant-garde manner as did his fellow countryman György Pálfi in an unorthodox adaptation of Stanislaw Lem's philosophical sci-fi His Master´s Voice. The restrained approach to transforming and bending genre and drama thus makes Post Mortem into a glocalized oeuvre blending a stratified audience.

The film has already a glaring testament to this achievement, as Post Mortem managed to net a sum of 10 awards at Toronto After Dark Festival (read Mack´s news) after winning the domestic national awards, the 2021 Hungarian Motion Picture Awards for Best Cinematography, Best Editing, Best Production Design, and Best Make-Up, which eventually led the committee to submit the film for the Oscars' race.

The film will next screen at the Tallinn Black Nights Film Festival, which runs from November 12-27. Visit the official festival site for more information.