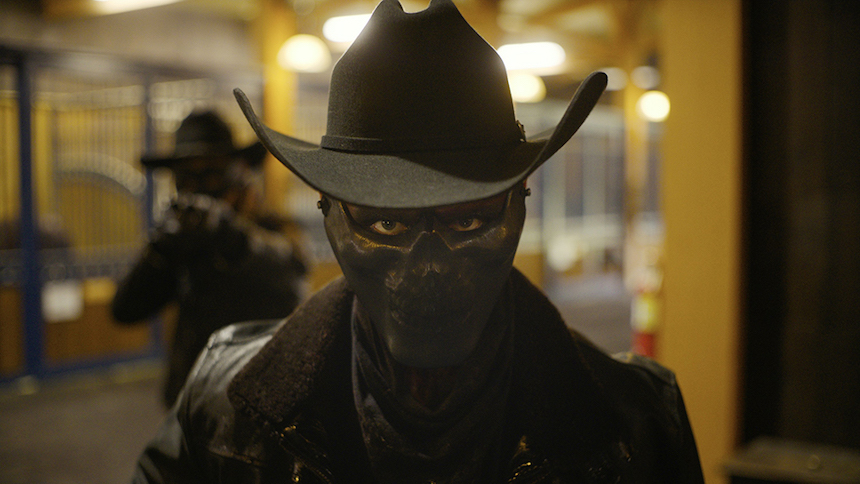 After two sequels (The Purge: Anarchy, The Purge: Election Year), and a prequel (The First Purge), in roughly two-year intervals, as well as a since-canceled, two-season cable series (2017-2019), The Purge franchise wraps up, at least until the rights holders decide audiences want more of the same (except different), with the fifth and final entry, The Forever Purge.

It's a semi-welcome return to the ultra-violent basics and crude, if effective, political commentary, which has made the franchise a decade-long hit with audiences and critics (some of them, anyway). Cathartic in series name and intent, the Purge series has echoed timely issues (e.g., class, race, rising authoritarianism), more often than not reflecting prescient concerns, funhouse mirror-style,  about our fragile, crumbling political, social, and cultural institutions.

In a sign of Purge things to come, the fifth entry opens with Adela (Ana de la Reguera) and
Juan (Tenoch Huerta), a married Mexican couple, making their way across the desert to the home of a coyote and an underground tunnel that will take them to the other side of the U.S.-Mexico border and presumably, economic opportunity and freedom from indiscriminate violence, a form of the American Dream that longer exists, if it existed at all, in the alternate America (the “United States of Hate”) of the Purge series. Their hopes prove to be only half-right: Ten months later, Adela’s working in a supervisory position at a slaughterhouse while Juan works as a horse wrangler and whisperer for the wealthy Tucker clan.

Led by a benevolent patriarch, Caleb (Will Patton), and his resentful son, Dylan (Josh Lucas), the Tuckers settle into a quiet night behind secure doors when the Purge, restarted after the series’s overarching villains, the New Founding Fathers of America (NFFA), white supremacists modeled on the modern GOP’s extremist wing, retake control of the country. For the NFFA, the Purge, a twelve-hour, overnight period where nothing’s forbidden and everything’s permitted, including deliberate acts of murder, serves to keep the general population controlled, culling the poorest and weakest from receiving government benefits, and almost as importantly, divided and distracted while they continue accruing wealth and power.

For the Tuckers, Adela, and Juan (they’re never given last names), Purge night goes without a hitch or incident. Everyone emerges unscathed, at least temporarily. For white supremacists and white nationalists both allied with the NFFA and partly outside the NFFA’s control, Purge night isn’t enough: They declare the title’s “Forever Purge,” promising to eradicate anyone they deem non-American (i.e., brown people) and exploiters of the poor, white underclass (i.e., the Tuckers).

With Dylan, who's both mildly racist and anti-Purge, forced into his father’s role, he manages to escape along with his pregnant wife, Emma Kate Tucker (Cassidy Freeman), and his sister, Harper (Leven Rambin), but not before Juan and his close friend, T.T. (Alejandro Edda), save the Tuckers. By putting themselves in personal danger, Juan and T.T.'s actions in turn solidifying a temporary alliance across class, ethnic, and gender differences.

Embracing a blunt-forced approach to story, character, and theme(s), series creator James DeMonaco bookends The Forever Purge with an intentionally ironic journey to the U.S.-Mexico border, this time in reverse. With the U.S.A. descending into violent chaos, the product of decades, if not centuries, of dysfunctional politics, racism, misogyny, and an unhealthy fixation on firearms (everyone’s either armed in The Forever Purge or can easily handle themselves in a firefight), DeMonaco all but gives up on his alternate near-future and American’s role in that future.

The only hope lies in our neighbors to the North (Canada) and South (Mexico). It’s a bleak, borderline nihilistic conclusion. Considering the last four, tumultous years, culminating in the January 6th Insurrection (The Forever Purge was made before the pandemic and was scheduled for release last summer), it’s not an entirely impossible one.

That, of course, doesn’t stop DeMonaco and first-time director, Everado Gout, from setting aside any political commentary and turning the back-half of The Forever Purge into a series of ever-expanding, interconnected firefights. That, after all, is what audiences have come to expect from the Purge series: crude, if occasionally accurate, politics, and action-heavy second- and third-acts to satisfy our individual and collective need for the equally crude catharsis of seeing random and not-so-random villains get their well-earned comeuppance in increasingly brutal, violent ways. In both cases, The Forever Purge unapologetically succeeds.

The Forever Purge is now playing in theaters via Universal Pictures.